Think UK manufacturing has a bright future? Then shout about it

Posted on 8 Oct 2015 by The Manufacturer

Executive director at Tata Limited and chairman of Tata Europe Network Forum, David Landsman, ponders the bright future of UK manufacturing and steps to be taken to achieve it.

I may not be the obvious choice to write for The Manufacturer. I’m not an engineer and the view from my office window is not a factory but a garden and a busy London through-fare.

But, working with colleagues across Tata’s European businesses, I get something of a bird’s eye view of manufacturing and it’s a very exciting one.

Looking from the outside in but with the opportunity to get into the detail, I’m convinced that there’s a great story to tell.

But it’s also true that those with an interest in the success of manufacturing need to think harder about how to tell it if the UK is to achieve – and sustain – its potential as a 21st century manufacturing power (or powerhouse).

I want to start with a couple of simple but powerful observations. Firstly, that most people probably find it impossible to grasp the unprecedented pace of technological change, so they may not be looking for the future in the right place.

The internet, for all its power, can be deceptively “conventional”. If email has essentially been just a quicker form of snail-mail, the next generation of technology is changing what we do (and who, or what, does it) rather than just speeding up how we do it.

And secondly, that manufacturing is fast becoming as much about R&D and IT as it is about making things; which means that if Britain wants to excel as a high-tech knowledge economy, manufacturing must be a significant part of our future.

What’s the evidence? Estimates suggest that by 2020, 50bn devices will be networked through the Internet of Things (IoT). Manufacturing will be a major beneficiary: smart factories could boost productivity by 30%. 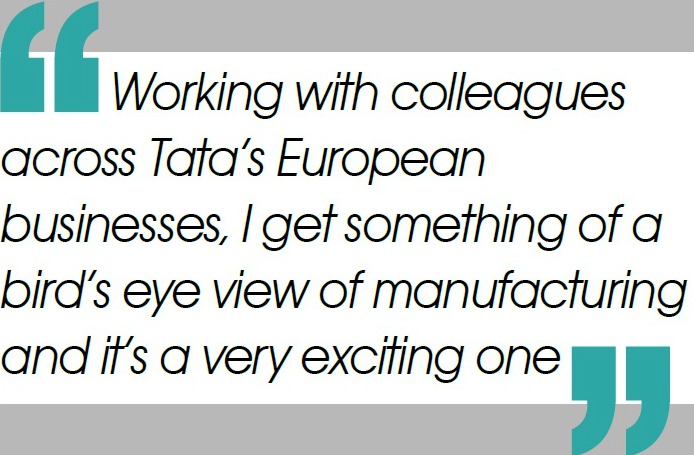 But it will also create new demand, not least in the automotive industry. Manufacturers need to seize this opportunity.

At Tata, we have for the first time appointed a Group CTO, Dr Gopichand Katragadda, with the mandate to find the next generation of innovations by leveraging the best collaboration between our 100+ companies.

His recent comment that, “an automobile is now a super computer on wheels” illustrates nicely the way he’s thinking. And it’s having the effect of bringing businesses with very different backgrounds together on the same playing field.

Tata Consultancy Services (TCS), for example, which has long been in the business of IT-driven business process improvement, now believes that most firms can increase their revenues through the right investments in the IoT.

There’s no doubt too that the IoT will have huge social benefits, like the technology being developed by Jaguar Land Rover to allow vehicles to report potholes to the local authorities, contributing to tomorrow’s smart cities.

It’s the broader contribution to the economy and society which is why it makes sense for Government to support innovation in IoT.

Industry will welcome the announcement of £40m to fund business incubators and research hubs covering healthcare and social care, as well as the separate collaborative pilot study on the potential of IoT in smart cities.

Big data is another area with huge potential benefits for manufacturing. For a start, the global market for sensors is expected to reach $95.3bn in 2015, and up to $154.4bn by 2020.

Research suggests that cloud-based manufacturing solutions can reduce IT infrastructure, maintenance and lifecycle costs of process improvement projects by 54%. Again, manufacturing must be part of this.

TCS is a major player in big data, and many of our “manufacturing” and “engineering” companies are increasingly dependent on big data.

Tata has recently established a new entity “Tata IQ” to invest in data collection and advanced analytics, a vital part of realising our ambition to touch 25% of the world’s population by 2025 through improving customer insight and satisfaction. 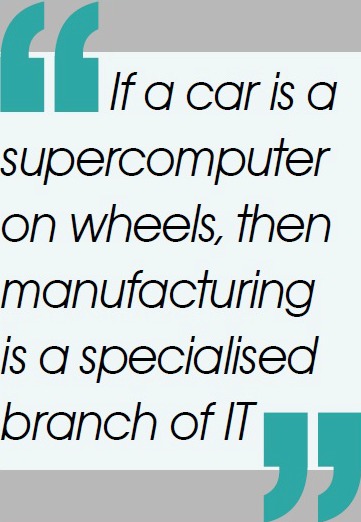 And, again, the wider benefits for society explain why it makes sense for the UK Government to have announced significant investments in big data R&D.

Servitization is another less spectacular but equally important way in which manufacturing today doesn’t look like manufacturing yesterday.

Many manufacturers, including Tata companies, earn an increasingly high proportion of revenue from services rather than the direct supply of goods.

This creates great opportunities for manufacturers, but considerable difficulties for economists who are at increasing risk of understating the contribution of manufacturing to the economy.

As CBI director-general John Cridland explained in his recent thought-provoking CBI 50th Anniversary Lecture, servitization, along with the trend towards outsourcing, means that the real share of GDP created by manufacturing is probably closer to 19% rather than the usually quoted 11%.

Great news, but of course no grounds for complacency. If a car is a supercomputer on wheels, then manufacturing is a specialised branch of IT. It is tomorrow’s world, not yesterday’s. And it offers opportunities for tomorrow’s workers. 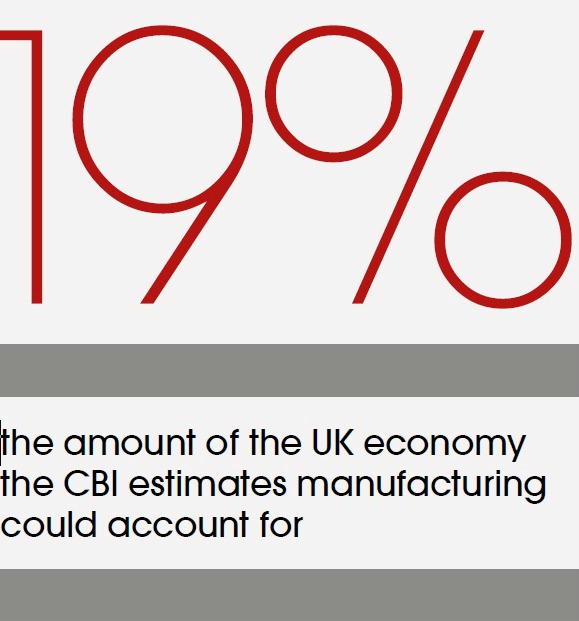 The demand for highly-qualified people in manufacturing, both graduates and technicians, is beyond doubt: by 2020, 800,000 additional workers will be needed in manufacturing.

But the supply is not there: only 25% of engineering and technology graduates work in manufacturing six months after graduation.

Young people tend to have a negative perception of manufacturing, with 67% of young women aged 7-11 years indicating that they would not like a job in manufacturing compared with 44% of young men.

The growth in apprenticeships, as well as in the number of students taking engineering degrees is welcome. Companies like those in the Tata group are investing as never before in STEM. But the message is not being heard loudly and clearly enough in schools or homes around the country.

As technological change transforms manufacturing, the opportunity exists for the UK to be at the centre of making things better, cheaper and greener. But we need the people to do it, and they need the support and encouragement to make the choice.

David Landsman is providing the keynote at The Manufacturer’s Annual leaders Conference (TMALC) in Birmingham on November 26 2015.

Without that, the technology will all be there, but the jobs and business will be elsewhere than in the UK. And it needn’t be like that.

I’m a linguist, not an engineer, so it’s no surprise that I think words matter. To the readers of this publication the words “manufacturing” and “engineer” have only positive connotations.

But let’s remember that today’s story is very different – and in many ways far more exciting – than many people outside our industry think when they hear these words.

Maybe we – working with Government and wider society – need to get smarter at telling our story, to make sure it stays our story.