The share of services in total UK exports is expected to hit parity with goods from 2026, up from 44% in 2016, marking the tipping point when British exports will largely become service-led, according to the Barclays Trade Index.

Despite this shift, goods exports will remain a critical part of the UK’s trading economy, with healthy growth of 46% forecast for the next decade, taking the total value of UK goods exports in 2026 to £445bn compared to £305bn today.

The UK’s fastest-growing goods export categories with a 2016 value of more than £30bn each are transport goods, with forecast growth to 2026 of 54%, and chemicals at 48%.

The UK will also remain an established player in high-value industrial products, such as turbines; propellers; engines, and valves, and the UK’s current largest export category by value − machinery and electricals – will grow in value to £81bn in a decade.

The UK Export Excellence Awards 2016 ceremony and gala dinner is being held on June 15 in Liverpool.

It will be an evening of celebration, recognising the achievements of the UK’s exporters over the past year.

If you’re one of the lucky companies to be shortlisted; if you’re keen to meet and share experiences with the UK’s leading exporting and manufacturing companies; or if you’re keen to catch up with old friends and acquaintances from across the market, you are invited to secure a table at this prestigious black-tie ceremony before capacity is reached.

However, the report expects this sector’s growth will be weaker than for some other goods categories, partly due to a more subdued outlook for machinery and equipment investment spending in most advanced economies.

Head of Manufacturing, Transport and Logistics at Barclays, Mike Rigby commented: “Within the goods sector, the transport industry is expected to set the pace in terms of growth over the next decade, largely driven by strong performances in the automotive and aerospace sub-sectors which we expect to continue to show solid production and export trends.

“Significant investment in technology and innovation in both industries provides a strong foundation for future growth.”

However, the expertise of UK-based manufacturers in electric vehicle and hybrid technologies means that the automotive sector remains well placed for growth over the coming decade.

Growth in aerospace sector exports will be driven by demand for more fuel-efficient, quieter aircraft and incremental upgrades to existing fleets; however, there will also be increasing competition over the next decade as domestic aerospace industries grow. 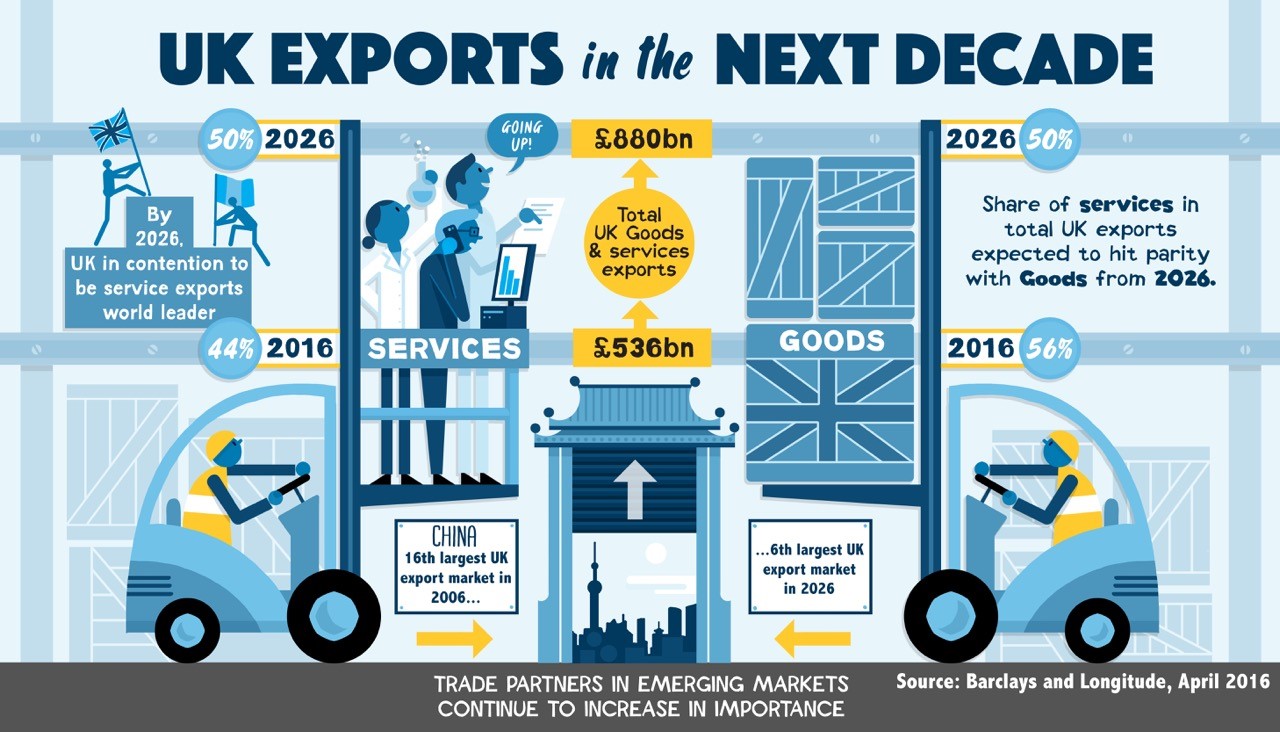 Rising per capita incomes in emerging markets and ageing populations in advanced economies will also play a part in driving the 48% predicted increase in UK chemicals sector exports, which include cosmetics and medicines.

However, the slowdown of China’s industrial sector and the end of the two-decade commodity super-cycle will result in fuels becoming the weakest-performing area of the UK export mix (4% increase in decade to 2026 compared to 46% increase in previous decade). The flagging pace of emerging-market industrialisation and the embattled steel industry will also result in fairly subdued growth in UK metals exports.

The US was the UK’s largest trade partner in 2015 and is forecast to remain the leading export destination in 2026, with Germany also retaining its second-place ranking.

The EU bloc will still account for 46% of all goods exports in 2026. However, there is still significant potential to improve the UK’s fairly modest share of exports to emerging markets, but achieving this will require a more focused export strategy from all sides than is currently the case.

Among the UK’s 30 largest trading partners, the strongest export growth in 2016-26 will be to China and while growth in the value of trade is expected to be 115% over that period, the pace of expansion will be considerably weaker than the 213% experienced over the past decade.

Furthermore, with the emergence of trading partners including India, Indonesia and Vietnam and the ongoing importance of the large BRIC markets, the potential for exporters goes far beyond the traditional trading hubs.

While the demand outlook across Europe is generally more subdued, opportunities can also be expected to emerge in some higher-growth markets, with the Baltics; Czech Republic; Bulgaria, and Romania expected to offer significant growth opportunities in the coming years.

Rigby added: “As well as the growing importance of the UK as a global services hub, the traditional UK stronghold on goods remains, particularly for industries producing higher-value, higher margin products.

“With the outlook for global growth, and UK trade, over the coming years not as clear as it has been for some time, as always there will be countries offering potential opportunities to UK exporters.

“Transatlantic trade leads the way with the US set to remain our largest individual trade partner over the next ten years with countries in the EU another key export destination for UK companies.

“Yet, there will also be increasing opportunities for trade with markets such as India and Indonesia, both of which are large markets with strong growth prospects, alongside China, a trade destination which in our Index is forecast to jump to be the UK’s sixth largest export market in 2026, from 16th in 2006.”