Chemical manufacturing is the most research-intensive industrial sector and responsible for many of the innovations we rely on in almost every aspect of our daily life. Jonny Williamson puts this vital sector under the microscope.

Surely one of the paradoxes of our time is that despite it playing a pivotal role across every sector and manufactured product, people’s awareness and appreciation of chemistry’s importance remains relatively low.

A key stumbling block may be that the companies behind finished goods often only want to discuss a product in its entirety. They don’t necessarily want to discuss the technology, the materials innovation and the scientific advancements that lie behind its final assembly.

Part of that is likely down to patent protection and wanting to maintain a competitive edge. Though our collective unwillingness to learn how something works must surely be a factor. Hand on heart, who can say they understand what goes on inside their smartphone or how a solid-state battery works. 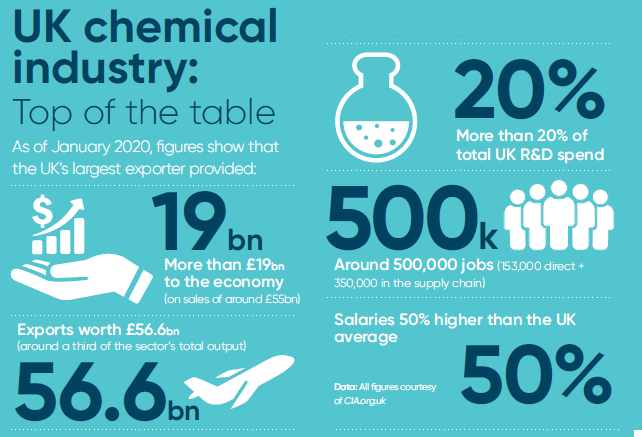 With chemistry an innovation engine for manufacturing, not to mention a growth engine for the economy, the fact that the number of students studying chemistry is in decline should concern us all.

According to the Royal Society of Chemistry (RSC), the number of UK students applying to study the subject dropped by more than 20% between 2015 and 2018, despite an increase in students sitting A-Level Chemistry.

In 2019, the RSC surveyed more than 7,000 17 and 18 year-old students from 265 schools across England and found that 31% of students pick chemistry because they’re interested in it but only 7% intend to pursue the subject or directly related courses after school. 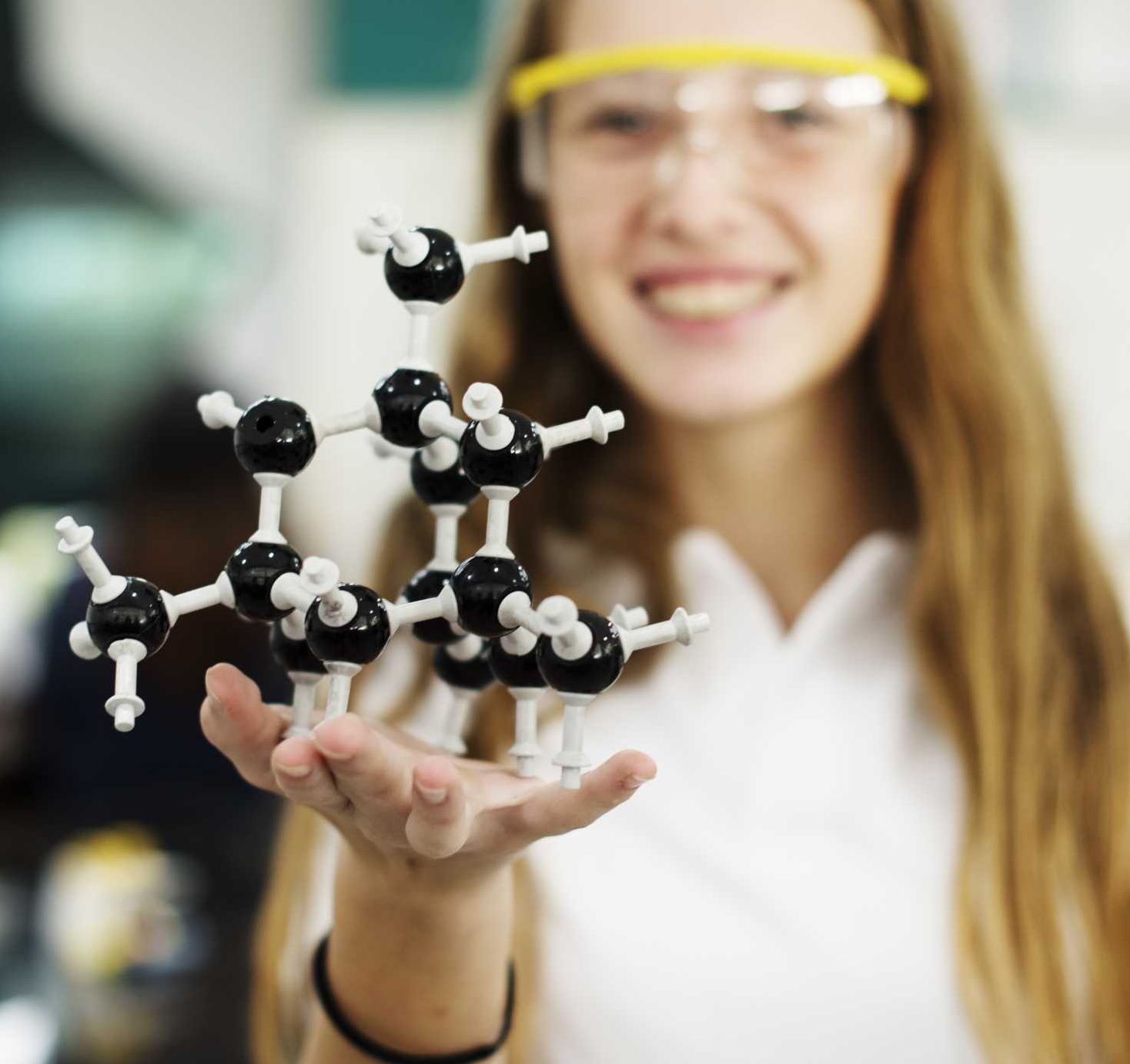 The reason for the disparity, according to Daniele Gibney, Education Policy Manager at the RSC, is a lack of understanding around “the opportunities chemistry can offer them, at a point where they’re making crucial career decisions”.

“The influx of students from other countries around the world proves young people are still interested in chemistry,” Daniele notes.

“The UK’s problem appears to be our inability to provide enough careers advice to help them make informed choices about their further education and career aspirations.”

“In an era where young people aspire to influence the world, chemistry offers the opportunity to do so in a meaningful and important way.”

Daniele is absolutely spot on. Chemistry holds the key to tackling many of the world’s most pressing challenges, from climate change and decarbonisation, to antibiotic resistance and an ageing (not to mention rapidly expanding) population.

The sector’s response to helping tackle COVID-19 is a clear example of how manufacturers are taking on global challenges and succeeding. Coronavirus has led to soaring demands for hand sanitiser with the international market forecast to reach U$1.87bn by the end 2020.

Unilever is just one of the dozens to pivot their operation to help meet demand. In April, the consumer goods giant adapted one of its deodorant manufacturing lines at its Leeds factory to produce hand sanitiser.

In just four days, the process was taken from laboratory trials to production, helped in no small part by ethanol (alcohol) – the main ingredient in hand sanitiser – already being used in some of the products manufactured at the site.

In the months since, Unilever has scaled up its production of hand sanitiser at more than 30 factories all over the world. In many cases, to meet the demand, it has been repurposing production lines which ordinarily manufacture other beauty and personal care products.

It has also set up new facilities from scratch, such as in Vietnam where a factory was built in little more than three weeks, and in South Africa where its products were previously imported.

INEOS, one of the world’s largest chemical producers, has taken a similar path. Its new hand sanitiser plant, based at the firm’s Newton Aycliffe site near Middlesbrough, was completed even more quickly – in just 10 days – and is capable of producing 1 million bottles a month.

It has since established a handful of additional production sites in Germany and France. Having now developed the infrastructure and supply mechanisms, the company has recently launched INEOS Hygienics – its inaugural consumer business manufacturing hand sanitisers, gels, sprays and disinfectants.

Beyond the immediate challenge of COVID-19, the greatest threat facing the world is climate change, and once again chemical manufacturers are at the forefront of efforts.

So called ‘Green’ or ‘Sustainable Chemistry’ has steadily grown in prominence over the past two decades as producers look to satisfy stricter legislation and more environmentally conscious buyers.

The term broadly describes the efforts of manufacturers to minimise or eliminate the use and production of hazardous substances and to develop safer, more resource-efficient molecules, materials, products and processes.

Bio-based chemicals is just one area of green chemistry that is seeing rapidly rising levels of interest. The trend is set to disrupt the global industry as more and more producers make the switch from (predominantly) petrochemicals to safer and more environmentally-friendly alternatives.

There are as many as 10 such alternatives that the Biotechnology and Biological Sciences Research Council (BBSRC) believes the UK is well-positioned to exploit.

However, doing so will require coordinating policy across the UK to ensure that environmental, health, social and economic impacts are taken into consideration.

A vision for how that can be achieved has been set out by the Chemical Industries Association (CIA), focusing on transformational co-operation, policy and regulation.

As the country’s largest manufacturing exporter, you may expect chemical businesses to be most concerned about potential tariff increases and reduced access to EU labour and sales markets from January 2021. However, the greatest apprehension lies in changes to regulation.

The UK is currently part of the Registration, Evaluation, Authorisation and Restriction of Chemicals (REACH) – the EU-wide chemicals regulation which address the production and use of chemical substances.

“Transposing REACH into UK law following the UK withdrawal from the EU represents a long standing concern for the chemical industry, with practical challenges envisaged in setting up future UK joint registrations and sharing data,” according to Nishma Patel, Policy Director at the CIA.

There is currently a proposal to introduce a phased six-year timeframe based on tonnage for the future registration of chemicals in the UK.

“While not avoiding a separate registration scheme and future replication of registrations in the UK, we believe the proposed timeline will support businesses in better managing the future registration process in the UK and minimise disruption to supply chains,” continues Nishma.

“With the newly suggested phased approach to registration, companies will be in the position to spread costs and resources over a longer period of time compared to the two years initially planned.”

Nevertheless, if it becomes more expensive to procure chemicals in the UK or more difficult to source certain chemicals, the knock-on effects could impact the entire manufacturing sector.

Investing in the future

Whatever the future may hold, the UK should be doing everything in its power to not only maintain its position as a global chemicals and innovation leader, but to build on it.

Society faces numerous challenges, but each one also represents significant growth opportunities for those who develop the products, technologies and materials that help address them.

The bio-based chemicals market, for example, is expected to achieve a double-digital CAGR over the next five years to reach almost US$100bn.

The situation is therefore clear; the UK must prioritise this vital sector and create a stable trading and policy framework, one that offers improved incentives for R&D and sustainability initiatives.

If not, the UK risks not only missing out on the lucrative rewards brought about by breakthrough innovations, but also being left behind as the demand for traditional chemicals reduces.