Food and drink is by far the biggest sector in UK manufacturing. From small local producers to global brands, the country has a brilliant track record as an innovator, exporter and world-beater in products from Scotch whisky to chocolate and cheese.

The sector faces much the same challenges as other parts of UK manufacturing, plus some of its own. Nick Peters reports.

Growing crops, raising animals and turning them into food is one of the oldest industries known to man. Little wonder it dominates the manufacturing sector, because food – together with drink – constitute the one product that every single person in the land consumes.

Not everyone needs a new car, but they do have to eat!

Unfortunately, the UK does not produce enough of its own raw materials to supply the food manufacturers; so, while we export a healthy £22bn worth of manufactured food and drink, we import about twice that amount, particularly in fresh fruit and vegetables.

The only sector where we have a trade surplus with the rest of the world is drink, thanks to the booming trade in Scotch whisky.

And there is much room for improvement in our export picture, as a study by Grant Thornton for the Food and Drink Federation discovered:

“Food and drink exports are a UK success story and a sign of how highly UK products are thought of overseas, but just one in five food and drink manufacturers currently export. The UK has 2.2% of the global food and drink export market, but that share is considerably behind international rivals such as France (4.7%) and Germany (5.6%).

“Currently, more than half of the UK’s exports head to EU nations, and the EEA remains the UK’s most important export market, but many of those manufacturers surveyed are already identifying new markets.

Manufacturers highlighted China, India and the UAE as the top three untapped markets they’re looking to prioritise based on their scale.”

Behind that study lies the obvious issue of Brexit and the impact that will have (or may have, given the current lack of clarity about what happens in March 2019) on the industry’s heavy reliance on migrant labour.

If free movement is stopped in its tracks, it will send a shockwave through the sector, according to FDF chief executive, Ian Wright.

Factor in other issues the food and drink industry has to contend with on a daily basis, including social and health policy areas such as obesity and alcohol consumption, and it is clear that this dominant part of the UK manufacturing sector is fighting a number of battles on a wide variety of fronts.

For the sake of all our dining tables, we wish them every success in confronting them. 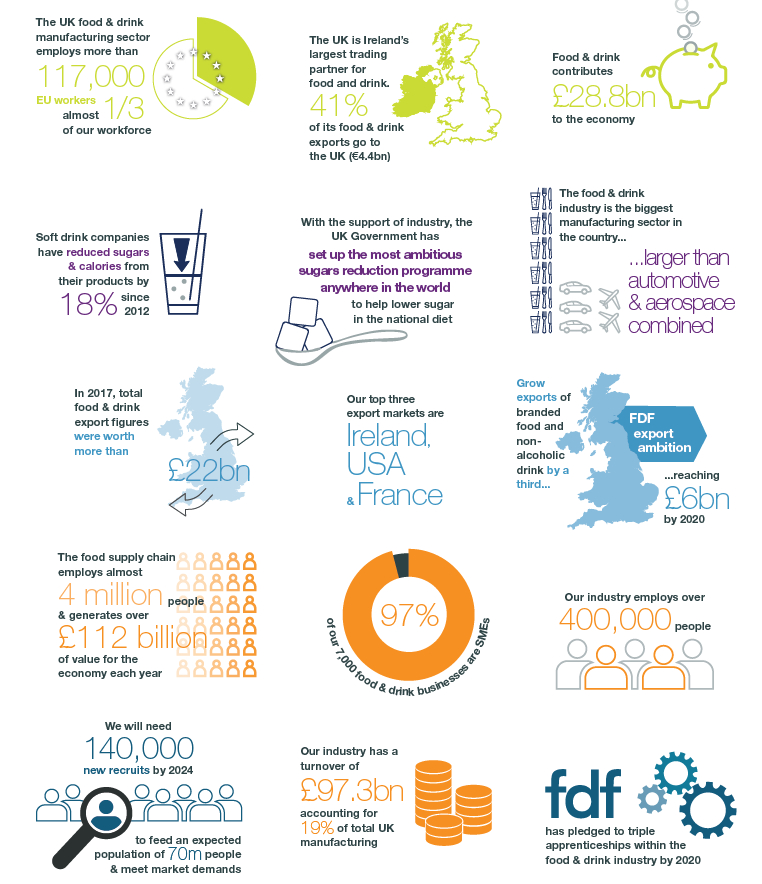