Posted on 4 Jun 2018 by Jonny Williamson

Britain’s manufacturing sector has shrunk in the past decade by almost 600,000 jobs to leave fewer than 3 million workers employed in the sector, whereas the Index of Production has increased at the same time.

Between them the lost jobs have meant that £2.3bn less has been paid in manufacturing wages in real-terms.

The report states, that every region in the UK has experienced a decline in manufacturing employment.

The GMB’s Making It campaign is calling on the government in invest in manufacturing and protect manufacturing jobs during Brexit.

Jude Brimble, GMB national secretary for Manufacturing, said: “We are at a critical crossroads in UK manufacturing. The right support for our manufacturing sector would accelerate growth, address the skills gap and provide much provide a much-needed boost to technology, production and exports.

“A robust manufacturing base post-Brexit is vital for the UK economy, workers and local communities. The continuing decline in jobs is a result in this government’s failure to deliver the certainty the industry needs.

“It begs the question; how does this add up to May’s commitments that ‘the UK’s post-Brexit arrangements must protect people’s jobs and security’?

“This is why GMB Union’s Making It campaign calls for a rethink on government procurement,  investment for skills and jobs across manufacturing and for a Brexit deal that delivers for workers.”

Index of Production and digital tech

However, a decline in employment does not necessarily mean a decline in productivity, the output in the UK industry increased from November 2008 to March 2018.

The graph, issued by the Office for National Statistics (ONS), shows that the economic downturn in November 2008 was followed by a broadly upward trend from 97.6 points up to 105.1 in March 2018 which is the highest index since March 2008. 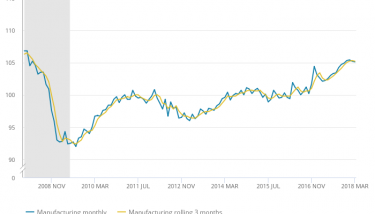 According to the ONS, renewable energy projects, boats, aeroplanes and cars for export helped that the UK manufacturing output expanded at its fastest rate since early 2008.

Another factor that has contributed to a productivity boost is the increasing amount of new technologies which have been implemented since 2008.

“Embracing the revolution will also create a variety of new jobs that previously didn’t exist, such as IoT solution architect or computer programmer.

“These sorts of roles will be the replacement for manual roles going forward – they must be, as automation and digitisation will lead to more creative jobs that stimulate innovation and growth.

“But, to deploy these new technologies in an effective way, it’s imperative for businesses to build a talent framework that develops skills in emerging areas, as well as retain traditional capabilities. People remain just as important as ever before.

“If manufacturers can create an appealing place to work by implementing modern working strategies and building a strong brand value, new talent will join, and current talent will remain.”