What is UK manufacturing going to face in 2015?

Posted on 13 Feb 2015 by Victoria Fitzgerald

The Manufacturer casts its eye over EEF's annual Executive Survey and charts the road both behind and ahead for the nation's industry.

EEF kicked off 2015 with the release of its fourth annual Executive Survey in collaboration with Aldermore.

The report examined 2014 and the year ahead, drawing on popular opinions from UK manufacturers. Unfortunately, the findings were rather pessimistic. Traditionally, the bleakness of January is brightened by aspirations of fresh starts, new beginnings and hope for what could be in the forthcoming year. But, on the contrary, early 2015 headlines were dominated by news of manufacturing hitting a three month low. 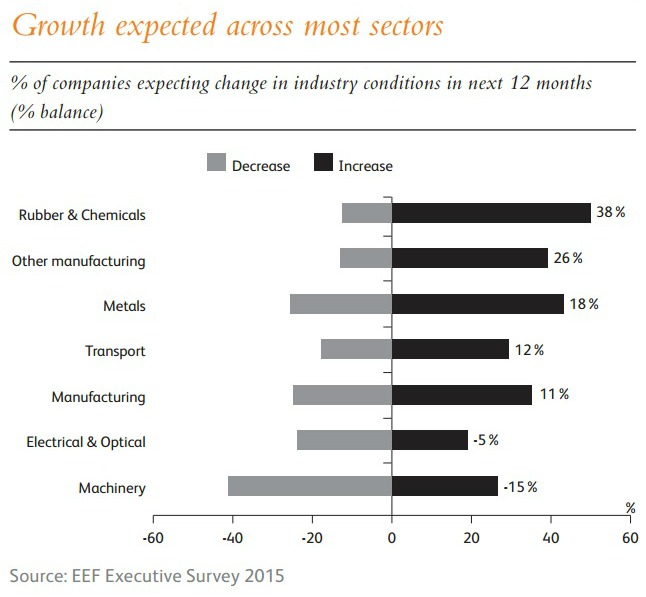 EEF itself referred to the findings as a ‘sober start to 2015’, due to news of manufacturers’ expectations of an improvement in economic conditions falling from 70% in 2014 to 37% this year, with 17% expecting them to deteriorate, a 5% increase on last year’s results.

Additionally, 38% reportedly do not hold much confidence for the global outlook, compared with 33% last year. However, let’s not confuse pessimism with realism. At the beginning of 2013, industry reps expected a modest pickup and they were right, in 2014 the manufacturing sector was expected to be brighter than 2013, and it was, with an increase in profitability and employee numbers.

Improvements from the previous year were bolstered in 2014 with the UK economy expanding at a good pace throughout the year and manufacturing set to achieve its strongest growth since 2010. 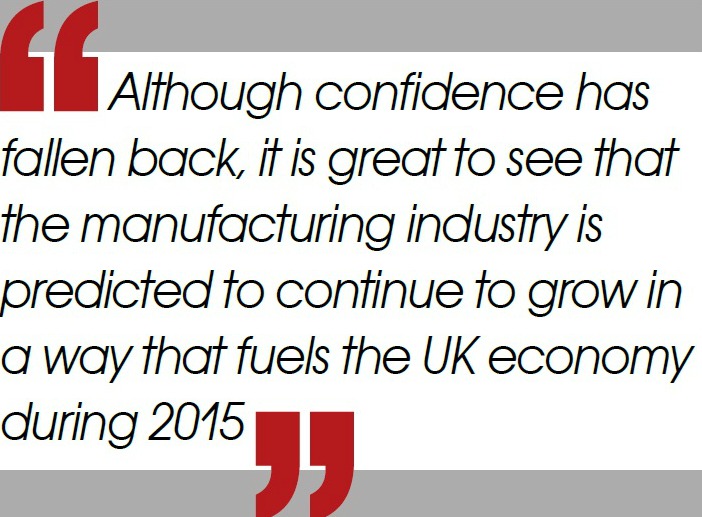 Emerging from a recession, manufacturers are reluctant to forget the difficult times that were a reality just a few years ago by taking growth for granted. There is reason for optimism but never a reason to rest on one’s laurels. While there are differences compared to the figures from the 2014 survey, respondents remain more positive on the UK’s economic outlook going into 2015 than in 2012 or 2013.

Seven in 10 manufacturers (70%) say the UK will be a competitive location, reinforced by confidence in the increase in staff numbers, sales, margins and productivity. Almost seven in 10 (69%) expect to improve productivity, while 58% expect to boost UK sales. Just under half (49%) expect to be taking on more permanent staff.

Additionally, export sales look positive, with just under half of manufacturers (49%) expecting to see an increase in 2015, while three in ten (30%) expect sales to remain steady. The hotspots for export growth are expected to be North America, Asia and South America while, in line with ongoing economic and geo-political uncertainty, manufacturers see Europe and the Middle East as ‘not spots’.

Mark Stephens, deputy CEO and group commercial director at Aldermore is also seeing the silver lining in the 2015 outlook, highlighting the potential in innovation and exports. He says: “Although confidence has fallen back, it is great to see that the manufacturing industry is predicted to continue to grow in a way that fuels the UK economy during 2015. 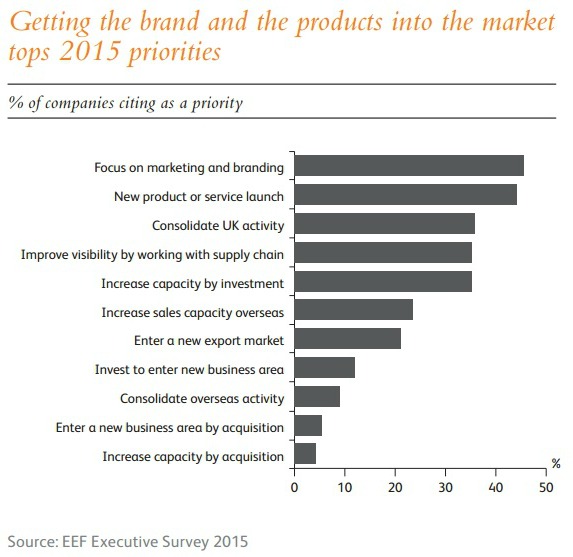 “At Aldermore we’re seeing ever increasing demand from all sorts of innovative UK manufacturing firms needing to free up cash-flow to expand their business and take on new contracts.

“We are also seeing an increasing number of our customers making real inroads in the export market selling their produce across the globe. So the prospects for the manufacturing sector are still looking very strong going into 2015.”

While there is much to celebrate, there are potential obstacles manufacturers will have to navigate. Economic concerns regarding major markets continue to dominate the worries of many. Substantial downward revisions in the Eurozone and territories further afield are reflected in the International Monetary Fund’s global growth forecasts for the year ahead.

The eurozone is engaged in a long-term battle with deflation and low-to negative growth, Japan is combatting a looming recession and rising levels of debt in China was signaling a significant deceleration in growth rates in the second half of last year, as well as, fiscal difficulties in Brazil and a Russian economy hampered by Ukraine-related sanctions.

In essence UK manufacturers will dodge the major impact of such troubles but are still wary of the potential indirect fall-outs. Significant movements in exchange rates also continue to be a substantial concern, due to a variety of factors, including non-wage employment costs, auto-enrolment costs and possible payments from holiday pay changes.

Additionally, volatility in exchange rates continue to be a source of risk for companies in connection with import and exports, as well as, upward pressure on pay still expected. Solid growth is urging employers to raise salaries to retain skilled workers, maintain a productive and flexible workforce, while simultaneously achieving a firm’s strategic goals.

Although the sector is not without its risks, manufacturing is positioned advantageously to achieve growth in the coming year.

Batting off recent signs of a slowdown, in data published by the British Chambers of Commerce, the manufacturing sector recorded increases in several areas in the second half of last year:

John Longworth, director general, British Chambers of Commerce, was confident that the recent data was an excellent starting point for UK manufacturing, saying: “British businesses are well placed to grow in 2015 – a testament to their hard-work and resilience.

“It is particularly pleasing to see the manufacturing sector bounce back, despite signs of a slowdown in recent months. However we must aim for growth that is sustainable for the long-term, rather than settle for second best.

“With employment and investment intentions at historically high levels… it is now vitally important that firms are able to convert their growth ambitions into reality.

“Strengthening our business finance system, which constrains the growth aspirations of too many firms, will remain a decisive factor in securing a sustainable recovery. Low interest rates and reduced regulation will also go a long way to creating an environment that encourages enterprise and wealth creation.”