Factory orders in the UK fell during the month of April but the outlook for the next three months remains positive, according to the latest Confederation of British Industry’s Industrial Trends Survey.

The CBI report showed the total order book balance dipped by -1 from last month’s +6, falling below the expected +7 predicted by analysts but above -16, the long run average score.

Conversely, the survey measured total order volume for the next three months as being +32, rising from +19 and marking the highest score since September 2013. 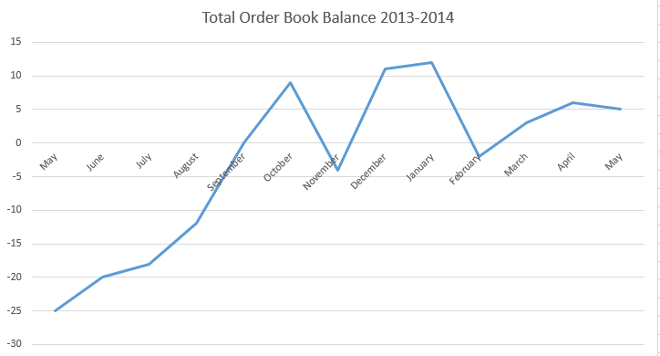 In further positive news for UK manufacturing, total new orders showed their strongest increase since April 1995, with business optimism at its highest since April 1973.

Businesses also anticipate the biggest increase in production over the next three months since July 1976.

Katja Hall, CBI chief policy director, believes the long term picture of UK manufacturing is one of confidence and optimism.

“Confidence is rapidly rising among British manufacturers, with a real sense of business optimism,” she said.

“Our industrial base is seizing a bigger role in the UK’s economic recovery, with output, orders and hiring all on the up.”