Posted on 8 Jun 2015 by The Manufacturer

The dust has barely settled after the election and the new cabinet has been unveiled. David Cameron has moved quickly to line up the team that will help him deliver on the pledges that won such a turnaround in public support.

Given the task ahead it is perhaps unsurprising that he has opted for stability and continuity, with a number of cabinet heavyweights staying in their pre-election roles.

This move chimes with the current mood music of “if it ain’t broke, don’t try to fix it”, and that will sit well with business leaders and many of the electorate who clearly want the Government to carry on with the vital job of rebalancing the economy.

There are a couple of noticeable new additions however, and all eyes in the business community will now be on the new Business, Innovation and Skills Secretary, Sajid Javid.

He is taking on this critical brief at a pivotal time for the economy and industry. Business wants and needs stability and continuity in policy, and the Government’s commitment to a long-term economic plan and business strategy remains key.

Business will be looking for a smooth transition, with Javid seamlessly taking up the reins from Vince Cable, who proved popular with business chiefs for his passion and commitment to industry. This is not the time for grand gestures or turning aside from a plan and policies that are understood, supported and bearing fruit.

The new Business, Innovation and Skills Secretary will need to focus on three things in particular:

In the eyes of the business community, however, Europe will provide the real test of Javid’s mettle. The new Secretary of State will play an important role in any EU negotiations and in the forthcoming referendum. The vast majority of businesses he will now represent in Government want Britain to remain at the heart of a reformed Europe and will expect him to champion their views.

The role of Business Secretary is always pivotal, but today perhaps even more so. Britain’s manufacturers are bracing themselves for the imminent impact of a 4th industrial revolution, driven by rapid advances in technology. 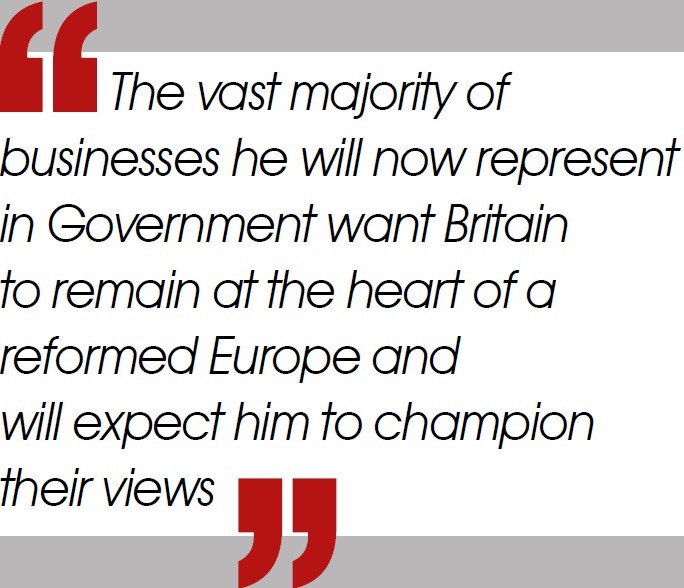 They want the UK to take a leading role, knowing full well that this could be a game-changer in terms of strengthening and re-balancing our economy and providing high quality, well-paid jobs for the future.

At the same time, they warn that Britain faces the very real danger of being left behind – potentially crippling our industrial renaissance and condemning the UK economy to remaining dangerously out of kilter.

They are realistic about Britain’s current capabilities and about the need for Government, industry and academia to work together to secure the UK’s role at the forefront of this next industrial wave.

Simply carrying on as we have before is not going to be enough – we must start tackling big issues, such as ensuring our workforce is suitably skilled and equipped for Industry 4.0, in a more coherent and strategic way.

If manufacturing is going to deliver then it needs access to a skilled, productive and flexible work force, improved infrastructure, a reduction in the cost of doing business and better support for growth. Having a solid, consistent and sustainable industrial strategy is going to be the linchpin.

There is also strong support among the electorate – 85% want to see the Government promote a stronger UK manufacturing base, believing it will deliver more jobs, economic growth and prosperity.

With the right industrial strategy in place, pulling industry and Government together, there will be little reason for these worthwhile ambitions to go disappointed. In short, the real work starts now – we offer our support and we wish Javid well.