Britain’s manufacturing renaissance has continued, with the announcement that Britain is now the eighth largest manufacturer by output in the world – less than a year after it climbed to ninth. 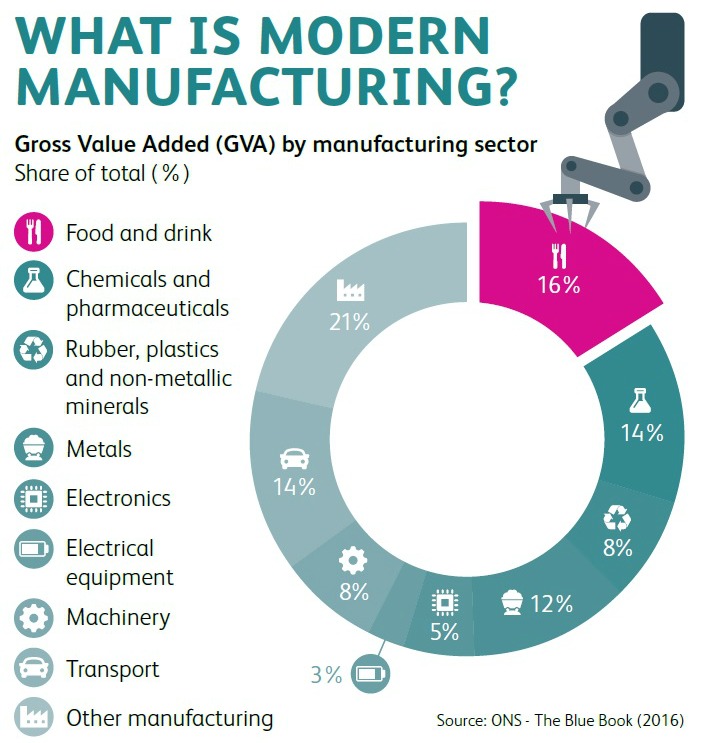 New data shows that Britain is now the eight largest industrial nation with an annual output worth $249bn, according to the latest facts and figures published by EEF and Santander.

In the post-Brexit world, manufacturing will increasingly provide Britain’s link to the world, currently generating 44% of total UK exports.

The sector is also vital for the nation’s future source of income, undertaking some 70% of total R&D by Britain’s businesses.

Data around employment is equally impressive, with 2.6 million people working within UK manufacturing.

The largest individual sector is food and drink (16%), while the chemicals and pharmaceuticals and transport sectors both account for 14% of output each.

It is these two sectors which also head up the manufacturing innovation league table, with ONS figures revealing that pharmaceuticals accounts for 34.4% of UK innovation, and transport 33%.

Manufacturing is spread across the country – the North West remaining the biggest regional powerhouse, producing more than £24bn output.

Manufacturing also helps power the engine of the West Midlands (£17.5bn) and East Midlands (£15.9bn), with their strength across the aerospace and automotive sectors.

A reminder of the post-Brexit challenge is ever present as EU markets still dominate for exports, accounting for 48% of manufactured exports in Q2 2017. The UK’s largest single export destination is the US, followed by Germany and France.

Chief economist of EEF, Lee Hopley explained: “With government facing lots of major policy decisions on everything from our future trading relationship with Europe and the rest of the world to the detail of a long-term Industrial Strategy, it is vital that they have the right industry facts at their fingertips.”

Head of manufacturing at Santander Corporate & Commercial, Paul Brooks commented: “Manufacturing remains a key part of the UK economy and it is really encouraging to see that the UK is now the eighth largest manufacturer by output in the world, and that the majority of UK adults believe we should be aiming to be in the top five.”

Santander is the headline sponsor of The Manufacturer MX Awards 2017 – the year’s largest celebration of UK manufacturing.

The ceremony and gala dinner on 16 November in Liverpool is the culmination of a year-long entry and judging process, where more than 1,000 industry leaders will gather to network and reflect on the success of British manufacturing. (See the shortlist here)

The awards ceremony is co-located with The Manufacturer Live series of events across 15-16 November. For more details on the ceremony and to book your tickets, please visit: www.themanufacturermxawards.com