The Singapore site will be the first international on-demand 3D printing factory. UPS plans to open the facility with its partner service bureau, Fast Radius, by the end of the year.

The opening of the groundbreaking facility will expand the UPS on-demand 3D printing network to Asia and enabling customers to increase their supply chain efficiency with additive manufacturing. 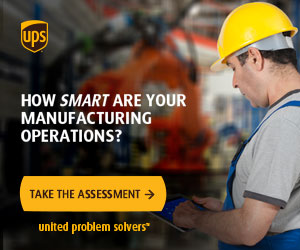 UPS is a major company which has adapted to 21st century business practices by readily embracing the concept of 3D printing.

The US logistics company started offering 3D printing services in several of its US stores in 2014, and earlier this year teamed with supply chain company SAP to implement a widespread, on-demand, end-to-end 3D printing solution.

UPS is a global leader in logistics that offers a broad range of solutions across the more than 220 countries and territories worldwide.

The company which has promoted themselves under the tagline ‘United Problem Solvers’ have been doing just that when it comes to the concept of 3D printing, with UPS setting up an automated industrial 3D printing factory in May near its WorldPort air hub located in Louisville, Kentucky.

Its latest endeavour to expand its on-demand 3D printing network to Asia through the opening of a 3D printing factory in Singapore.

UPS joining with partner Fast Radius to expand its 3D printing service into Asia is an agreement which president of UPS Asia Pacific region Ross McCullough said would lead to 3D printing technology having a major impact on the world of 21st century manufacturing.

“3D printing will have a significant impact on industrial manufacturing and 21st Century supply chains,” he said.

“At UPS, we are embracing disruptive technologies and integrating them into out global logistics network,

“We believe that much like ecommerce digitized and transformed retail, 3D printing will have a similar impact on manufacturing,

To achieve this ambition of servicing Asia’s demand for 3D printing manufacturing and logistics, UPS will add also establish an Advanced Solutions team in Asia to create a 3D printing Centre of Excellence that develops supply chain solutions and promotes wider applicability of 3D printing with customers.

The Fast Radius On Demand Production Platform, which is expected to be operational by the end of the year, will allow customers to order industrial 3D printed parts for expedited delivery.

The 3D printing factory proposed to open in Singapore will help to benefit companies that virtualise their inventories by not only saving costs by reducing the number of parts made ‘just-in-case’ but also can produce smaller quantities cost effectively and with the same quality. This is in addition to minimising lead-times because parts are produced closer to where they are needed.

The establishment of the first international on-demand 3D printing factory is a pivotal move by UPS, as customers of all sizes can use the on-demand network for a variety benefits; including manufacturers who want to reduce inventory for slow-moving parts, and those with short production runs, where the cost to create the mould or tooling could make these orders too expensive for traditional manufacturing.

It is also seen as likely to benefit manufacturers and retailers of custom/semi-custom goods who can utilise additive manufacturing to allow cost-effective customization of goods.