US tariffs on Airbus will “damage” aviation industry

The Trump Administration has been authorised to impose import duties on Airbus that the airline’s chief executive warned will “disrupt” industry and raise costs.

Airbus boss, Guillaume Faury, said he feared the “serious damage” awaiting the aviation sector after the World Trade Organisation (WTO) gave the US a green light to put a 10% tax on EU aircraft imports from 18 October.

The move is the latest chapter in a long-running dispute between the US and the EU over illegal subsidies for plane manufacturers Airbus and itsAmerican-owned rival Boeing.

The US is authorised to impose tariffs of $7.5bn (£6.1bn) on a range of goods imported from France, Germany, Spain and the UK, that it claims it can arbitrarily increase and change “at any time”.

The European Commission has threatened to retaliate in kind, signalling an ensuing tit-for-tat trade war that could harm industry on both sides.

A WTO ruling on what tariffs the EU can impose in retaliation for US state aid given to Boeing is expected next year. 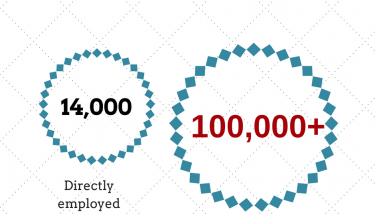 Airbus chief exec, Faury, whose company directly employs 14,000 people over 25 sites in the UK, said he is “hopeful” the US and the EU can agree a solution that will not cause a detriment to the aviation business.

“It is in the interest of the whole global aerospace industry that a negotiated solution is found to this dispute, removing the threat of tariffs,” he said.

“This is a sector where low tariffs have helped manufacturers deliver safe, advanced and increasingly fuel-efficient aircraft to our customers around the world.

“We urge the EU and US authorities to work together to find a mutually beneficial solution that sustains open and competitive markets.”

The US first filed a lawsuit in 2004, alleging cheap European loans for Airbus were tantamount to illegal state subsidies.

The WTO ruled in favour of the US, which then went after the EU and other member states for not being in compliance with the ruling.

The US initially wanted to impose taxes of $11bn on imported EU goods. Despite missing the mark, it is understood the WTO’s readjusted figure of $7.5bn is the largest penalty in the organisation’s history.

US trade officials said EU subsidies to Airbus have “seriously injured” the US aerospace industry.

The UK has called for a resolution that avoids implementation of the new tax.