Posted on 1 Sep 2016 by The Manufacturer

Before the referendum vote, Rolls-Royce plc Chief Executive Warren East was uncompromising on the dangers of voting Leave. In a wide-ranging interview with Editor-at-Large Nick Peters, he now sets out his equally uncompromising post-Brexit terms of trade with the UK government, and tells companies in the RR supply chain to modernise, or risk being left behind.

Warren East couches his words carefully and pleasantly, but his message is plain and quite stark. Rolls-Royce plc is of strategic importance to this country and unless the government understands that, then as a global company with half of its workforce and three-quarters of its business outside the UK, a change in its priorities could quite easily take place.

The quietly-spoken East has a habit of making bold statements. Pre-referendum in June, he sent a very public shot across the electorate’s bows by warning that if they voted Leave, Rolls-Royce could shelve some of its UK investments. He also advised his workforce to vote Remain.

Clearly, in terms of numbers at least, East was on the wrong side of that argument, but he doesn’t regret making it. “The concern I publicly raised ahead of the vote was uncertainty,” he said. 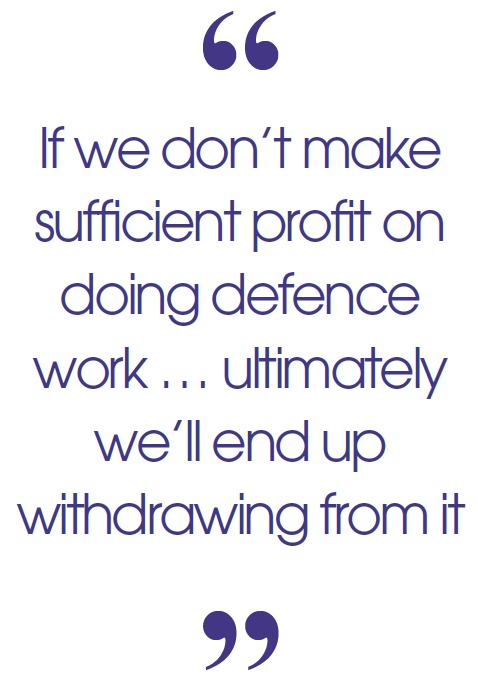 “Rolls-Royce, which has employees, a supply chain and a major business partner [Airbus] scattered between the UK and the EU, has been used to free movement of people and goods. Now we do not know exactly the nature of the constraints we may or may not suffer.

“It’s uncertainty that causes some delay, some pause. Our key competitors, both of whom are in the US [GE and Pratt & Whitney], don’t suffer from that. It’s like running a race where every lap you run they have a ten-yard start.”

And in there you can detect some of the impatience East feels about having to run a global business, making huge investments that are risky and sensitive to future shock, in a country where everything that had once been taken for granted has now been turned on its head.

Rolls-Royce is as anxious as anyone to see what the promised ‘proper’ industrial strategy Theresa May spoke of in her leadership election speech looks like. There can be no doubting it will be more interventionist, but from Warren East’s point of view the new PM’s fine words must be backed by hard cash.

“Two thirds of our business is aerospace,” he said. “It involves long periods of investment followed by long periods of payback on those investments. They are quite high risk investments and they employ a great deal of people, so it is good business for government to encourage, because it generates lots of jobs and eventually taxes. We do benefit from government help, but it needs to be consistent and long term.”

For every £1 the government invests, Rolls-Royce invests £17, but he says that support is significant, necessary and it must continue. And he makes it very clear that Rolls-Royce is a global business, not just a British one, and if he as chief exec sees conditions change, well, there are other partners out there.

“We are very pleased with what the government has done over the last several years,” East said, “but this isn’t a begging bowl exercise. We have a massive list of things we can do. The government money is very useful, but there are governments around the world that are very keen to support us.

“Half our staff are in the UK and we are a UK headquartered company, but I have to remember the other half of the staff that are not in the UK, and the fact that for the next 10 years three-quarters of our business is outside the UK. If there are governments elsewhere that are able to help us get a better result, then we have to pay some attention to that.”

Relations between Rolls-Royce and the government took a bit of a nosedive in May when the newly-established Single Source Regulations Office (SSRO) very publicly stripped £1.27m out of a £70m contract for Rolls-Royce to supply engine support for the Hawk aircraft used for RAF training and by the Red Arrows.

The SSRO said Rolls-Royce had overstated some of the risk it had priced into the contract and had charged too much for marketing. It warned more reductions were under consideration.

When I asked Warren East if it made him nervous for the future of the defence division to have the government poring over contracts with this amount of precision and cost-cutting intent, he laughed, before once again veiling a quiet threat in soothing language.

“There’s always a reason to be nervous,” he said. “I’m a great believer in the saying ‘Only the paranoid will survive’. And as a taxpayer I’m pleased to see the government taking care of how public money is spent. Actually as Rolls-Royce I’m pleased to see it because I want to see more of it going to the Aerospace Growth Partnership (AGP), and not being siphoned off into super-profits for a company that happens to be successful in securing all the business.”

So far, so good, but then he took his swipe back at the government, hinting very strongly that it is entirely feasible for Rolls-Royce to reduce its key role in defending the UK if the government plays too much hardball over budgets.

“We need to get a bit smarter and not use a sledgehammer to crack nuts. Undoubtedly in the past we have not paid much attention to the other side when it came to pricing, leaving it up to them to drive the price down.

Similarly, an over-correction (the other way) is bad for our business. If we don’t make sufficient profit on doing defence work then we are not going to invest in the skills necessary to deliver a good solution, and ultimately we’ll end up withdrawing from it. From a national point of view, you’d have to question whether we want our defence industry to wither on the vine. That’s not a good idea.”

His case was somewhat made for him by The Times newspaper on the morning that we met, with a front page splash that Russia’s military now significantly outguns the UK, thanks to a starkly different attitude to defence budgets in Russia, compared with the steady stripping out of defence costs under the Coalition and Conservative governments.

“You can’t get something for nothing,” East continued. “If people want really good engines in aeroplanes used in defence, then we have to put the R&D in to deliver that.”

Hearing the chief executive of Rolls-Royce drop strong hints that the company could rebalance its business focus outside the UK is enough to send shivers all the way down the UK aerospace supply chain.

Those same companies were also given a warning in the recent strategy document Means of Ascent from the Aerospace Growth Partnership, of which Rolls Royce is a prominent partner.

The AGP all but accused supply chain companies of complacency. Despite the very positive tone of the document, outlining successful initiatives such as its government-supported ‘Supply Chains for the 21st Century’, which pushes R&D funding and support down the supply chain, the AGP also revealed the results of a survey it commissioned last year from Ricardo Engineering into the health of the aerospace supply chain.

They were not encouraging. It revealed:

It is the last two items that suggest smaller companies are not doing anything like as well as they think they are, or as well their larger prime customers want them to. Warren East warns that those that fail to heed this will lose out.

“The reality is that when you get a new wave of technology that we can loosely bucket as Industry 4.0, there’s a heck of a lot of investment required, and some smaller companies just cannot afford that step for some time,” he said.

“There will be new entrants that are able to embrace that change, and the ones who are unable to do so will probably suffer, because actually that technology does pay off, it does make for a more competitive operation, and the people further up the value chain will seek out the most competitive suppliers. So those who invest, and embrace a means to achieve a more competitive output will be the favoured ones. That’s how the market works.”

As the Ricardo survey for the AGP demonstrated, and as everyone knows, there is a skills gap in the aerospace industry, as there is throughout manufacturing, thanks to decisions made decades ago about the value of apprenticeships.

For some time now, the government has been scrambling to remedy that with heavy promotion of apprenticeships to young people, but that initiative has suffered from the emphasis placed by previous governments, notably the Blair government of 1997, on pushing young people into university education.

The effect is that young people today still believe a degree will be of more use to them than an apprenticeship, and as a result starving the country of a properly-trained workforce.

For Rolls-Royce, this has never been a problem. Quite apart from having maintained its own apprenticeship programme, it is inevitable that along with companies like BAE it will attract the very best.

Warren East is understandably a fan, and as well as calling for a greater emphasis on the teaching of STEM subjects in schools and support for apprenticeship programmes as part of the new government’s industrial strategy, he also recognises the need for the supply chain to benefit, and says Rolls- Royce is doing its bit to help.

“I look at someone doing a degree apprenticeship with us,” he said. “They work on real stuff, they don’t get to build up a graduate loan, they get their salary instead. And after they’re finished, they get a degree, training and a job. It’s win-win-win all round! It’s great, because we get a supply of the people with the right skills to pull off the sort of products and engineering feats we pull off.

However, we are able to train more apprentices than we need, so they go off into the supply chain, which I think is quite an intelligent use of our money because it means our suppliers have appropriately skilled people so they can continue to be sustainable suppliers for us.”

The path to growth

The feistiness of Warren East’s approach to issues such as government support comes not from a sense of worry about the future but from the tremendous confidence he transmits about the company’s prospects.

Following his stellar helming of ARM to become a company that the Japanese were willing to pay £24.7bn for earlier in the summer, he was brought into Rolls-Royce to turn it into a business fit for 21st century purpose. 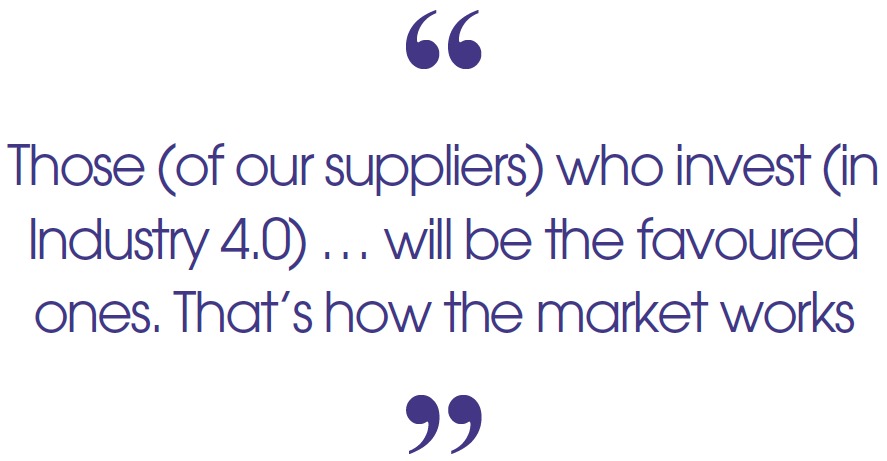 Although it has been a difficult restructuring – or ‘modernising’ as he prefers to call it – complete with profit warnings and an unexpected post-Brexit £2bn write-off from its currency hedge fund, the results of his work to date have been good and the share price is reflecting that.

East says there are good signs for the future, particularly with the steady growth projected in the commercial passenger business. There is also the government competition to build SMRs, the small-scale nuclear reactors to be used for localised energy supplies.

Rolls-Royce is one of 30 companies bidding for the contract, but he is confident that their experience with nuclear reactors puts them in a very strong position to win. That opens the door to a whole new future business stream, he believes, that will eventually lead to opportunities for private investment in nuclear power generation.

Now, like the rest of industry, Warren East waits to see what the government unveils in terms of industrial strategy this autumn. As far as Rolls- Royce is concerned, the line in the sand has been drawn.