What does the £20bn Austalian BAE Systems deal mean for UK exports?

British defence giant, BAE Systems has secured a £20bn contract to build new warships for the Australian government. The Manufacturer explores what affect this might have on UK exports?

The Australian government has selected the Royal Navy’s Type 26 Anti-Submarine Warfare Frigate design for its SEA5000 programme. Nine of the ships will be built by BAE Systems in a deal reportedly worth £19.6bn (US$25.7bn / AUS$35bn).

Australia’s Finance Minister, Mathias Cormann described the warships as “one of the world’s most advanced anti-submarine frigates”, and the multi-billion-pound deal proves an important achievement for British military exports.

BAE Systems – which is described as the UK’s largest manufacturing employer and employer of professional engineers – pipped its European rivals to gain the contract.

This latest deal comes after BAE Systems secured a £150m contract with the US Marine Corps , to build its latest fleet of all-terrain vehicles which aim to improve combat transport services for the marines.

What does this mean for UK exports?

The deal will see Australia become better tied to Britain, and could help strengthen’s the country’s position for future trade deals post-Brexit.

However, the Frigates will not be manufactured in Britain but in Adelaide (South Australia), a decision that could create and sustain upwards of 5,000 jobs and significantly boost the Australian  economy.

Nevertheless, Prime Minister Theresa May described the deal as an “enormous boost” for Britain’s economy and reflected the government’s initiative to “build on our close relationships with allies like Australia” as the country gets ready to leave the European Union next March.

This partnership will come as a major incentive for UK businesses and manufacturers, as they seek to secure new export deals ahead of Brexit; this could prove vital for future success.

Commenting on the news, Stephen Phipson, chief executive of EEF, said: “This win for BAE Systems and the UK Defence industry is the result of years of hard work with government and industry working in close partnership.”

He continued: “The decision by the Australian government confirms the UK leadership in advanced Frigate design and the strengthening of ties at both the industrial and Defence level between our two nations, British expertise helping to transform the Australian shipbuilding sector.”

According to its website, BAE Systems exported £4.7bn worth of goods and services from the UK in 2016, the equivalent of 0.9% of all UK exports. The company also invested £1bn in R&D in 2016 alone.

What this might signify is that BAE Systems could continue to utilise and access new overseas markets and create partnerships for other businesses to follow; both essential for UK companies to implement post-Brexit.

GMB believes the shipbuilding industry – which is worth almost £2bn – should diversify into defence exports and win more commercial contracts in order to continue to be a successful sector post-Brexit.

In its 2017 report,’Turning the Tide’, GMP stated: “Employers have not invested enough in equipment or research and development for decades. The lack of certainty over future defence orders is an important contributing factor.”

Could the future of shipbuilding rely on  cobots?

BAE Systems is also implementing further automation and collaborative robots (known as ‘cobots’) into its workforces. This integration could potentially improve work flow and help the company to secure future UK exports, if the production became more efficient.

Some of the key features include: 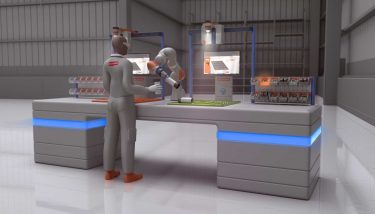 Dave Holmes, manufacturing director at BAE Systems’ Air business, said: “We’ve only really started to scratch the surface of what automation can do in industry and some really exciting possibilities are emerging as we enter the fourth industrial revolution.

“Cobotics is the next, natural step in developing manufacturing technology that will allow for a blending of skilled roles. We envisage that people will make larger, more strategic decisions while delegating the repetitive and intricate aspects of production to a robot.”