What happens when you combine world-class talent and cutting-edge technology with a deeply ingrained passion for expanding the boundaries of what’s possible?

Over the past four decades (and counting), Williams F1 has typified the drive for engineering excellence. From its in-house-developed eight-speed, seamless-shift, semi-automatic gearbox to the carbon-fibre chassis of this year’s car, performance and reliability permeate every component.

Williams Advanced Engineering (WAE) was established to exploit and commercialise the unique knowledge, expertise and technology developed from its own motorsport activities, and apply it to the company’s own products – and for customers.

Its inaugural project was the revolutionary Jaguar C-X75 – a hybrid-electric concept supercar unveiled at the 2010 Paris Motor Show (pictured above).

Tasked with creating a vehicle that achieved the performance of a Bugatti Veyron, the emissions of a Toyota Prius and the pure electric range of a Chevrolet Volt, WAE delivered a rolling showcase for innovation in aerodynamics, carbon-composite manufacture and hybrid technologies. What’s even more impressive is the timescale involved.

The C-X75 concept went from design sketch to fully working prototype in just 18 months – a third of the time a typical automotive OEM could achieve.

But this isn’t “a bunch of F1 enthusiasts making a few attractive high-end products”, WAE’s head of manufacturing, Andrew Baker, tells me;

“We are manufacturing specialists with a laser-like focus on quality, consistency and excellence.”

With a global reputation the equal of Williams’ motorsport pursuits, WAE now receives enquiries from around the world regarding potential collaborations. I asked Andrew what the criteria for project selection was?

“Customers come to Williams for help with their new innovations, to refine their design, to create repeatable, consistent manufacturing processes and to successfully commercialise the end result,” he told me. “Every project we do is geared around how to meet the engineering challenges of the 21st century: mobility, sustainability and efficiency.

“We seek out high-value projects that help drive that mission forward and make the best use of our breadth of competencies, agile workflows, quality excellence and low volume build.”

Babypod is a collaboration between WAE and Advanced Healthcare Technology to develop and manufacture a carbon fibre transport device for young babies requiring emergency transportation.

In the decade since, WAE has grown from an embryonic business of 60 to a 350-strong workforce with more than 40 live projects across automotive and motorsport, defence, aerospace energy, life science and healthcare.

As you would expect from its motorsport roots, WAE’s core competencies encompass aero and thermodynamics, lightweighting, electrification, vehicle integration, precision manufacturing and assembly, design and development, data capture and analysis, and testing and simulation.

Indeed, the business benefits greatly from being located on the same Oxfordshire site as the ROKiT Williams Racing and Jaguar Panasonic Formula E racing teams, with access to specialist equipment such as wind tunnels, simulators and test rigs. The dedicated workshop even resembles a series of Formula One race bays, a set-up proven to work particularly well for low-volume production and rapid iteration.

Everything WAE produces is tailor-made and bespoke. The ideal volume for Andrew and his team is around the low hundreds; anything higher than that typically necessitates greater infrastructure or having to outsource to external manufacturing partners.

Occasionally, however, a project proves so potentially lucrative and societally important that investing in dedicated infrastructure is exactly what’s required.

Take batteries, for example. To describe WAE as a battery specialist, greatly undersells the expertise contained within its workforce.

The business was the sole supplier of the battery system for the entire Formula E grid since the racing series began in 2014 to the end of the fourth season in 2018. Initially having to step in at the eleventh hour, WAE designed, built and delivered the battery packs in just 15 months, and achieved more than 99.5% reliability.

Through iterative engineering and learning, the business has successfully managed to increase the pack performance and efficiency each season.

Hyperbat Limited is a joint venture between WAE and Unipart Manufacturing Group with a mission to manufacture innovative high-voltage battery solutions, optimised for high-performance and specialist applications.

Its expertise originated from the introduction of KERS (including new batteries and battery management systems) in Formula One and has progressed rapidly over the 11 years since. Formula E serves as the perfect proving ground for advancing automotive electrification in the broadest sense – demanding batteries deliver ever-greater speed and performance while simultaneously balancing safety, range, recharging times and weight.

In 2018, WAE received the Queen’s Award for Enterprise in Innovation for its ability to design, develop and deliver the batteries for all Formula E cars racing in the championship, while ensuring the successful transfer of that knowledge to road cars and other sustainable transport.

That year also saw the announcement of Hyperbat Limited, a joint venture between WAE and Unipart Manufacturing Group with the goal of creating the UK’s largest independent vehicle battery manufacturer.

Based on the site of a former exhaust plant, Hyperbat’s Coventry factory aims to bridge the gap between low-volume prototype and high-volume hybrid and electric vehicle production and is capable of producing around 10,000 packs a year.

“It’s about creating a secure future supply chain for UK-based automotive OEMs as they transition to electrification, capable of providing clean, sustainable electric batteries that can be tailored to a particular manufacturer’s requirements, as well as the potential to provide similar solutions to developing marine and aircraft projects in the future.”

Andrew concluded our tour of the production facility by explaining how WAE isn’t just developing its own solutions, it is also helping to create a UK-wide ecosystem of disruptive technology by supporting other innovators.

Initial investments range between £250,000 and £3m, and the 17 businesses supported so far are as diverse as they are exciting, including:

• Oxford Space Systems – the development of deployable antennae and boom arms for nanosatellites that are lighter, less complex and lower cost than existing solutions

• Salvalco – aerosol valves enabling safe inert gases such as fresh air or nitrogen to be used as a propellant in aerosols, rather than hydrocarbons. 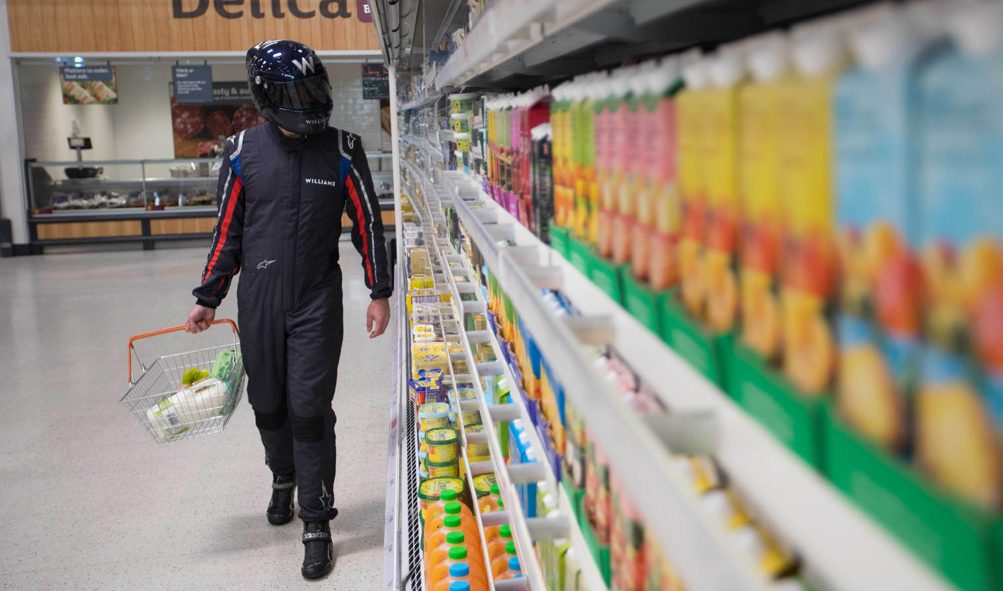 UK start-up Aerofoil Energy and Williams Advanced Engineering have jointly developed Aerofoil, an aerodynamic new device that attaches onto a supermarket refrigerator shelf, to keep more of the cool air inside the refrigerator cabinet.

Inspired and based on the design of a Formula One wing, the Aerofoil channels the cold air that falls from the top of an open fridge down the front of the fridge, preventing it from spilling out into the aisle in a supermarket.

This saves up to 30% of a supermarket’s energy costs and has the potential to save the equivalent of a month’s worth of the domestic CO2 emissions from a city the size of Manchester annually. Furthermore, all the aluminium used for Aerofoil blades and blanking plates is made from 100% recycled material.

The device is already being rolled out in UK supermarkets, with additional national and international growth expected to follow.