Posted on 3 Aug 2017 by Jonny Williamson

For Gloucester-based Safran Landing Systems, one particular challenge came in the form of a landing gear bogie beam design.

Landing gear design includes a stop-pad between the bogie beam and vertical part of the component to prevent wear as it is retracted into the fuselage. However, this impact results in potential wear at the interface, with a further risk of atmospheric corrosion.

SIFCO ASC has partnered with Safran on various surface finishing projects for more than 20 years including more recent work to increase wear resistance on one of the aircraft’s axles.

These projects are carried out using SIFCO’s selective plating proprietary process – a leading method of electroplating localised areas on components without the use of an immersion electroplating tank.

It initially approached SIFCO ASC to investigate the potential of the ‘SIFCO Process’ for a nickel plating application.

While it was advised that this could be solved by manually plating a layer of nickel underneath a layer of chrome on the section of the bogie beam affected by corrosion, Safran’s robust manufacturing quality standards required the process to be highly traceable and repeatable.

As such, SIFCO ASC’s UK team recommended the process should be automated using a collaborative robot – something which had never been done before.

After more than three years of collaborative research, development and testing, the selective plating robot is now fully operational at Safran Landing System’s Gloucester facility, performing a precise and highly traceable, repeatable and accurate process, well-suited to the hi-tech facility it sits within.

The integrated computer logs all of the relevant information including: the parameters plated; the batch numbers for the solution; current densities and solution levels. The fully-automated system also adheres to the company’s health and safety policy as it minimises human contact with harmful chemicals.

It currently processes 30 bogie beams each month to a consistent plating uniformity,  and the team is looking to expand its use into other areas of the company.

The UK’s biggest showcase for the Fourth Industrial Revolution (4IR) – a revolution in manufacturing agility, innovation and thinking.

Highlighting the best solution providers and technology offerings, this unique FREE event is for manufacturing business leaders keen to adopt the relevant tools and knowledge to drive business growth. 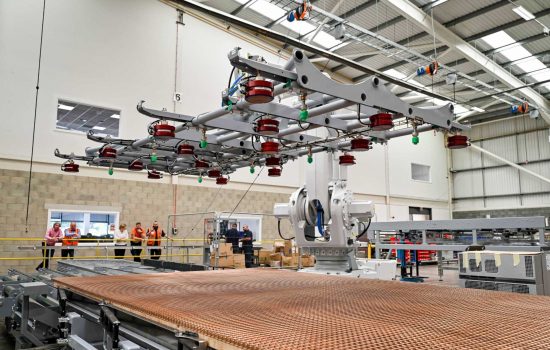