Xtrac is in pole position

Following a record year, Peter Digby, Managing Director of Xtrac, talks with Jonny Williamson about building on the success of 2014 and maintaining the company’s global reputation.

It’s an overcast and grey morning when I sit down to talk with Xtrac’s Peter Digby, so his cheerful demeanour comes as a welcome distraction. The managing director has every reason to be so happy, with numerous successes on both a personal and business level – though you’d be hard pressed to separate the two for this passionate motor racing devotee.

“2014 – Xtrac’s 30th year in operation – has just been fantastic for us, and beating the likes of Rolls-Royce, BAE and Babcock to take home the overall Manufacturer of the Year is a clear acknowledgement of the whole team’s hard work and dedication,” he explains.

The components which combine to produce Xtrac and its subsequent successes aren’t unique, Digby admits, but they are things that everyone has bought into whole-heartedly and without reservation.

He cites the company’s firmly entrenched family culture and employee shared ownership (with every one of the 280-strong workforce a shareholder) as being significant factors, alongside its well-established apprenticeship and training programmes.

Having been involved in motorsport for more than three decades, Xtrac is renowned in the high-level worlds of Formula 1, Le Mans and Indianapolis.

Priding itself on producing the highest quality and offering the best service, the company hasn’t been known for offering a low-cost product; however that changed in June 2014 when Xtrac launched a very competitively priced new gearbox for GT cars. “A move which came as quite a surprise to the entire marketplace,” says Digby, “None more so than the company’s competitors.”

To date the GT gearbox has been adopted by McLaren and Lamborghini, with a number of others preparing to be announced shortly. Digby says it’s been quite a change to Xtrac’s business, but so far expanding its reach to not only cater to the very top end, but take in the medium and some of the lower levels of motorsport as well, has proven successful.

When pushed as to the reason behind such a dramatic change, he candidly replies that Xtrac was at risk of becoming a victim of its own success.

In motor racing being number one is incredibly important, he states, adding that for many areas of the business, Xtrac had more or less saturated the market.

“The upside of that is having the confidence to know we can sell very large numbers of gearboxes, so rather than making them in small batches of ten or 20, we made 100 which resulted in a lower individual price. The first 100 sold almost immediately and we are already producing a second batch.”

The other big change of late arose from Xtrac launching its first non-motorsport division – automotive & engineering – to supply gearboxes for hybrid and electric supercars. Though he describes it as still ‘a niche market’ currently, Digby expects the automotive sector to become far more involved in the next level of hybrid and electric vehicles in the coming years, predicting a rise in ‘very lean burn internal combustion engines’ and a decline in interest towards diesel.

Having been an engineering apprentice himself, Digby recognises the importance of nurturing the next generation of talent and is very proud of Xtrac’s annual intake of five apprentices and four graduates.

Having built up a highly regarded reputation both in the local region and wider industry, Xtrac received more than 100 applicants for this year’s five apprenticeship positions and interestingly, notes Digby, all of the recent apprentices were aged 18 and had A-levels or equivalent rather than arriving straight after school at 16, adding that with an ever increasing benchmark, even he might struggle to be accepted these days. 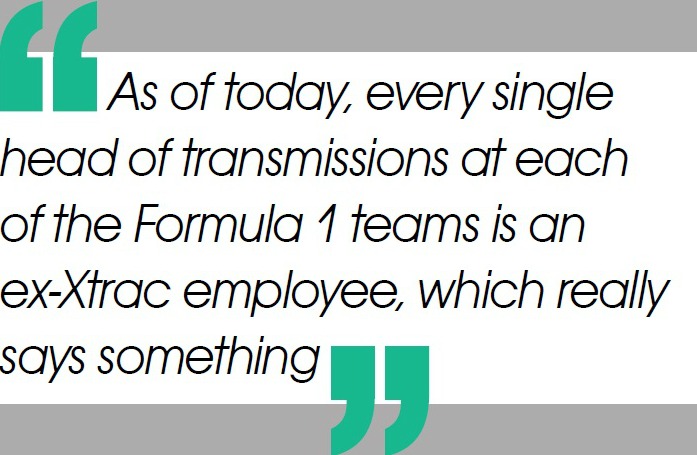 A recent analysis showed that following their initial training, almost 60% of Xtrac’s apprentices remain with the company for a minimum of five years; a solid baseline. However the managing director is keen to see it raise higher.

“Where we tend to lose them most is Formula 1 teams in need of mechanics and engineers. In fact, as of today, every single head of transmissions at each of the Formula 1 teams is an ex-Xtrac employee, which really says something. Although it can be frustrating to lose somebody, occasionally we are approached for a recommendation, and the person leaves the business with our blessing.”

Xtrac has taken on several female apprentices over the course of its history, though Digby accepts that the ratio is still in the minority. Eager to see an increase in young women’s interest in apprenticeships, he was recently invited to Downing Street to discuss such challenges.

“The young women who’ve joined Xtrac have all performed incredibly well, especially in areas that require a high level of attention to detail. We are currently working with the Motorsport Industry Association to improve how the dynamism of engineering is sold and better reflect the worthwhile careers industry offers to both young men and women.”

Digby’s meeting with Prime Minister David Cameron leads me on to my next question, that of how the Government can better support UK industry – particularly pertinent with 2015 being an election year.

“I’d like to see anything introduced to help finance genuine apprentice schemes, i.e. not stacking shelves in a local supermarket, where I feel they may have been over-used, but rather furthering legitimate three or four year engineering apprenticeships,” he responds.

“Generally, the Government has been pretty good in supporting industry, with R&D tax credits made for companies such as Xtrac. From the investment we’ve made in machinery, I’d like to see some improvements in capital allowances, and touching on our own sweet spot, anything to cut the red tape and help make creating employee owned companies easier.”

Focusing on the task at hand, Digby says surpassing the successes of 2014 will be no easy task, but the business has got off to a great start with all initial budgets and forecasts exceeded, several new products in the pipeline and an order book 10% greater than where it was this time last year.

In late-2014, Xtrac was awarded a substantial new contract from the FIA and ACO (the governing organisations of Formula 1 and Le Mans respectively) to produce a new gearbox for the new LMP3 Formula, and it has just landed new orders in China and South America, where it already heads up the biggest Formulas in Brazil and Argentina.

Having worked in motorsport for virtually his entire career, Digby has seen many innovations come through and he says the popular phrase “race on Sunday, sell on Monday” is still very applicable. He cites carbon fibre as one such development, with the composite material having had strong support in motor racing for almost a quarter of a century and, as the materials cost has reduced, its very high strength to weight ratio has been increasingly incorporated in production vehicles.

Xtrac’s business innovations draw on a combination of being externally marketplace or customer-led, and internal R&D or suggested by staff, on the broad understanding that “if it’s a good idea, it shouldn’t be left sitting in a filing cabinet,” says Digby.

Reflecting on the big challenges facing industry, the managing director highlights the fact that the UK isn’t a low-cost manufacturing centre, with Asian and Eastern European firms, for example, able to purchase identical machines to those that Xtrac employs.

He says UK manufacturing must look to the top end of the marketplace where it can specialise, innovate and add the most value, as well as become more involved in new technologies, directions Digby has worked hard to align Xtrac’s path to.

“That’s really where we concentrate our efforts, new technology, low volume, high quality and short delivery time, and build a fantastic brand along the same lines as JLR or McLaren. British manufacturing is once again fashionable, we have a whole host of high profile products and brands to be proud of, and Xtrac is honoured to be a part of that.”