Additive manufacturing from Renishaw brings hope for a Parkinson’s cure

Every hour, two people in the UK are told they have Parkinson's disease. A device created via additive manufacturing has enabled the precise delivery of a new drug candidate that could potentially reverse the condition.

It is estimated that one in 37 people alive today will be diagnosed with Parkinson’s disease in their lifetime.

Parkinson’s is a progressive neurological condition that affects predominately dopamine-producing neurons in a specific area of the brain.

The cause of the disease remains largely unknown, and currently there is no cure for Parkinson’s.

Parkinson’s UK estimates around 145,000 people were given a diagnosis of Parkinson’s in the UK in 2018. With population growth and ageing, this is likely to increase by a fifth, to around 168,000 people in Britain by 2025, according to the organisation.

Cost: A burden on the NHS

Research from UCL also found that post-diagnosis, the cost of healthcare for patients with Parkinson’s – including hospital visits and medications – averaged £5,022 per year, per patient.

But the researchers believe this is an underestimate of the total costs of care, as it did not include out-of-pocket expenditures by patients, privately insured spending, care-giving costs, or social costs such as lost earnings or costs to social services. They estimate the total cost of Parkinson’s is almost five times that.

The trial, funded by Parkinson’s UK and in association with the North Bristol NHS Trust, aimed to investigate whether boosting the levels of a naturally-occurring protein, Glial Cell Line Derived Neurotrophic Factor (GDNF), can regenerate dying brain cells in people with Parkinson’s and reverse their condition, which is something that no existing treatment can do. Renishaw built the drug delivery device used in the trial using additive manufacturing techniques.

UK-based Renishaw is a world leading engineering technologies company, supplying products used for applications as diverse as jet engine and wind turbine manufacture, through to dentistry and brain surgery.

The company’s largest markets are China, the US, Germany and Japan.

TM Editor, Jonny Williamson visited the business last year in South Wales to see its innovative approach to engineering in action, read the write up here.

The global firm worked with consultant neurosurgeon professor Steven Gill to create the drug delivery device to offer a new method to bypass the blood-brain barrier.

During the trial, 42 patients had the AM titanium port embedded into their skull through which GDNF could be delivered via micro-catheters to the putamen, a critical region of the brain for motor function, this something Parkinson’s disease adversely impacts.

Renishaw manufacture a diverse range of products including these 3D printed metal bone implants (below) that could last longer than regular hip and knee implants, be more durable and potentially save the medical industry money (image – Stryker Orthopaedics). Read more about them here. 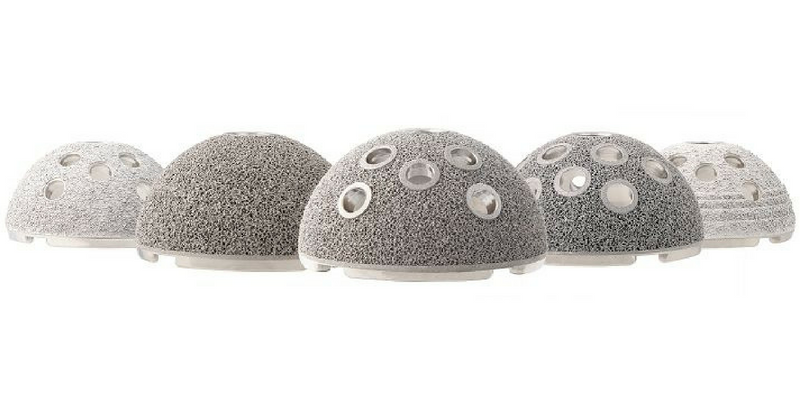 The device was implanted using the Renishaw ‘neuromate’ surgical robot, which positions four catheters into the brain.

Results showed that the drug delivery system performed effectively and reliably and a similar device, developed by Renishaw called ‘neuroinfuse’, is now being used in other clinical trials.

The drug delivery method could be crucial, if the device can enable the best method for precise drug deployment then that provides an extremely strong foundation for drug testing and trials in order to achieve the most effective treatment for not only Parkinson’s, but any other disease that would benefit from this method. This could also enable much needed savings to the NHS.

“This is a significant breakthrough in our ability to treat neurological conditions, such as Parkinson’s because most drugs that might work cannot cross from the bloodstream into the brain due to a natural protective barrier,” says Gill.

“This trial has shown that we can safely and repeatedly infuse drugs directly into patient’s brains over months or years through a small implanted port that emerges through the skin behind the ear.”

He concludes, “Even at a low dose we have seen evidence of patient improvement, which is incredibly encouraging. Now we need to move towards a definitive clinical trial using higher doses and this work urgently needs funding. I believe that this approach could be the first neuro-restorative treatment for people living with Parkinson’s which is, of course, an extremely exciting prospect.”