Posted on 6 Oct 2015 by Jonny Williamson

A groundbreaking 3D radar system, capable of detecting objects as small as a tennis ball and travelling at three times the speed of sound more than 25Km away, has been successfully installed to the Royal Navy’s future aircraft carrier, HMS Queen Elizabeth.

Known as Artisan 3D, the radar system will be used for the first time to deliver air traffic management, providing the aircraft carriers with unparalleled awareness and control of the skies around them.

The successful installation of Artisan took place in late September, marking another major milestone in the preparation for sea trials.

Designed and developed by BAE Systems, the Artisan 3D system can monitor more than 800 objects simultaneously from 200 to 200,000 metres and cut through radio interference equal to 10,000 mobile phone signals.

The radar system has already proven its capability to deliver uncompromising air defence and anti-ship operations on the Type 23 frigate and helicopter carrier.

Director for products and training services at BAE Systems, Les Gregory commented: “Artisan is a ground-breaking radar system that delivers real capability to the Royal Navy in its supreme accuracy and uncompromising tracking.

“In addition, its world-leading electronic protection measure ensures that even the most complex of jammers will not reduce its effectiveness.  We have already seen the radar perform excellently on the Type 23 frigates and are proud to be able to bring this advanced technology to the Royal Navy’s new aircraft carriers utilising its air traffic management capability for the first time.” 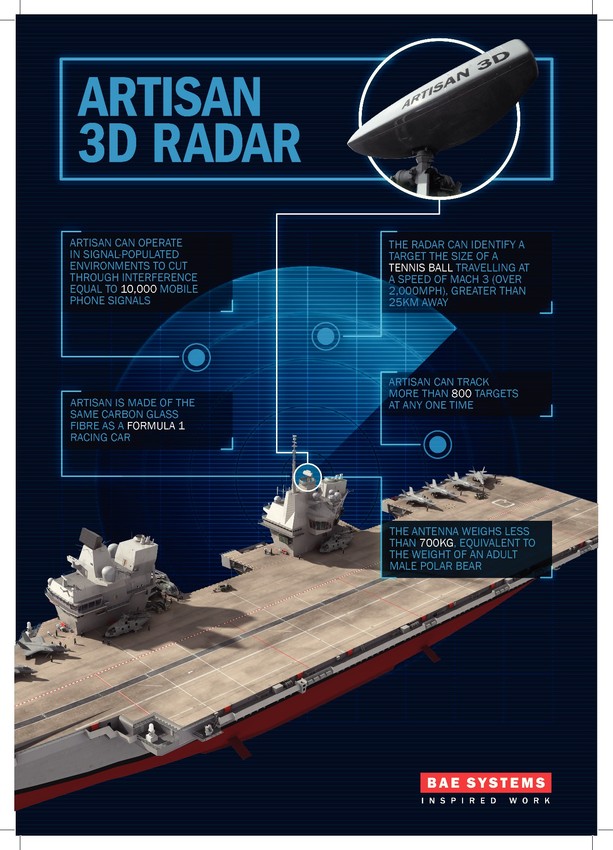 “The construction of the Queen Elizabeth Class carriers has created and sustained thousands of UK jobs and will act as a spearhead for our naval capability for years to come.”

The new aircraft carriers will become the flagship of the Royal Navy and demand the very best radar technology to deliver uncompromising carrier strike capability anywhere in the world.

The carriers will also be versatile enough to be used for operations ranging from supporting war efforts to providing humanitarian aid and disaster relief.

BAE Systems designed and developed the Artisan 3D at its sites in Cowes, Chelmsford and Portsmouth, with preparations to install the radar system on to HMS Queen Elizabeth taking two and a half years with engineers from BAE Systems working closely with the Ministry of Defence.

Part of this work included creating a life-sized mock-up of the carriers’ aft island in Cowes which was used to hone the radar’s interaction with the combat systems on-board the Queen Elizabeth Class carriers, to deliver an optimal integrated solution.