Posted on 4 Oct 2022 by James Devonshire

Following its emphatic win in the People & Skills - Large Enterprise category at last year’s TMMX Awards, AE Aerospace has had its share of turbulence over the past 12 months. But that hasn’t stopped the Birmingham-based business pursuing its upward trajectory. The Manufacturer’s James Devonshire recently caught up with Managing Director Peter Bruch to find out more about the machine to print, precision machining company.

Tell us about AE Aerospace’s background

PB: AE Aerospace is just over 30 years old, in its original form. It started out from what used to be called Goodrich – Shaftmoor Lane, now Rolls-Royce Control Systems at The Derwent Building in Birmingham.

At the time, Rolls-Royce (as it’s now known) wanted to subcontract some of its machining work, so two of the guys there set-up on their own with a bunch of machines to meet the new requirement. The newly founded company, Able Engineering, enjoyed significant growth over the years up until the financial crisis of 2008.

I came in five years later, in 2013, to help turn the business around and return it to its former glory. Nine months after that, I became one of the owners and that pretty much takes us up to today.

What kinds of components do you manufacture?

AE Aerospace is a machine to print subcontractor for the aerospace, marine and defence sectors. We make everything from two-millimetre washers to 1.5-metre struts for engine mount kits, as well as a range of stuff in between, including prismatic five-axis valve body-type components.

As you can appreciate, we make a whole variety of stuff, from prototype through to pre-production, OE production, as well as spares and repair work. It can be anything from an absolutely brand-new items that haven’t even been CAD’d up yet, to full CAD models, or even potentially making something from a drawing that’s 70 years old.

So we’re pretty complex and have a deep range of skills and capabilities. 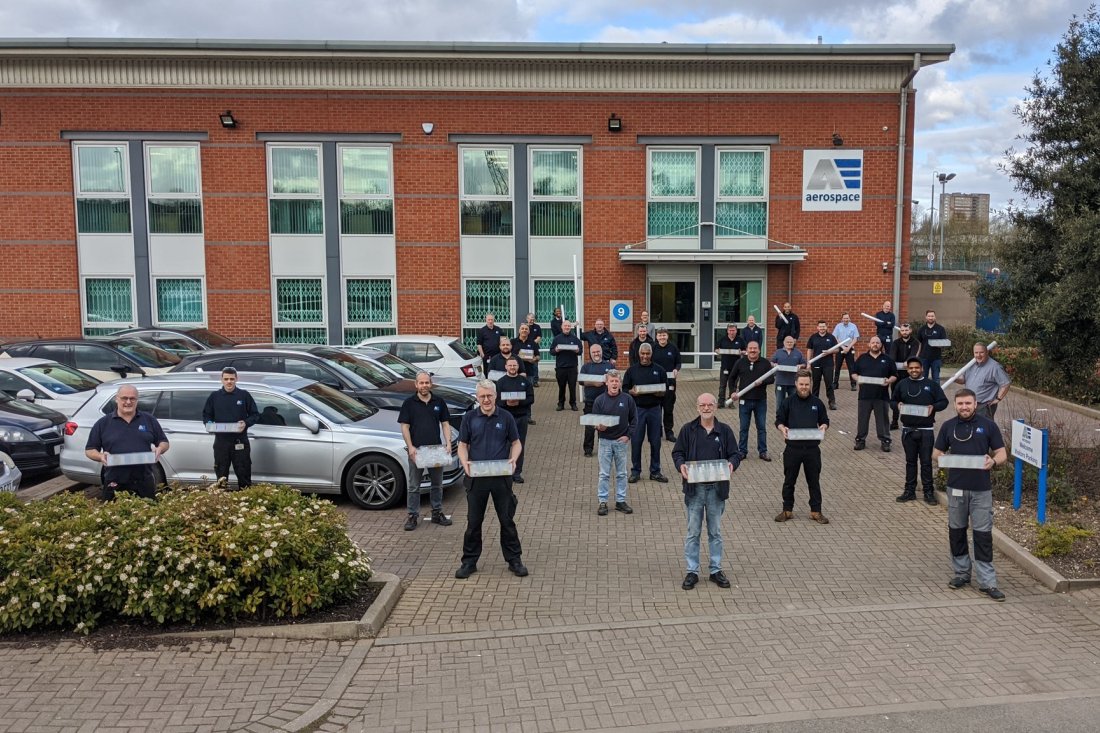 The AE Aerospace team outside the company’s Birmingham plant

How about AE Aerospace’s culture?

On the culture side of things, we’ve tried to move very much away from a command-and-control setup. Instead, we encourage our people to make their own decisions. Fortunately, they have the data around them to allow them to make those decisions and they usually have a good go to see what they can do to try to make things work. It’s something we try to be very supportive of and nurture where possible.

If things go right, great! We celebrate the success. When things go wrong, we sit down and try to work out what happened and why it didn’t work. In other words, we use it as a learning exercise for all involved and emerge better from the other side as a result.

We also have a no-fly zone each morning, like a lot of bigger companies, which sees us all coming together at a department level and at a whole business level. It’s designed to ensure everyone understands what needs doing and where our focus should be placed. Metrics are also freely available and we have a monthly communications meeting where we update our people with the latest information.

How are you tackling the skills gap currently being faced by most manufacturers?

First and foremost, we are huge champions of apprenticeships. We’ve just taken on two for this year and find our apprentice programme is extremely positive. I myself was an apprentice, albeit an accelerated one, as were many others within the business.

We operate slightly differently than other companies when it comes to apprentices in that we don’t expect them to stay with us for a set period of time after they’ve qualified. At the end of the day, if someone wants to leave, there is no point in pressuring them to stay. And it’s been our experience that we lose apprentices from time to time to other companies, but also gain newly qualified talent ourselves. It’s kind of like a cycle that just works.

We were also part of ADS Group’s SC21 Programme, which was designed to increase the competitiveness of the aerospace and defence sector by raising the performance of its supply chains. Unfortunately, though, we didn’t get as much out of it as we’d have liked because the onset of the pandemic saw our priorities shift to focus on survival. Nevertheless, it was still a worthwhile venture and helped boost some of our people’s knowledge. 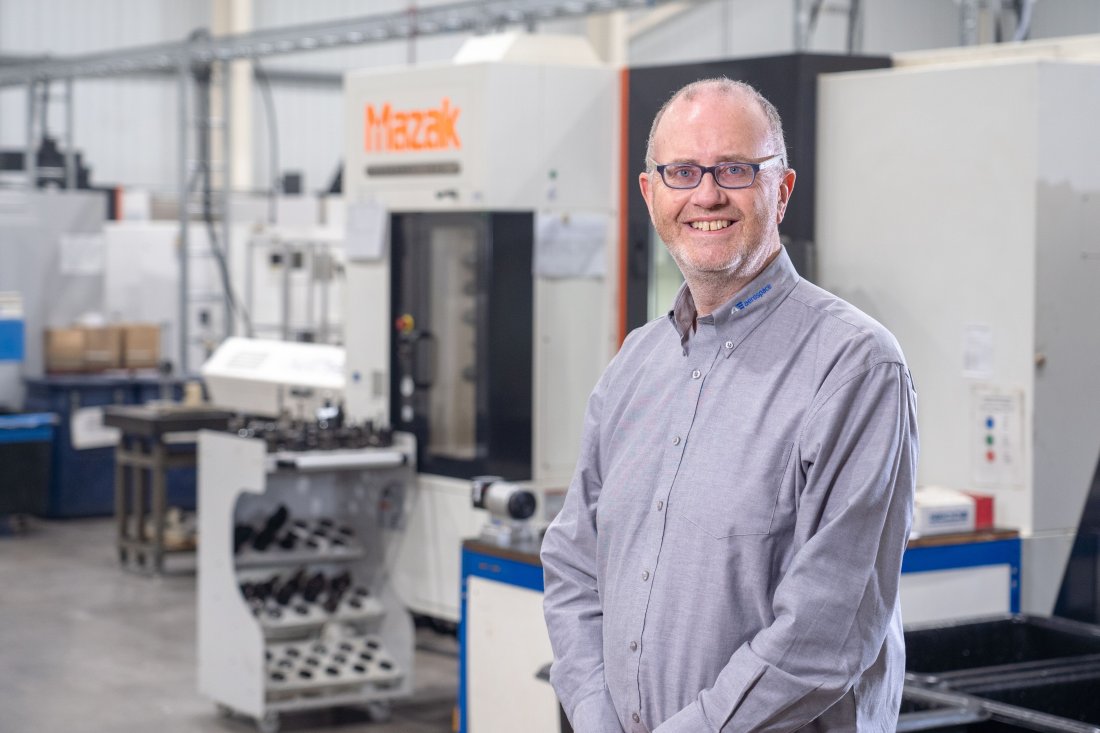 And how about The Manufacturer MX Awards?

Well to start with it’s safe to say that we were stunned to win. There were a lot of really big names there and we certainly weren’t expecting to walk away with the award.

In terms of driving forces, I think our apprentice programme really helped. We’re also very closely tied in with Make UK for our craft and engineering apprenticeships, as well as a number of other Birmingham-based apprenticeship programmes. But we also go higher than that.

Throughout the business, we go from level three to level seven. For example, some of our senior staff are on level seven apprenticeships, which allows us to develop them ready for the future when they’ll inevitably be running things.

I also think the fact that over 20% of our team was on an accredited apprenticeship at the time was very important. Furthermore, our involvement with the SC21 programme meant a lot of our people were on various training programmes, which helped significantly when it came to us winning the category.

So I think the judges were taken a little by surprise when they saw a lot of stuff that you would expect to see in a corporation or a large company, and we’re here doing it as an SME.

From our own records here at The Manufacturer, one judge commented: “They [AE Aerospace] have a strong desire to train and develop young people. We could feel genuine support from the leadership who wanted the best for everyone”.

What about the actual TMMX Awards process?

We use external audits, whether it be AS9100 or customer audits as learning experiences. We think we know what we’re doing. We think we’re doing a decent job, but it’s always helpful for someone to come in and actually judge us on it.

Whether that validates where we are in the process, or, more often than not, says, “you’re doing alright but you could do this or that to improve.” It’s a massive help to us.

Part of the process involves interviews, which are also extremely helpful as they get you to really think about the answers. So, the questions are asked in a certain way that’s almost as though the interviewer is coaxing answers out of you. I think that helped us significantly in how we’ve tried to move forward.

Every time we enter awards, it’s an opportunity for us to look at ourselves internally to see how and what we’re doing. And we also try to look at what other people are doing, to see if we can become the best in class, as it were.

Can we expect to see AE featured in this year’s TMMX Awards?

Unfortunately, no. We didn’t enter this year as we’ve been through a lot in recent times. The pandemic hit us extremely hard, to the point where we actually went through a trading administration last October, for various reasons. I was able, after some fight, to buy the business back from the administrators.

We’ve decided to focus very much on the business itself for at least the next couple of years, to make sure we’re here for the long haul. 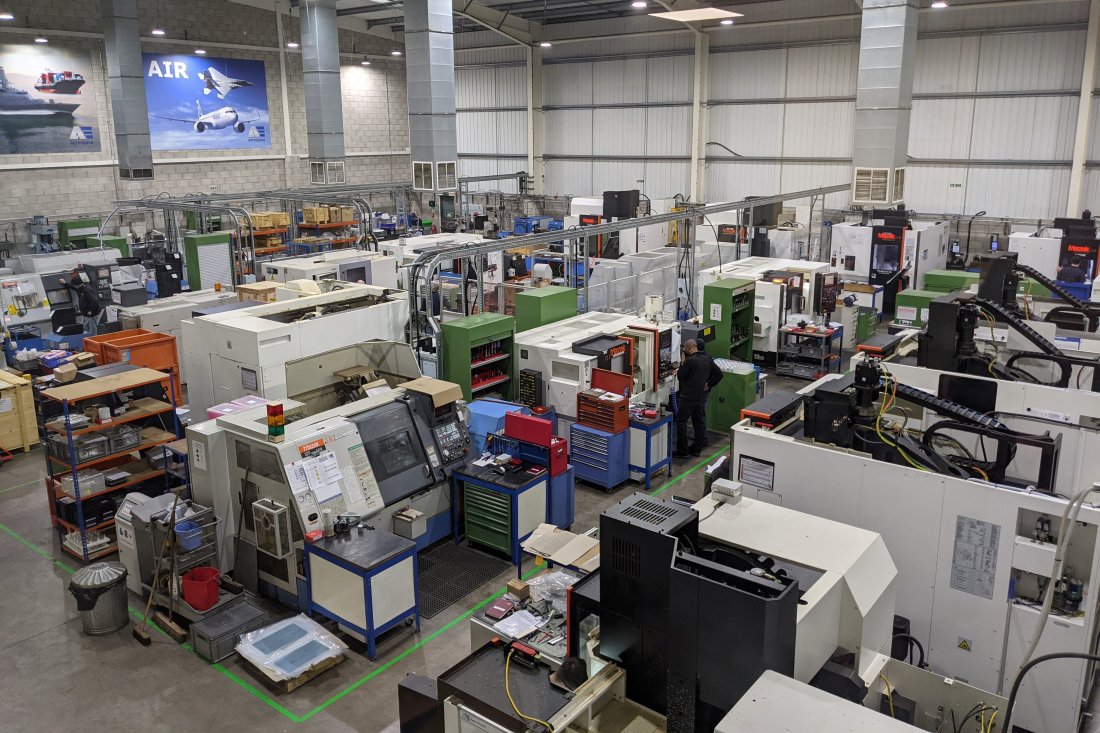 Finally, what’s on the horizon for AE Aerospace?

We’ve been through a lot but there is plenty to focus on going forward.

We were at Rolls-Royce a few months ago and they said they were now focusing on a decade of growth, which is good news for us. It’s a similar story at Airbus where they are looking to produce roughly 45 A320s a month, with the ultimate goal to hit 63 a month in the next two to three years.

There’s a lot of talk about recession, but people want to fly, they like flying. The defence side of things is also increasing, what with ongoing world events.

Overall, we’ve got a full order book and that’s a very fortunate exposition to be in considering where we’ve come from. Now, it’s just a case of getting it all out the door.