The Apprenticeship Levy: an exercise in failure

As part of a series of articles on some of the many problems - and highlights - of the skills and training system in the UK, we explore the serious flaws in a key plank of government skills policy.

We have to hope that history will look back at the Apprenticeship  Levy as the lowest point in the sorry story of skills training in England.

Designed to reverse the decline in apprenticeships that began with de-industrialisation in the 1970s and 80s, it has instead accelerated their decline.

All good intentions have been broken on the wheel of Treasury parsimony. The full story of its uselessness is told in an excellent series of reports by Tim Thomas, director of Labour Market and Skills Policy at Make UK – the link to which is at the end of this article.

The catch is that the money was never ring-fenced. The money – currently about £2.7bn annually – goes straight into the Treasury’s general fund, so it’s a tax, or an NIC adjunct as Make UK’s Tim Thomas describes it.

For any money to reach its intended destination, the Department for Education (DfE) has to negotiate with the Treasury, whose every sinew is bent to squeezing how and where money is spent. They have some incentive to do that, because of a peculiar contradiction buried deep in the heart of the legislation.

Levy-payers – bigger companies – receive a 10% premium from government on the amounts they draw down from their Levy accounts, as an incentive to spend it.

You can see where this is going: if every company paying into the Levy spent all the funds they pay in, then it would cost the Treasury a further unbudgeted £270m.

Quite apart from the fact that the Levy is only partly funding new apprenticeships – the cost of funding legacy schemes pre-2017 comes out of new money – there are some wrinkles emerging that should surely have been foreseen.

New apprenticeship standards are being worked on by the the Institute for Apprenticeships and Technical Education (IfATE), which was established at the same time as the Levy.

This employer-focused body set out more complex and therefore expensive courses than the Levy originally anticipated, which means the Levy is under yet more financial strain.

And then smart Levy-paying employers began to see that they could redefine what is meant by apprenticeships.

We automatically think of them as being for young people of school leaving age (levels 2 & 3), with a diminishing number of level 4 & 5. But the legislation allows for some tweaking.

So, a mid-level manager taking a mid-career MBA is now a “Management Apprentice”. Look at this tweet from the AMRC, suggesting Levy funds be used to send existing employees on degrees courses: 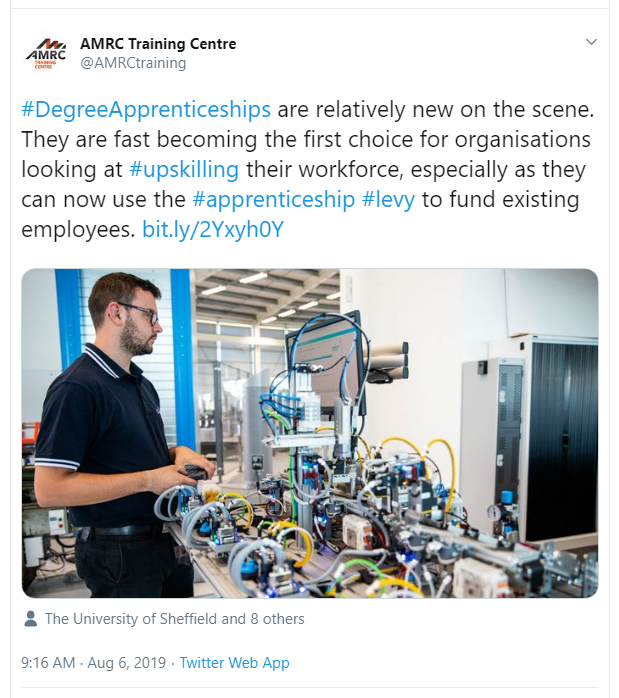 There is nothing wrong with it at all, but one has to ask if these same companies would have paid for these courses, and perhaps mid-managers’ MBAs, anyway before the Levy? I

f so, then all they are doing is (understandably) using their Levy funds, which should instead ideally be used to bring new young people into industry.

The day when the Apprenticeship Levy will be exhausted is not close, although as employers get to grips with its complexity, uptake will improve. After all, we should want it all to be spent, no?

Yet part of the malevolent genius of British government is that having once promised to spend money, they make it as hard as possible for those who need it to get it. Tim Thomas’s Make UK reports go into all the detail, but here is a small illustration:

The cost of apprenticeship is financially front-loaded in Year One, yet the government will only release 80% of the money in equal amounts on a monthly basis over the life of the training, and then pay the remaining 20% as a balloon payment, to encourage completion.

That means the employer has to pay the training provider under normal commercial terms, and then wait for the Levy fund to catch up. Little wonder employers are being demotivated!

As I write that, there is part of me that says, hang on! Shouldn’t companies be paying for their own training? Why rely on central government? The answer is of course, yes, companies should do this for themselves.

(And many do: see here for a group of Shropshire employers who are doing some amazing things.)

In just about every other industrialised country, that is the case. In Germany, for instance, employers work together to set standards while courses are provided through regional vocational schools funded by government.

It’s a system founded on partnership, with employers providing the policy lead because they, above all, know what kind of employees they want to train up. The VET system, as it is known, is admired and envied around the world, and yet in England central government insists on leading – and badly.

Can the Levy be changed to work better? Make UK believes it must, but only through reforms that would make it unrecognisable in its current form.

For instance, they suggest it should cover all training costs, not just apprenticeships. While retaining the current funding model, they want the money hypothecated and the way it’s spent changed so that it can grow to meet demand.

The full list of reforms, many of them quite technical, is available from their latest report into the Levy.

Fundamentally, what they suggest is changing the Levy so it does what it set out to achieve, which is attract more young people into vocational training at Levels 2 & 3 (essentially 16-18).

All the other forms of high-level training are admirable and deserve funding, but unless a significant number of young people are attracted at the very earliest age possible into vocational training and apprenticeships, the net trend will continue downwards and manufacturing’s skills crisis will worsen.

Our view is that on top of reforming the Apprenticeship Levy and government funding of further education generally, employers have to stop seeing government as the (largely inadequate) answer to their needs and start diverting more of their own cash into training and apprenticeships.

There is no such thing as a free lunch and even if there were, Whitehall is not the best place to eat it.

With all the other minefields confronting manufacturers at present – yes, Brexit – whatever problems they create will, unless they are existential in nature, be overcome in time.

The skills gap is not like that. It is real, and deeply dangerous. How ironic and frustrating would it be for manufacturers to weather external storms like Brexit only to discover they are unable to keep going because they cannot find anyone who wants or is qualified to work for them?