A new paper, The Road Less Travelled? Improving the apprenticeship pathway for young people, published today (7 November) by The Work Foundation calls for a fundamental reform of apprenticeships in the UK.

It reveals that the current system – designed when manufacturing and production were the dominant industries – needs a radical overhaul if it is to provide young people with strong vocational pathways into the labour market and help tackle the UK’s youth unemployment crisis.

The analysis finds that the current model is not functioning as an effective pathway from education into work, with just 6% of 16-18 year olds enrolled on an apprenticeship programme in 2011. Instead, the recent rise in the number starting apprenticeships is explained by an increasing take up amongst those aged over-25 (see figure below) with many of those starters (71% in 2011) already being existing employees. Of particular concern is the prevalence of level two apprenticeships (equivalent to five GCSEs) – 68% of under-25s (2011) – compared to Europe where level three (equivalent to two A Levels) is the norm.

The report goes on to identify how demand for apprenticeships among young people currently outstrips the supply despite a fragmented system of careers advice and guidance. This situation will only worsen in the coming years when the age of compulsory participation in education or training rises to 18 in 2015, unless better careers advice is offered and a greater number of employers engage in the system and offer more quality places.

Katy Jones, author, said: “Youth unemployment has been rising since the early 2000s and has remained at around one million for some time now. A coherent apprenticeship policy would go a long way in helping to tackle this crisis. But apprenticeship policy is currently in flux and has, so far, failed to take account of the long-term shift towards a service economy.

“There must be clearer guidance around the national apprenticeship wage – for both employers and apprentices – especially in sectors such as social care, where a relatively high proportion of apprentices are paid below the legal minimum. Employers who do not meet this should be sanctioned, and recognise that the minimum wage provides a minimum floor. Where possible employers should be encouraged to pay apprentices more.”

Commenting on the government’s Implementation Plan for apprenticeship reform in England, Katy Jones, went onto say: “The limited representation of service industries in the government’s Trailblazer pilots is a missed opportunity to develop pathways into higher quality service occupations, particularly given that services account for 85 per cent of overall UK employment. Government has also lowered the minimum training requirement for 30% off-the-job training to just 20%.”

The report concludes by identifying four key areas which need fundamental reform:
1. Improving apprenticeship pathways as a route into skilled work for young people through improved careers advice and guidance, and ensuring traineeships are available for all those young people who are not yet ready to undertake a full apprenticeship
2. Better promotion and regulation around apprenticeship pay
3. Increasing employer engagement by improving links between schools and employers;
4. And improving the educational content of apprenticeships – especially by expanding both advanced and higher level apprenticeships. Increasing the current statutory minimum of 280 hours of Guided Learning per year would bring it more in line with international standards. 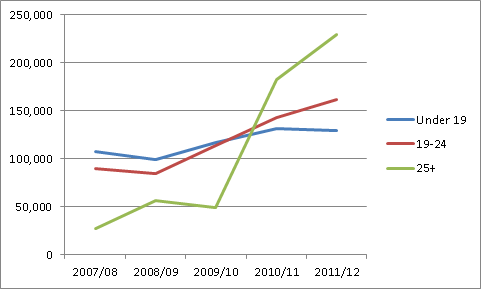