Are hydrogen-powered aircraft about to take off?

COVID-19 wiped out 15 years of passenger air traffic growth almost overnight. As the world steadily returns to the skies, the sustainability of air travel is coming under greater scrutiny. With the search for alternative propulsion technologies heating up, could ‘green hydrogen’ represent the next oil revolution? Paul Perera certainly thinks so, and having led the hydrogen ambitions for both Rolls-Royce and GKN, he knows a thing or two about the subject. Jonny Williamson sat down with him to learn more.

You believe aircraft powered by hydrogen, either from direct combustion or via a fuel cell, represent significant growth opportunities for UK manufacturers. Why?

Paul Perera: Many of the changes hydrogen brings to an aircraft relate to areas the UK leads in. For example, the wings will likely be different in design but will still form an integral part of the aerostructure.

This is good news as wings represent about 90% of aerostructure work for UK-based operations such as GKN and Spirit AeroSystems.

Within the fuselage, the fuel tank is the most complex, important structure and due to the extreme low temperature of liquid hydrogen, cryogenic tanks are the most likely option. These tanks are effectively large metallic pressure vessels and incredibly high value.

The UK is already working to establish a supply chain in order to deliver comparable vessels to the nuclear industry, a capability that has clear cross-sector transferability.

Hydrogen fuel tanks weigh more than traditional tanks and the fuselage is likely to be longer. This means that landing gear will need to be configured for heavier landing weights. Several prominent landing gear manufacturers have operations in the UK, including Safran and Messier-Dowty.

The fuselage is going to change the most, from a pure manufacturing perspective. This represents a big opportunity as UK industry isn’t that deeply involved in fuselage production currently.

Of equal, if not greater, interest is the opportunity to move into lucrative new markets by leveraging existing domestic capability. For example, we know that hydrogen is a viable means for taxiing aircraft around an airport.

Converting diesel or auxiliary power units to hydrogen fuel cells could see UK-based manufacturers taking a slice of business from the likes of Honeywell or Lycoming in the US. 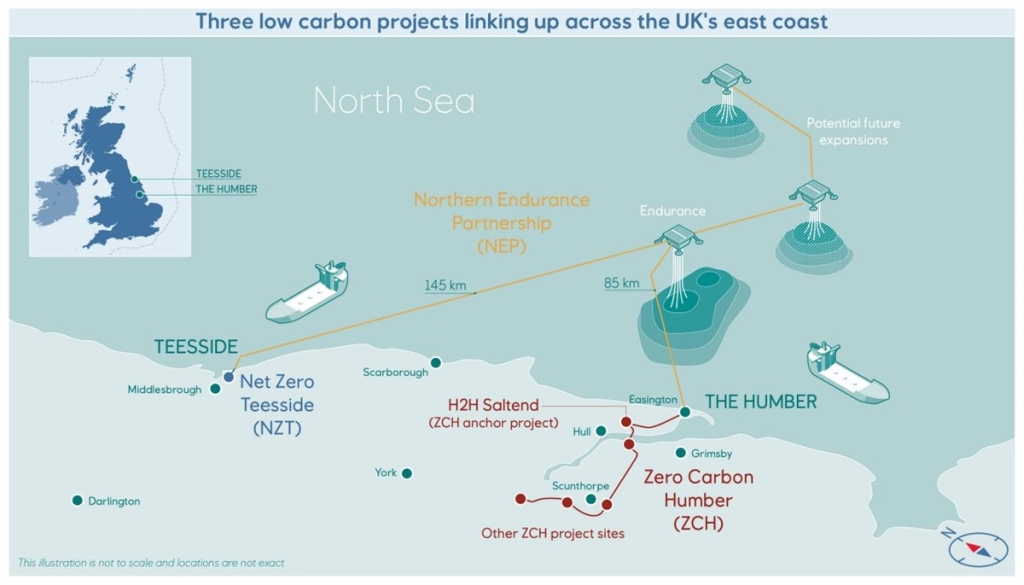 The Gigastack project, led by ITM Power, Ørsted, Phillips 66 Limited and Element Energy, will use renewable hydrogen to support the UK’s net zero by 2050 target Image courtesy of ITM POWER.

Small manufacturers account for the majority of the aerospace supply chain. What should they be doing to exploit these opportunities?

There are three key elements here. ONE – become familiar with the changes hydrogen brings to an aircraft, identify your key strengths and understand what you are doing today that has relevance to the future.

TWO – focus on the opportunities not the threats. If I was a pump or valve manufacturer, I’d be looking closely at how cryogenic pumps and valves are produced. If I was making electric motors, I’d be delighted to see the potential for more applications.

If I was involved in gas turbines, the temperature of combustion may rise but most components will remain the same. We may see a decline in long range and wide body aircraft, but that may be offset by a rise in short-haul or regional jets.

You should also be exploring transferability into sectors beyond aerospace. Hydrogen has applications in marine, automotive, rail, public transport and heating, and there’s work currently underway to make those applications a reality.

THREE – What will be vital is producing these parts cost-effectively and at scale. Embracing Industry 4.0 technologies, particularly advanced automation, will be key if the UK is to compete with the likes of China on the world stage. 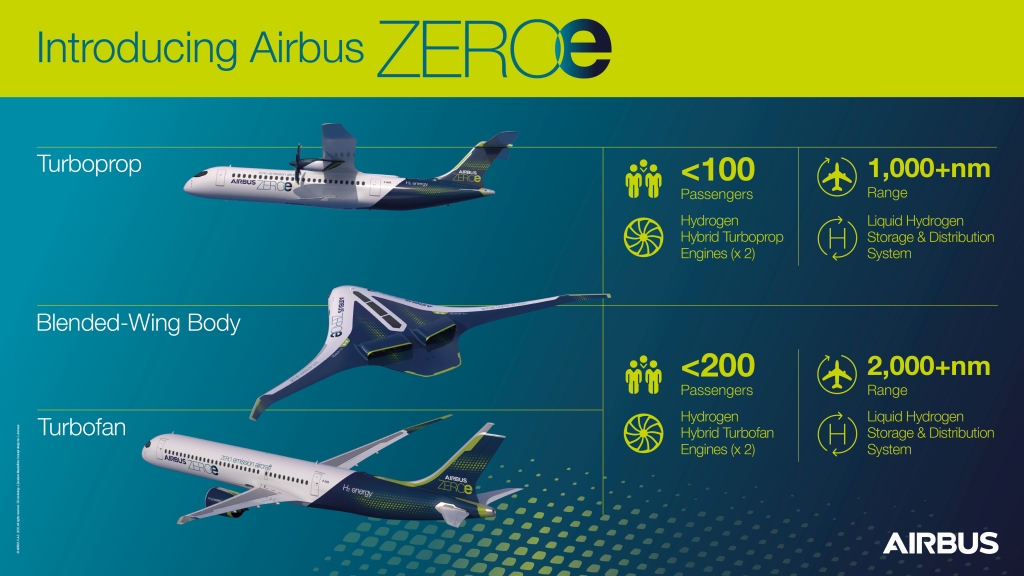 Three concept aircraft are enabling Airbus to explore a variety of configurations and hydrogen technologies that could shape the development of future zero-emission aircraft. Image courtesy of Airbus.

Where is this push for hydrogen aircraft coming from, wasn’t it tried before and failed?

It was, and it failed because the infrastructure didn’t exist and there wasn’t enough investment to create it. Plans were subsequently shelved and attention turned elsewhere. Increasing environmental awareness and growing concerns over climate change has focused the world’s attention on more sustainable means of travel, among other transformations.

The Commission has also initiated its Clean Aviation programme, which hints at two different demonstrations of hydrogen-powered aircraft.

On a national level, the French government is providing €1.5bn in support of Airbus’ plan to develop commerciallyviable zero emissions aircraft, which includes research to develop the use of hydrogen for fuel.

The likes of Bill Gates and Jeff Bezos are investing tens of millions of dollars into producing cheap green hydrogen through their foundations. There is also a boom happening around sustainability-driven venture capital money, more generally.

Momentum around hydrogen looks to be accelerating year on year. The need is clear, technology solutions have reached a high enough level of maturity and investment capital is available.

Surely hydrogen alone isn’t a panacea for air travel to continue as it has done?

Ultimately, though, the change may be driven by individuals rather than manufacturers. Should we revert to travelling in shorter hops rather than one long, single journey? The question then becomes, are we happy to accommodate a few additional hours of flight time and airport transfers? Are we willing to sacrifice convenience for climate change?

Airbus is working to deliver the world’s first zero-emission commercial aircraft by 2035, with hydrogen propulsion helping
deliver on this ambition. Image courtesy of Airbus.

The UK aerospace industry is one of the best in the world. Is enough being done to maintain this position should a shift to hydrogen occur?

We’re certainly late to the table in terms of infrastructure investment. That being said, there are multiple activities underway nationwide.

Examples include the Hydrogen to Humber Saltend [H2H Saltend] project, which is building one of the world’s first atscale facilities to produce hydrogen from natural gas.

Project Fresson, led by Cranfield Aerospace Solutions, is working to develop hydrogen fuel cell-powered aircraft with wing-mounted fuel tanks. The first flight is planned for 2022 and entry into service by 2024, Loganair intends to use them for flights in and around the Orkney Islands.

Indeed, Kirkwall Airport on the Orkney Islands is running a green hydrogen project to decarbonise its heat and power.

Brexit actually provides the UK with the ability to own this space over and above the US certainly, and Europe to some degree. Being out of European Union Aviation Safety Agency (EASA) control offers the UK the opportunity to define a standard for hydrogen. In doing so, we would remove one of the biggest impediments to progress. 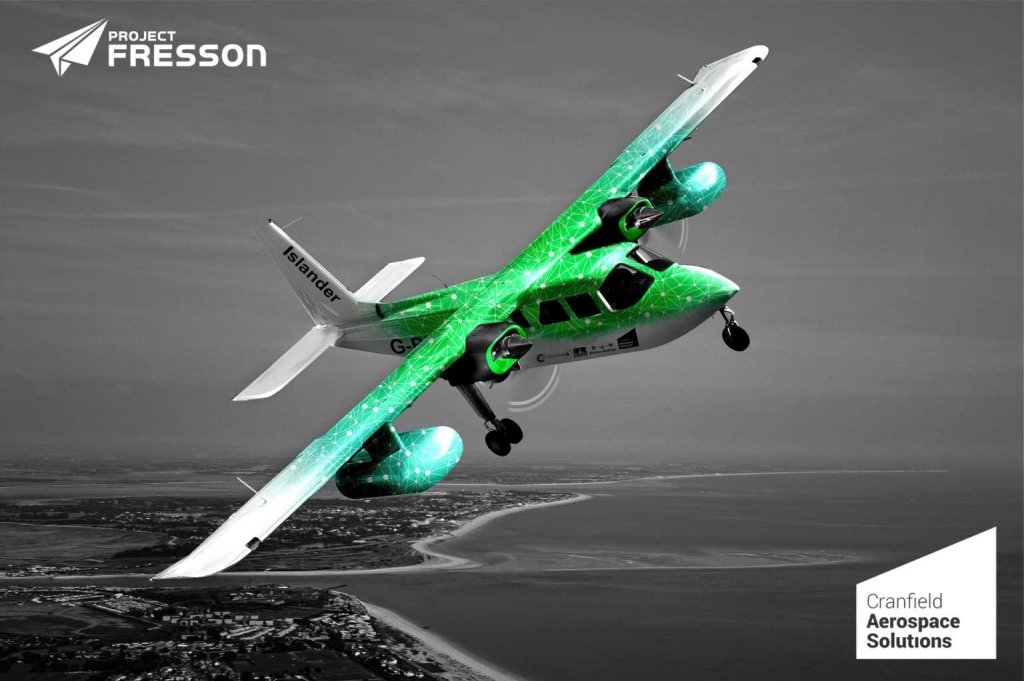 So far, we’ve discussed hydrogen as a fuel source. What are your thoughts on sourcing it in the first place?

Hydrogen is abundantly available because producing it is just a case of using electricity to split water (H20) into hydrogen (H2) and oxygen (O2), a process called electrolysis.

I say ‘just’, electrolysis is the most energy intensive part of the process. Renewable energy sources, however, are doing much to bring energy cost down; as well as being better for the environment compared to traditional forms of electricity production.

The UAE is using readily accessible and cheap solar power to produce green hydrogen on tap. Given the UK’s growth and expertise in offshore and onshore wind power, that thinking could certainly be replicated here.

The UK has the potential to generate the cheapest green hydrogen in Europe. This potential is attracting significant investment, from ITM Power’s new gigafactory in Sheffield and Ørsted’s development of the world’s largest offshore wind farm in Yorkshire, to the National Centre for Propulsion and Power at the University of Cambridge’s Whittle Laboratory, which is due to open in 2023. 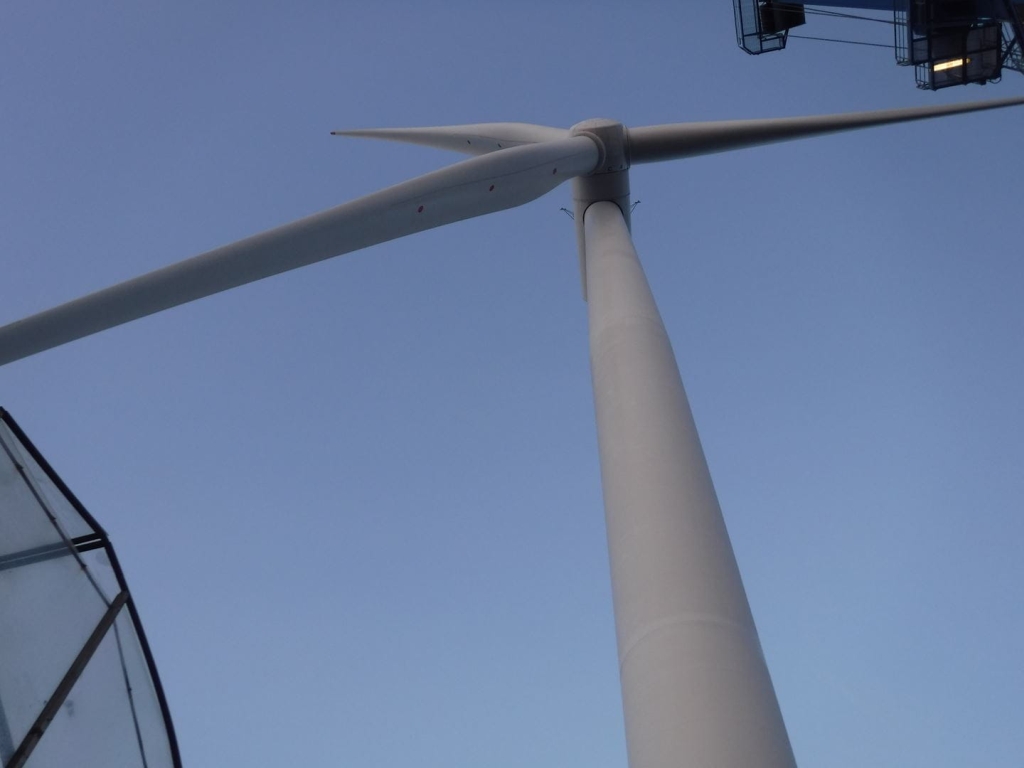 In May 2021, the first turbine at what will be the world’s largest offshore wind farm was installed at Hornsea Two, 50 miles off the Yorkshire coast. Image courtyes of ØRSTED.

If the UK truly wants to ‘build back better’ and greener, however, we must think beyond aircraft. There’s an opportunity here for hydrogen to potentially fuel every form of airport transport.

Could Heathrow become a net zero hydrogen-powered hub for buses, trains, aircraft, even for combined heating and power? In doing so, you build an economy around the airfield which would create jobs and pull in further investment and development.

What’s stopping us from doing exactly that?

Clarity. We should have had a hydrogen strategy off the back of the government’s Ten Point Plan for a Green Industrial Revolution back in January. Publication of that strategy was delayed to March, then to June and it’s now expected towards the end of July.

If there was a policy that said the UK was heading towards this fuel in this timeline, like we’re doing with diesel vehicles, then the money would follow. But today, with competing options on the table, investing money is akin to playing roulette.

A lack of relevant skills is also challenging. Graduates with experience in hydrogen, cryogenics and fuel cells are in short supply and are increasingly lured overseas to better funded research posts or better paid jobs.

We must work harder to retain these individuals. VentilatorChallengeUK was so successful because we quickly recognised what was happening, we identified the solution, we assembled the right team and then activated them in a way that had never been done before. We need to apply the exact same ethos to sustainable aviation. 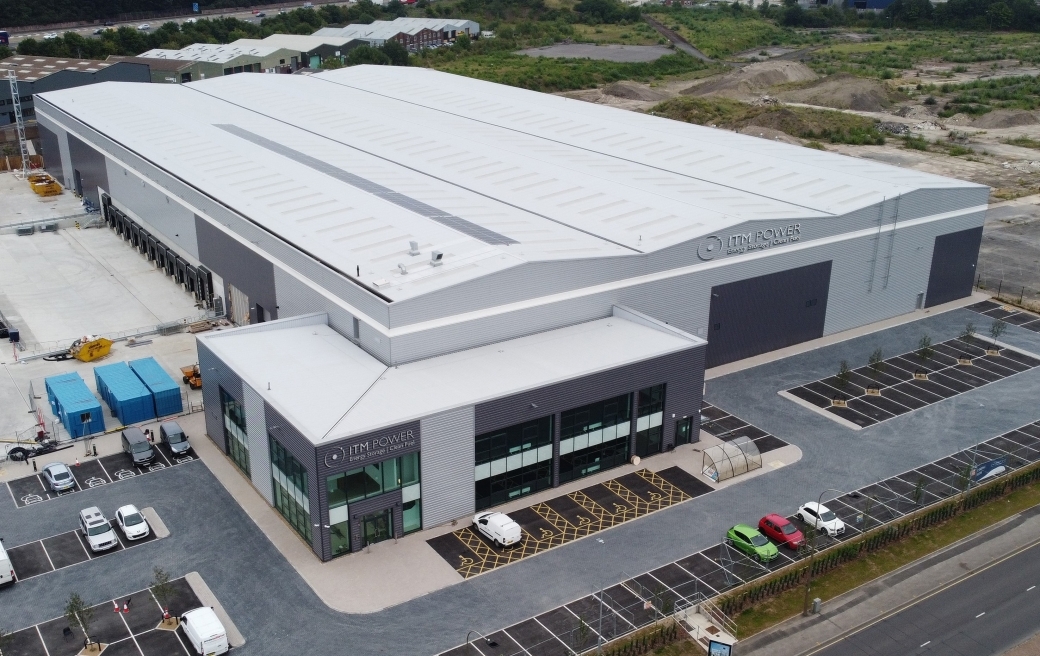 The recently-opened Sheffield Gigafactory is home to a high capacity, semi-automated electrolyser manufacturing facility and a Hydrogen Academy to train apprentices and local engineers. Image courtyes of ITM POWER.

Having been heavily involved in VentilatorChallengeUK and its success, what lessons do you think can be applied here?

Start now or risk losing out to others. Recognise that this is going to happen much faster than you believe it will. VentilatorChallengeUK needed to produce 30,000 units, which seemed an impossible number to reach. Yet, we delivered almost half that, 13,500, in just 12 weeks.

Collaboration is vital. Don’t put boundaries around your organisation and think that you’re in isolation. There are always those doing something that would be possibly complimentary or help accelerate your opportunity to find a solution. Get out there and find those partner companies, universities, start-ups, whoever it might be.

Among other projects, Paul is currently involved in providing custom fit, reusable and comfortable PPE masks safe for medical professionals and qualified to BSI Standards. Learn more by visiting www.mymaskfit.co.uk