Armoured autos in the Great War

With the 100th anniversary of the start of the First World War rapidly approaching TM takes a look at the impact the conflict had on British industry – in particular, automotive manufacturing.

The First World War was the first conflict that had a truly global reach. It was also one of the most deadly with 35 million casualties, of which 14 million were killed.  It was also a war of technology. Of invention.

The science of killing advanced so rapidly during the four years of war that the weapons and tactics employed by the relevant armies, navies and airforces of 1918 were unrecognisable from those that originally went to war in the late summer months of 1914.

In line with his month’s sector focus on the British automotive industry Mr Addington has honed in on the development of the armoured cars and the role they played in the world’s first global conflict.

Many technologies that are now the staple of modern warfare can trace their beginnings back to the First World War; such as the tank, the fighter plane, and the armoured car.

The first recognisable armoured cars started to appear just after the turn of the twentieth century, less than twenty years after the appearance of the first petrol driven vehicles.

Most of the vehicles at this time were nothing more than civilian cars with bits of armour plate bolted to the sides and the roof. They were very bespoke and very experimental in nature, put together using whatever raw materials were to hand. The vast majority of them had normal wheels and ran on normal tyres, only a few Russian vehicles sported half tracks to enable them to go off road.

Not surprisingly, only a small number ever found their way any way near a live battlefield.

As the years rolled by the design and development of armoured cars improved.

They were mostly manufactured by civilian car makers; Rolls Royce, Lanchester and Wolseley were the main producers in Britain with Daimler and Ehrhardt making similar cars in Germany, Peugeot and Renault working in France and Fiat and Lancia in Italy.

The UK plays an important role in the production of several armoured vehicles currently in use by a number of Armed Forces including the British Army.

Around 80% of the Scout SV, for example, is made in the UK under a programme headed by Lockheed Martin but incorporating a large number of suppliers.

The vehicle has won acclaim for its agility over a wide range of terrains thanks to a combination of an extremely powerful 805bhp engine and a 7 wheel-station running gear, incorporating a sophisticated dual-rate suspension.

The Foxhound is a wholly UK made armoured vehicle developed to help protect troops in transit in Afghanistan.

Ricardo’s bespoke engine for Foxhound can be removed and replaced within 30 minutes making the Foxhound a handy piece of equipment for aggressive driving environments.

Early uses of the armoured car, pre-WW1, were intelligence gathering, scouting and reconnaissance, launching fast ambushes and counter-attacks and pursuing a fleeing enemy.

They were most effective in a mobile war, over relatively flat terrain, and did make a number of effective appearances in the early skirmishes of the First World War, before the race to the sea and before the onset of static trench warfare.

Many cars were very heavy with all the armour and often badly underpowered by their primitive engines, traction and grip was poor and these cars were defeated by even the slightest muddy slope in the smashed grounds of the Western Front.  Range Rovers these were definitely not.

The armour wasn’t up to the job either, It was ok with rifle and small arms fire, but didn’t stand a chance against any kind of artillery. Armament was typically a number of light machine guns, but some carried heavier cannons.

It was obvious that further development was needed if armoured cars were going to play any significant part in the war.

Britain, and more specifically the Royal Naval Air Service, led the way in innovation, when they started to request purpose built cars to help with the rescuing shot down pilots and report on the movement of the enemy.

As these journeys became more and more dangerous the need for professionally designed armoured vehicles became ever more urgent. The request for ‘fighting cars’ was given to Rolls Royce and by the end of 1914 the first vehicles arrived in the fighting zone.

Unfortunately by then the Western Front had bogged down into a static war not really suited to mobile vehicles. After the development of tracked tanks in 1916 to overcome the terrain issue, the use of armoured cars was restricted to areas such as Palestine and Mesopotamia where the ground was flatter and they performed a cavalry role of pursuit with great aplomb. It was not until the resumption of a more mobile war in 1918 that the armoured car made an impact on the Western Front.

Despite these obvious limitations each major belligerent got in on the act of producing their own armoured cars, some were fully enclosed with armoured roofs, some were more open to the elements (and enemy bullets) and armament ranged from a single machine gun, to a number of machine guns, up to small caliber cannons.

One of the most competent armoured vehicles was the German Panzerkraftwagen Ehrhardt which boasted an engine that produced 85BHP (compared to the first Rolls-Royce cars which had 50BHP), had a top speed of almost 40mph, could carry a crew of 8-9 over a range of over 150miles and packed 3 machine-guns. 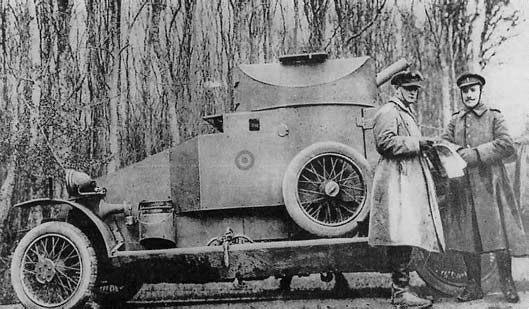 ‘Two armoured cars were ordered forward to cooperate with and assist “A” and “B” Batteries,  which had been instructed to advance towards Bossu. In spite of what appeared to be a favourable opportunity for the employment of mobile forces, the advance of the Armoured Cars and Batteries was completely stopped by a huge Mine Crater…’

Taken from When Your Number’s Up: The Canadian Soldier in the First World War. Logan and Levy. (Toronto: Random House of Canada, 1993)