Autonomous vehicles, so near and yet so far

A highlight of the 2018 Goodwood Festival of Speed was the sight of a 1965 Ford Mustang driving itself autonomously up the famed hill climb with the Duke of Richmond and a BBC TV crew in the back.

In the front, ready to take over in the event of a threat to ducal dignity, was Dr James Brighton, head of the Advanced Mechanical Engineering Centre at Cranfield University.

It was his team that made the Mustang capable of autonomous driving, with the assistance of Siemens UK. Nick Peters caught up with Dr Brighton afterwards.

You’re leaning against a most beautiful motorcar, the 1965 Ford Mustang. Kitted by you and your team at Cranfield to be autonomous. How autonomous is it?

James Brighton: We were given a very specific challenge for this project, and it was to effectively follow a racing line up the Goodwood Hill, and thus to promote careers in this domain, to really enthuse the next generation of engineers by showing them something a little bit different, a little bit unique.

Our students have done most of the control work on it. It’s been a real team effort between the staff at the university, and we’ve done it in a very quick time period as well.

We’ve had about six weeks to turn this around, and the first time it went up the hill with all the systems running was this morning when we opened the festival.

You said it’s programmed to go up the track, so this is not, in the purest sense, an autonomous vehicle.

Yes. This is not the same as the kind of autonomous vehicles that we’re working on in our research domain, in terms of adoption in the public space. Vehicles that have to operate in a public space need to have a much, much greater sense of situational awareness than this does. This is operating on a closed track.

Really, it’s a subset if you like of the autonomy that we would normally see on an autonomous car. But it’s appropriate for this particular task, and it works very well with the embodiment of mechatronics engineering, which is the alliance of the software with the mechanical hardware, in trying to make the system performance as good as we can.

I can understand why young people might say, ‘Wow. That is really exciting,’ and that’s, part of why you did it.

Exactly. We run four MSc courses at the university in my own centre. There are many others. It is a continual challenge to get the very best students into the domain. The manufacturers who they then go on to work for cannot simply get enough of the best quality graduates.

All our graduates would have jobs long before they leave, and very good jobs I have to say. It’s just that the industry is crying out for more. So, the more that we can do to try and help fill that skills gap and keep the UK at the forefront of motor sport and automated engineering, the better – and that is what we’re trying to achieve. 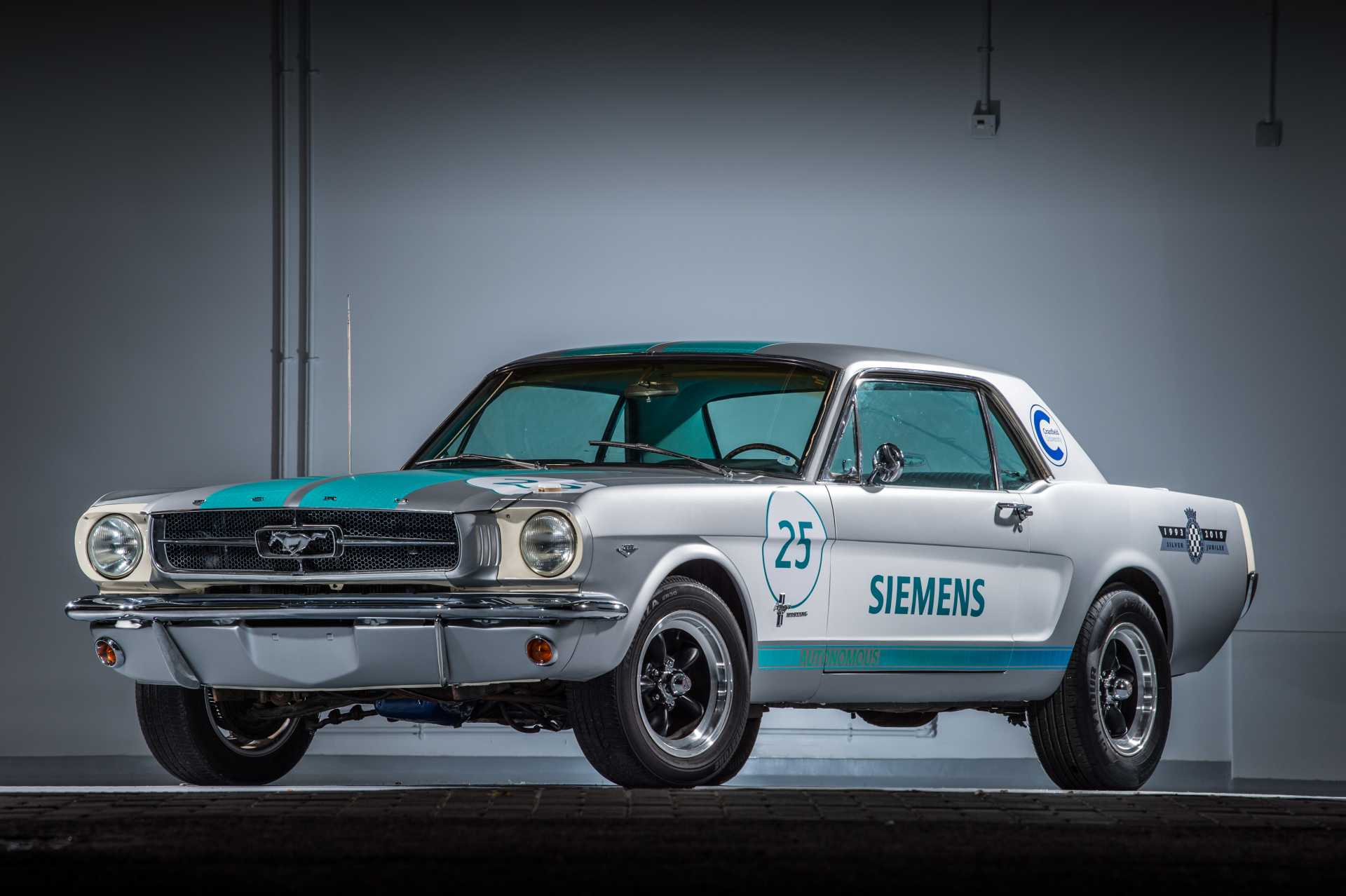 There’s another mission, which is to demonstrate the fact that you don’t have to have a brand-new vehicle or a brand-new factory or a brand-new machine to make it digitally modern. That is important from the point of view of manufacturers who may say well, ‘My kit’s too old, I can’t possibly join the Fourth Industrial Revolution.’ The answer is of course, they can.

They can indeed. It’s a harder technical challenge, but for sure it’s possible.

If we take this car as an example: it’s a 1965 Mustang, it’s done a few miles – nearly 200,000, in fact. When it came from the factory, it was a very good car. But by modern standards, it’s handling is interesting and – curious. It was probably interesting back in the day, now it’s even more curious.

That in itself is quite a challenge, because a modern car has very precise steering and a very precise throttle, so you know what you’re getting. If you put in 10 degrees of steering lock let’s say, you’ll get what you ask for, and that’s reasonably repeatable, within the linear range of the tyres.

With this, it’s not that simple. Trying to keep a 1965 Mustang on any line is not that easy, regardless of whether it’s autonomous or not. So, the control has to work really quite hard to manipulate the vehicle to keep it on a reasonable path.

Are you convinced that we will ever see the day dawn when autonomous vehicles will be on our streets? Or is this a dream that is actually never going to come true?

My personal view – and this is only my personal view – is that we are both very close and very far from autonomy, depending on what your version of autonomy happens to be. If you look at a modern car’s ADAS – the advanced driver assistance system – we are very close to autonomy in certain situations, such as lane guidance. Indeed, you can drive autonomously in some manufacturers’ cars already.

Now, they won’t necessarily operate unsupervised at the moment, but we’re quite close to that. Where there’s a lot of ground to make up is when we’re in much more structured environments, and where we’re in quite challenging environments.

If you consider how you negotiate your vehicle around a cyclist, and you could imagine many different types of cyclists I’m sure, and oncoming traffic when the road is a little too narrow, all of these things create very complex scenarios, and of course what we’re trying to do with autonomy is reduce the burden and increase the traffic density, because ultimately, our roads are too full.

We need to find a way to get people around more efficiently, so in that regard we need to be very careful that the autonomy doesn’t reduce the traffic density, because then we haven’t really achieved one of the major goals of doing it.

And of course, you  need massive buy-in trust from the consumer, and you need government buy-in to actually create the environment where the dream will actually be realised.

Entirely. I think the environment itself is getting there. I think the trust will have a long way to go, necessarily, and in actual fact one of the major areas of research for us at the moment at Cranfield is to look at how humans will interact with the autonomy.

Are you prepared to put a timescale on the dawning of the age of autonomous vehicles as a routine occurrence on our streets?

If I can answer it in a very subtly different way, we’re currently working on a major programme called HumanDrive [see box below] and there will be an autonomous drive next year from Cranfield University up to Sunderland on our roads.

An autonomous vehicle going from Cranfield to Sunderland? On our roads? And the roads won’t be cleared in advance?

So, what you’re telling me is that actually, the technology is here. It’s here and now, give or take a few months, it is all about that trust factor.

And the development of artificial intelligence is also important. How do you ensure that would always make the right decision? That’s a fundamental and very interesting question that people are working on, ourselves included.

The 10-member international consortium behind HumanDrive has an ambitious target; to develop a human-like autonomous driving controller that will traverse a 200+ mile journey across the UK, through live traffic and in natural conditions, by late 2019. This 30-month, £14m project is part-funded by Innovate UK.

The most complex autonomously controlled journey yet attempted in the UK, the HumanDrive project will develop a prototype Connected and Autonomous Vehicle (CAV) with the aim of successfully demonstrating a lengthy end-to-end journey in a variety of settings, including country roads, A-roads and motorways through live traffic and different weather conditions.

Successful completion of this project will take the UK one step closer to having autonomous vehicles on the road, helping the UK government to fulfil its ambition of seeing fully driverless cars on the road by 2021.

CAVs have the potential to significantly improve safety on our roads, reduce pollution and congestion, increase accessibility for vulnerable groups, improve our public transport, support business and the economy, release driver time for other uses, ease the pressure on a stretched transport infrastructure, and improve the transport network across the whole UK (and beyond).

Transport Systems Catapult estimates the UK CAV market to be worth £28bn in 2035, and the Catapult is supporting a range of innovative projects. For UK businesses involved in HumanDrive and other CAV projects, the learnings and exposure will be significant, and will help to maintain the UK’s standing as a leader in this area.

TS Catapult expects 1.1m CAV jobs to be created in the UK (32.2m globally) by 2035. This includes jobs in manufacturing and assembly, research and development, and the indirect supply chain.

Extracted from the HumanDrive case study by Transport Systems Catapult. Learn more at humandrive.co.uk or download the report here: bit.ly/TM-HD-report