Boeing investment in the UK soars

Boeing’s direct employment in the UK grew by 17% between 2012 and 2014, while indirect supply chain employment grew by 38%, according to new research from Oxford Economics.

The UK is Boeing’s largest source of supply in Europe, third globally after the US and Japan, with approximately half of Boeing’s European employees based in the UK.

This growth in employment is expected to continue in 2016, the company’s centenary year, and beyond.

President of Boeing UK & Ireland, Sir Michael Arthur commented: “The prosperous partnership between our country and our company goes from strength to strength.

“The whole Boeing team is committed to the UK, our customers and our partners for the long-term.”

New facilities are opening in 2016 in Frimley, Surrey and Welwyn Garden City, Hertfordshire to support further Boeing’s customers in the UK, Europe and beyond.

Boeing directly employed 1,516 people in the UK in 2014, 17% more than in 2012, the last time this research was carried out by Oxford Economics, and more than it did in any other European country. 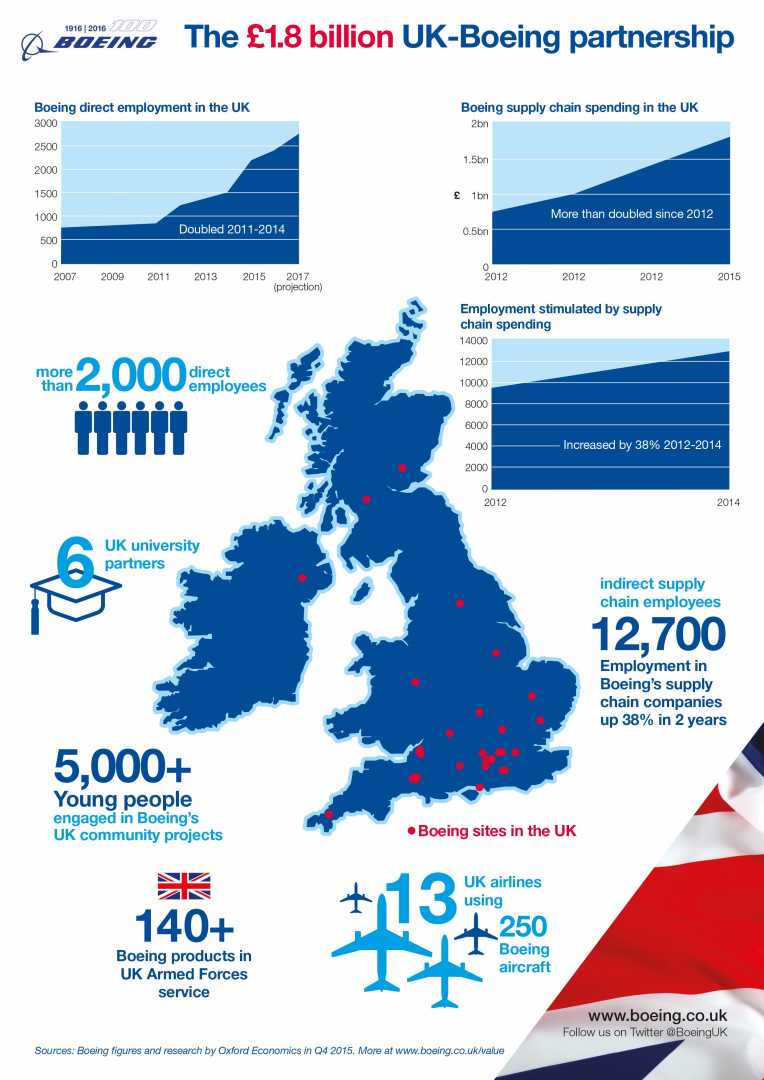 A wide range of UK businesses also benefited from Boeing’s supply chain purchases of inputs of goods and services in 2014.

That includes more than 250 UK suppliers of parts, engines, and engineering services, as well as countless other businesses in those firms’ supply chains.

Boeing spent US $2.2bn (£1.4bn) with UK suppliers in 2014 and the resulting economic activity — including exports — is estimated by Oxford Economics to have supported 12,700 jobs in the UK.

Oxford Economics also estimates that Boeing’s wage payments to staff supported a further 9,500 jobs in the UK in 2014.

Boeing employs more than 2,000 people across the UK at numerous sites, from Glasgow to Gosport, and the company is experiencing solid organic growth.

In 2013, Boeing celebrated 75 years of partnership with the UK; the Armed Forces; British manufacturing, and the air transport industry.