‘Brexit’: state of the union

Posted on 11 Mar 2016 by Victoria Fitzgerald

To leave or not leave, that is the question. Victoria Fitzgerald weighs up the reasons for and against the UK leaving the EU ('Brexit') and the respective implications for the manufacturing sector.

Rumblings of discontentment have been reverberating throughout the political and economic dialogue on the topic of Britain’s place in the European Union for some years now.

Between complaints over complex regulations, restrictive green policies and doubt over the future of the euro; it is not surprising that ‘Brexit’ has been a regular topic of conversation for UK businesses, particularly manufacturers.

However, it is a little shocking that the potential of an EU exit could be a bona fide reality as of June 23, 2016.

So why the sudden urgency for a renegotiation of Britain’s involvement in the European Union?

Following the election of a Tory government in May last year, David Cameron has found himself under increasing pressure to hold the EU referendum that he promised as part of the Conservative Party’s election manifesto. 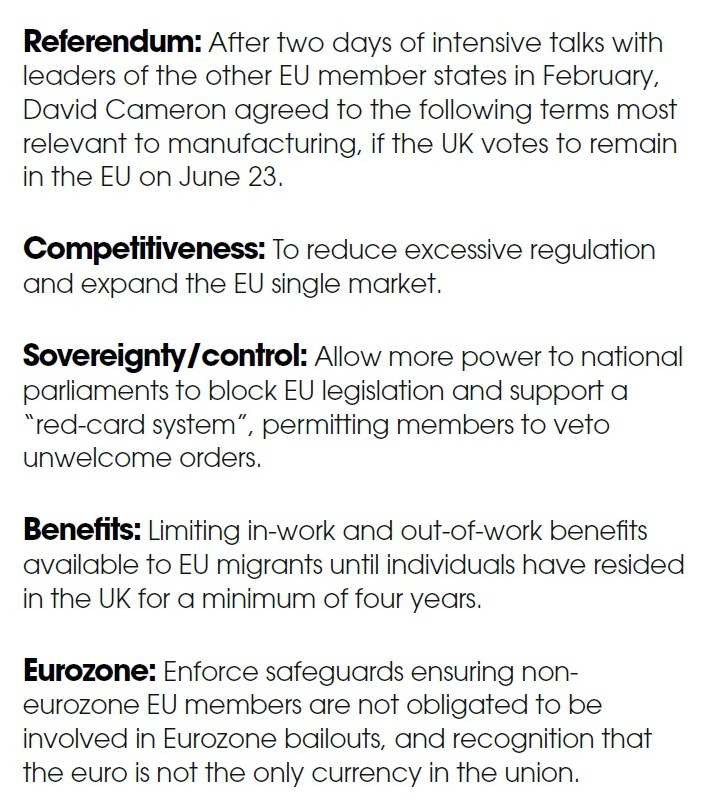 This, coupled with widespread hysteria fuelled by trashy tabloid news outlets over the migrant crisis, has spurred the PM into action.

The parameters of the UK’s demands were thrashed out on February 18 and 19 during two EU Council sessions, as well as the PM meeting with several individual leaders on a one-on-one basis.

On February 20, the nation woke up to the news that there would indeed be a referendum on June 23 2016.

Manufacturing: in or out

Over the past two years, I have heard several viable arguments to both remain in and leave the EU from the manufacturing community.

Comments from a broad range of sectors and businesses of varying sizes, and though their opinions vary, they remain united in their concern over the uncertainty, whatever the outcome, will bring in the future. 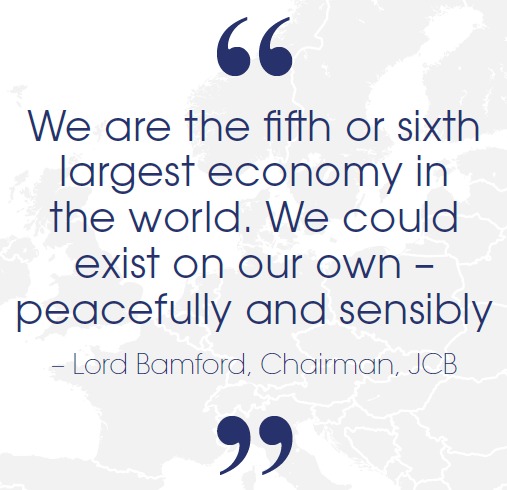 JCB boss and shortlisted TM top 100 2014, Lord Anthony Bamford was forthcoming in his opinion to leave the EU.

He told BBC Midlands in May 2015, “We are the fifth or sixth largest economy in the world. We could exist on our own – peacefully and sensibly.”

And Bamford is supported by his head honcho, Graeme MacDonald, who runs the business.

When probed on whether it would be beneficial to break with an unreformed EU, he said, “I think it would be, because I really don’t think it would make a blind bit of difference to trade with Europe.

“There has been far too much scaremongering about things like jobs. I don’t think it’s in anyone’s interest to stop trade. I don’t think we or Brussels will put up trade barriers.”

MacDonald raises a valid point. One of the main arguments to stay in the EU is to continue easy trade with our main trading partner, however, one would suspect that should the UK leave the EU, trade agreements would be negotiated to eliminate red tape and foster trade throughout. 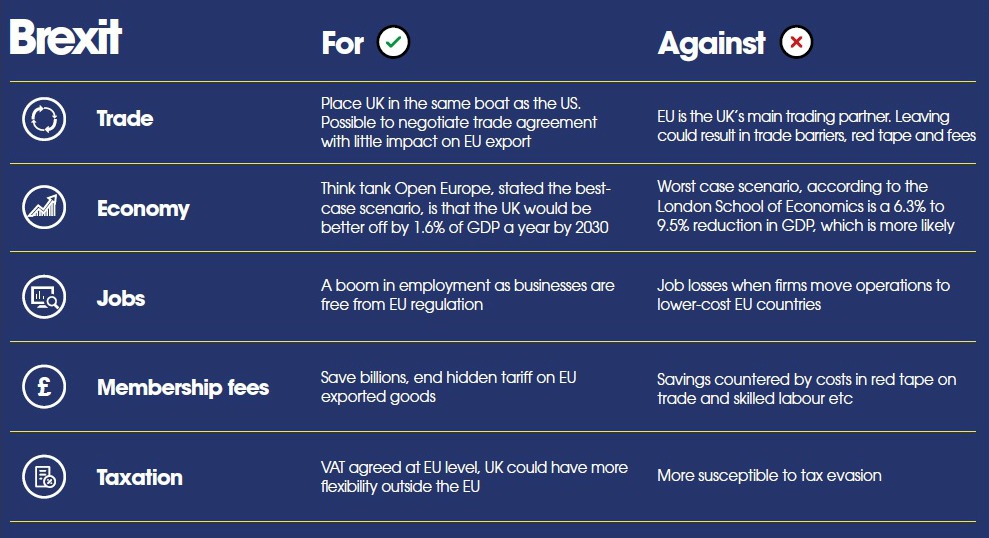 Matthew Eliot, CEO of the Vote Leave campaign, cites the impact the current EU package is having on smaller companies; he said, “When you look at how businesses are divided. Corporate businesses tend to be more pro-EU, perhaps more resistant to change, more focused towards the export side of the economy.

“But many private businesses that support Business for Britain tend to take a longer term view and aren’t held back by shareholders who want a return that quarter.” – Evidently Eliot isn’t tarring JCB be with that brush.

The most predominant argument for leaving the EU is taking back control from Brussels on generic decisions, which are potentially more harmful to some industries than others.

A good example is the UK steel industry. Simon Boyd, Business for Britain, South West regional chairman and director at REIDsteel said, “So long as we’re in the EU we have given away control over key areas of our economy like trade policy.

“This means that we don’t have the powers needed to tackle the dumping of cheap steel on our market. Strict EU rules have restricted and slowed down our government’s ability to respond. If we Vote Leave, we will take back control and get the powers we need to help our struggling industries.”

In addition to the notion of taking back control, issues surrounding migration have ignited extra fervour in the pro Brexit camp, with anti-campaigners believing a ramping up of visa restrictions would create jobs, boost wages and ease the strain on public services.

Contrarily, pro-EU campaigners maintain that the free movement of labour is beneficial to UK economic growth.

The independent Office for Budget Responsibility has stated that Britain is reliant on migrant workers and taxes paid by immigrants to continue subsidising public services.

Not all manufacturers are gunning for a break with Europe. Terry Scuoler, EEF CEO, is a staunch supporter of remaining in the EU, citing exports as a key factor in this; he said, “90% of my member companies export to the EU and they wish to continue to do so. 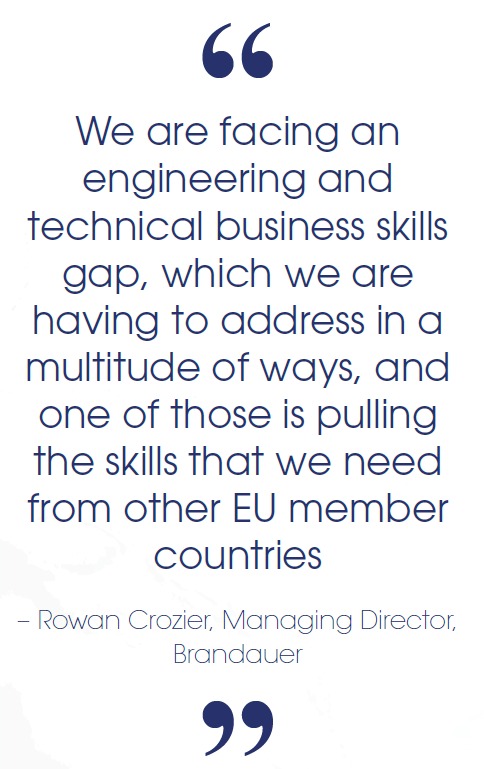 “It’s by far our biggest market and it is a free market of 500 million people.

“It’s very uncertain what life outside the EU might mean for Britain and our economy. It is risky, uncharted territory and all these factors add up to a landscape of considerable uncertainty.”

Rowan Crozier, Brandauer managing director, is another manufacturer that is, as he puts it “very much in” when it comes to the question of Europe and he gave me three fundamental reasons why: skills; trade; and general uncertainty.

He said, “We are facing an engineering and technical business skills gap, which we are having to address in a multitude of ways, and one of those is pulling the skills that we need from other EU member countries.

“A potential restriction in terms of movement of people will affect our ability to recruit those skills outside of the UK.”

Crozier also mentioned his concern for trade, particularly as the business has been targeting trade in the EU over the past four years, “We are being successful in that area, and for me, that might be affected and influence decision making if there’s a partial or full exit from the EU.”

More generally, Crozier is anxious about the “uncertainty”; he elaborated, “This needs to be a swift decision and I am all for a referendum as early as possible, because whatever happens, this is just going to create more uncertainty and that’s not good for anyone’s business.”

Brexit is not a cut-and-dried topic. Whether the nation is coaxed into a “yes” vote, or if Britain decides to “go it alone” with a resounding “no”, the outcome must be swift, so that industry can futureproof their businesses in all eventualities.