British manufacturers punch above their weight

Posted on 8 Nov 2019 by The Manufacturer

Manufacturers often complain they are an underestimated, misunderstood sector of the economy, viewed by government and the wider public as old-fashioned and in decline.

However, not only do they have a great deal to be proud of, they also have a growing and important future as a key element of the nation’s economy. Paul Brooks, Head of Manufacturing at Santander, reports.

Britain’s manufacturing industry could be forgiven for channelling the spirit of Mark Twain, who famously declared, “Rumours of my death have been greatly exaggerated”.

We hear so much about the decline of manufacturing that many Britons think there’s little of it left, but the facts tell a very different story.

This is a growing sector of the economy, investing record sums, creating large numbers of jobs all around the country and competing strongly on the international stage.

Manufacturers certainly face challenges, from the uncertainties of Brexit to the slowing global economy. But the realities of modern British manufacturing and its advanced technologies are completely at odds with perceptions of industries on their last legs.

The figures speak for themselves. Data compiled as part of a partnership between Make UK and Santander reveals that UK manufacturing now accounts for:

To put those statistics into context, the UK is now the ninth largest manufacturing nation in the world. For a country with a relatively small population – we don’t even make the world’s top 20 – and relatively limited natural resources, that’s a remarkable achievement.

Does Brexit threaten this position? Well, it’s true that the UK’s manufacturing exports to the top seven European Union markets are worth £236bn, twice as much as we sell to the US, our single biggest customer.

However, it’s also worth pointing out that the ‘Made in Britain’ success story is a global phenomenon. Manufacturers sell £118bn worth of products every year to the US alone. Asia’s markets are becoming increasingly important, with China alone accounting for £23bn of British exports annually.

Indeed, sales of UK manufactured goods are increasing in markets all around the world: British businesses understand the imperative to exploit the potential of global markets.

As they seek to do so, the diversity and vibrancy of UK manufacturing will be an important advantage. It is led by the transport industry, including automotive, but spans sub-sectors including chemicals and pharmaceuticals, food and drink, machinery, metals, plastics, electronics and electrical equipment.

Each of these areas makes its own important contribution. Indeed, exports have been growing across the board. 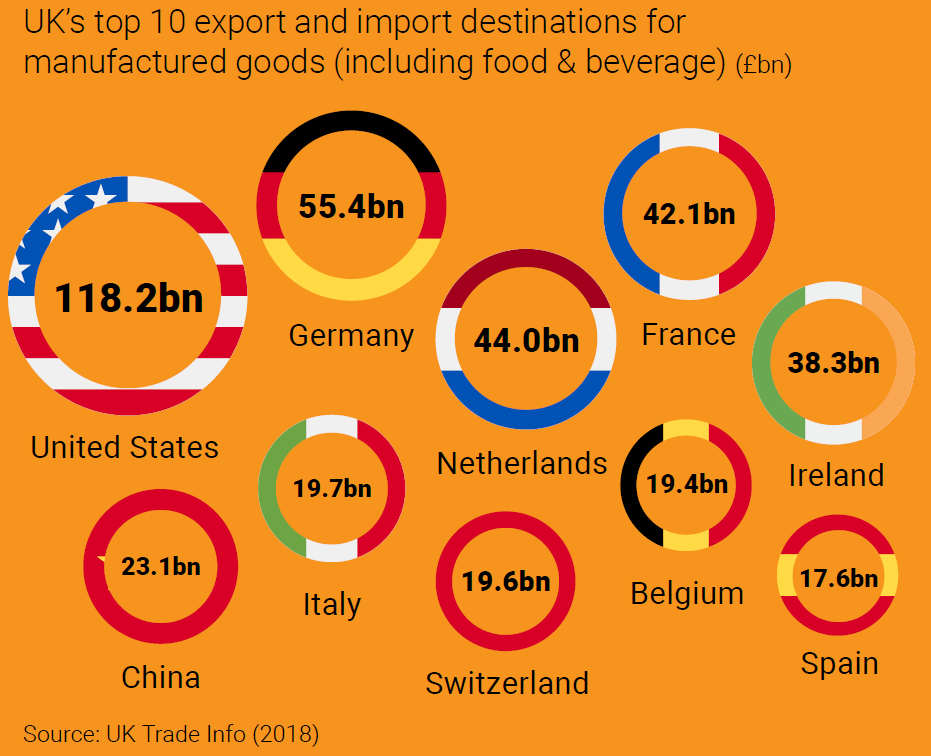 In transport, overseas sales increased by an average of 7.4% a year between 2008 and 2018. Food and drink delivered export growth that was almost as impressive at 5.3% a year. Every sub-sector of manufacturing has seen its exports grow by more than 2% a year over the past decade.

There will be further growth to come from international markets, even in the most challenging areas of manufacturing, but it is also important to reflect on the importance of the sector to the domestic economy.

One crucial point often missed is that manufacturing is a truly nationwide activity. We tend to think of the industry as being concentrated in pockets of the country – the automotive sector in the Midlands, for example – but activity is dispersed to every region of the UK.

The Midlands is certainly an important centre, with 306,000 and 317,000 manufacturing jobs in the East and West of the region respectively, but other areas are crucial too.

There are 350,000 manufacturing jobs in the North West of England, for example, and 308,000 roles in Yorkshire and Humberside. Even in the South East of England (outside London), 277,000 people work in manufacturing.

It’s important not to underestimate the importance of manufacturing as a wealth creation engine across all these areas. The sector underpins the local economies of many towns and regions – not least because manufacturing jobs so often offer more attractive salaries.

Indeed, this has been an important element of the transformation that UK manufacturing has undergone over the past 30 years, becoming a high-skilled industry that increasingly wants to recruit the brightest and most ambitious people.

WHICH SECTORS PAY THE MOST?

In other words, manufacturing is putting its money where its mouth is – and a commitment to people is not the only investment that the industry is making.

UK manufacturers now account for 15% of total business investment – and a remarkable 66% of the country’s research and development spending.

Some sectors have been increasing investment at a phenomenal rate. Electrical equipment businesses, for example, have invested an average of 14.7% more over the past decade; the transport sector has increased investment by 13.9%.

One dividend from this investment has been a step-change in manufacturing productivity in many regions of the country in recent years.

While the UK as a whole has struggled to improve productivity since the financial crisis of a decade ago, many manufacturers have made significant progress, securing important competitive advantage in international markets.

Inevitably, there is plenty more work to do. Britain’s manufacturers do not underestimate the challenges that lie ahead – and they understand the imperative to continue investing for the future.

Nevertheless, it’s crucial that we begin to break down the stereotypes and cliches that have grown up around UK manufacturing.

They deserve our admiration. As for manufacturers themselves, it’s time to be confident. The industry has a bright future, with many strengths and advantages with new product areas and markets around the world to explore.

Santander looks forward to working with many more manufacturers, providing help and support to ensure that even more of the products used around the world are Made in Britain.

Santander is the official banking partner of The Manufacturer MX Awards 2019 – the year’s largest celebration of UK manufacturing.