Budget 2020: R&D tax credits up, but little guidance for the future of UK manufacturing

With the Coronavirus dominating the headlines, it was predicted that big structural issues like industrial strategy would not feature in this Budget, but the Chancellor did have some announcements that will impact our sector.

The Manufacturer’s view of the Budget 2020

“Under the circumstances of the Coronavirus outbreak, and the need to reinforce its credentials as a ‘levelling-up’ government, this Budget appears to have achieved its primary goals, which were to stabilise the economy at a time of national risk and to start investing in the regions outside London and the South East,” said Nick Peters, editorial director of The Manufacturer.

“There are significant investments in R&D and in new, green technology which we support, and other notable spending on exports and skills, but for manufacturing at least it falls short of being a step forward in terms of an evolving industrial strategy. We look to the government to develop a more comprehensive view of our sector in the coming months, and trust that at the spending review and Autumn Statement this clearer picture will emerge.”

The Budget and its impact on UK manufacturing 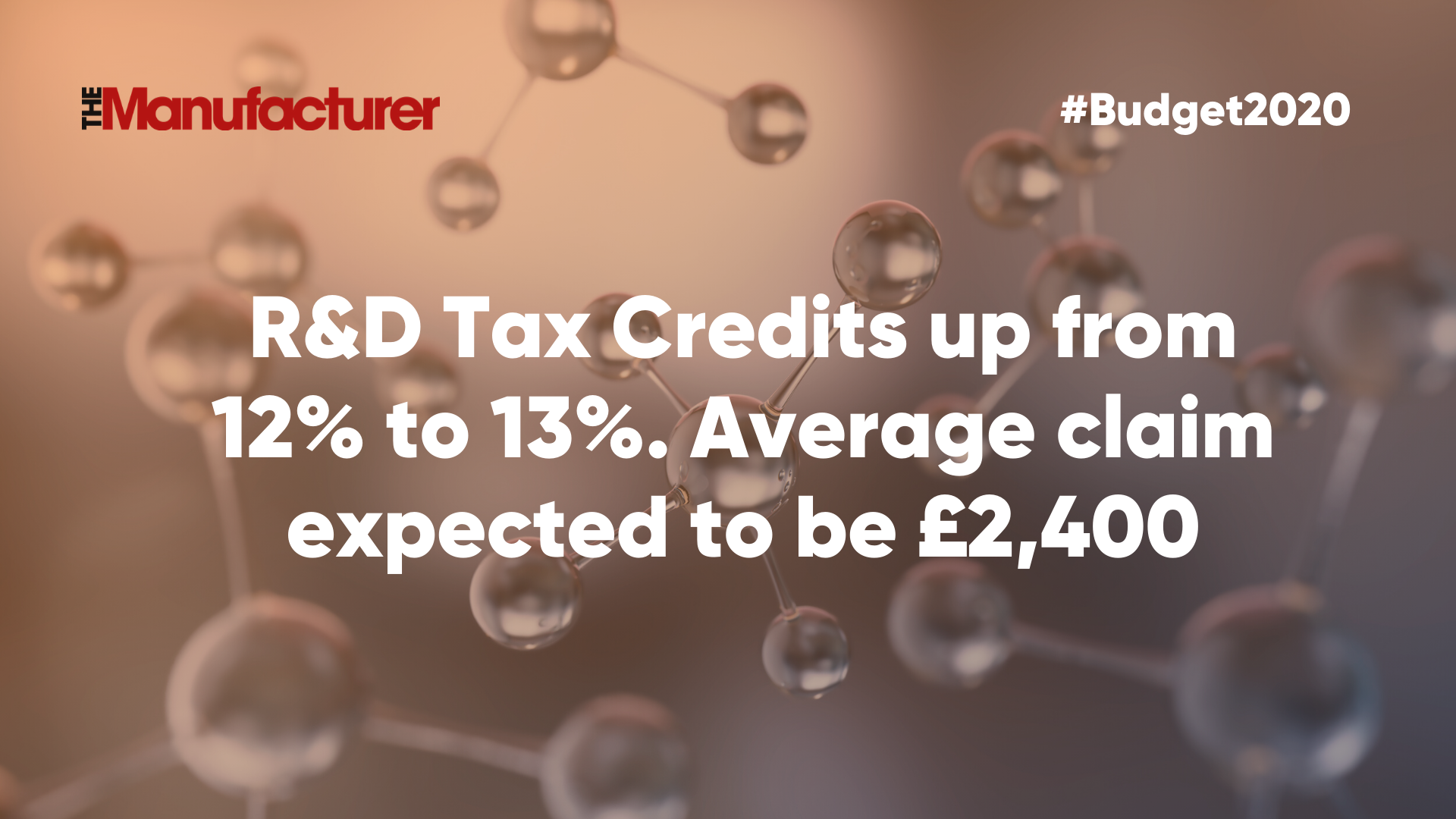 UK manufacturers love R&D tax credits. All the research we have ever done demonstrates that, so today’s announcement by the Chancellor that they’re going up from 12-13% will be welcomed, as will the package of business rates reliefs for smaller business and the emergency support for employers during the Coronavirus outbreak.

So what else will manufacturers celebrate? For those looking for some indication of this government’s attitude to the long-term value of manufacturing to the UK economy, there was not very much. But what there was will raise some cheers.

Major spending on roads and infrastructure, including £5bn funding for gigabit broadband in the remotest 20% of the country and reliable 4G mobile signals in rural areas, mean that overall, means manufacturers will find it easier to operate. 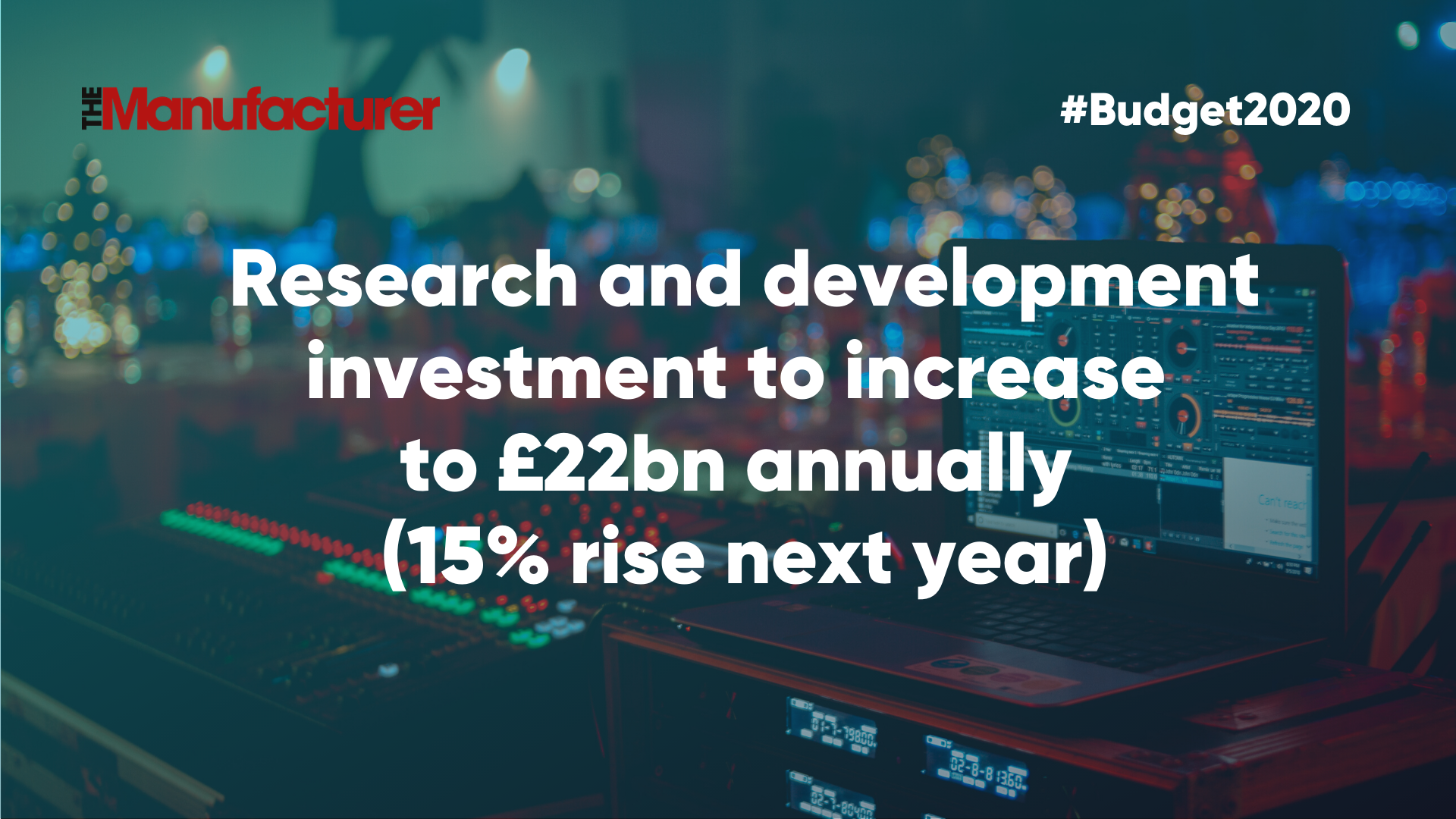 The new government has pledged that by 2027, R&D spend in the UK will rise from 1.7% to 2.4% GDP. This rise in spending is a major step towards achieving that goal.

The government will invest over £900m in nuclear fusion, space, electric vehicles, and life sciences and will invest at least £800m in a new blue-skies research agency, modelled on the US ARPA/DARPA model, which has generated significant innovations and technologies over the years.

Manufacturers who use a lot of energy have something to cheer, according to Geraldine Bolton, chief executive of the Confederation of British Metalforming.

“There were a lot of headline announcements in today’s budget,” she said, “but one significant move for manufacturers that may have been missed is the extension of the Climate Change Agreement (CCA) scheme to 2025. The CCA allows businesses to reduce their Climate Change Levy bill in exchange for meeting targets to improve their energy efficiency and was due to close in 2023.

“Today’s extension gives companies another two years under this scheme and that could well equate to £4m of savings for CBM members every year. This is not just about financial savings, but it also gives manufacturers more time to consider innovative ways to reduce their carbon footprints without the burden of having to pay more taxes.”

Further investment in green initiatives includes the announcement of at least two Carbon Capture and Storage (CCS) sites, one by the mid-2020s, a second by 2030.

This will be supported by the creation of a new CCS Infrastructure Fund of at least £800m, with budgets to be finalised at the spending review later this year. There is also support for at least one CCS power station by 2030, using consumer subsidies for the construction of the UK’s first privately financed gas CCS power station. 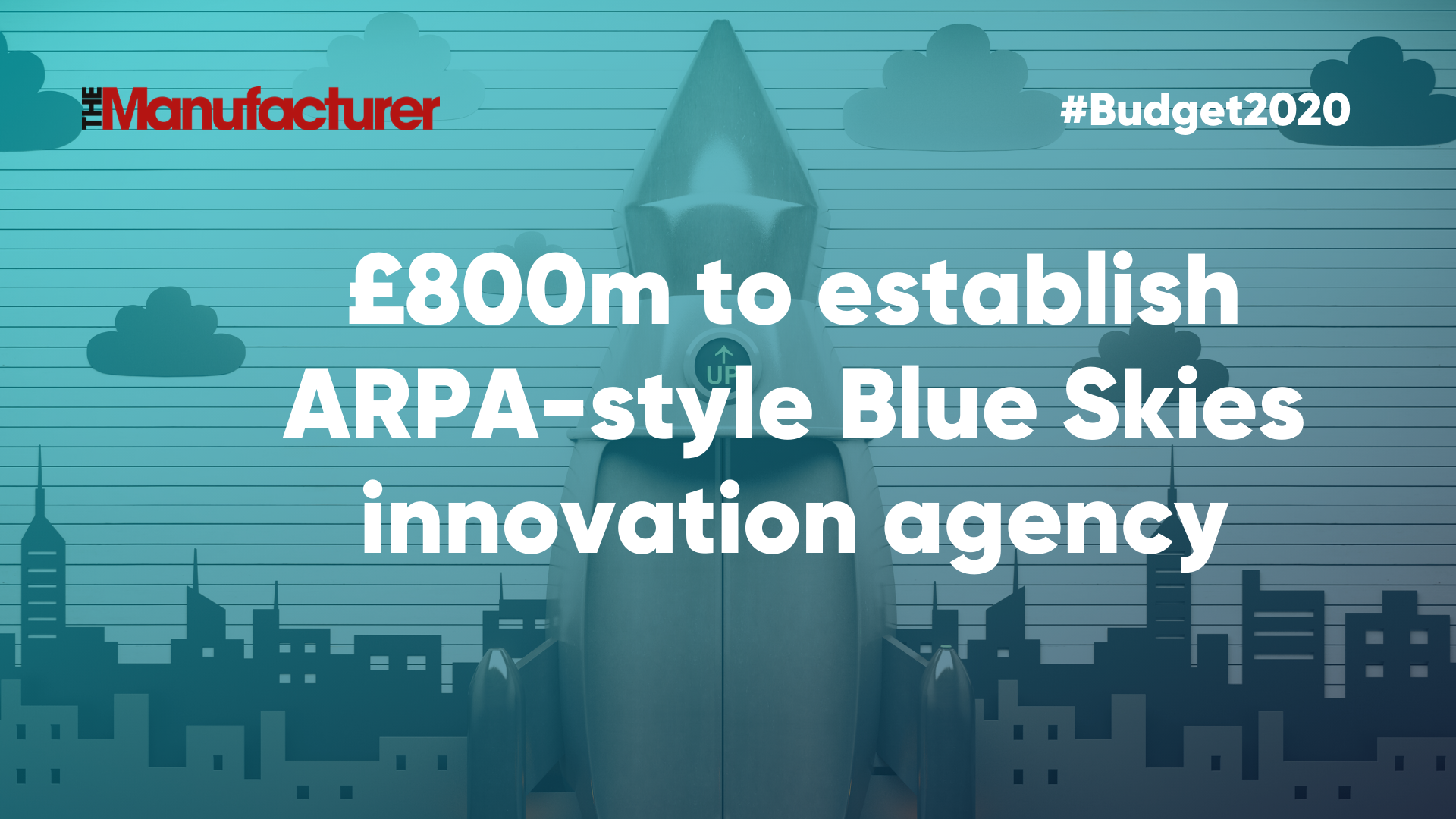 Defence industries will benefit from an additional £100m in R&D funding in response to threats facing the UK, including funding for technology in aviation and space propulsion.

There is also an additional £50m to the National Security Strategic Investment Fund (NSSIF) to make direct investments, alongside private-sector co-investors, into companies with advanced technologies in the national and economic security sector. The British Business Bank will operate NSSIF direct investments through a new government company called British Technology Investments Ltd.

The Materials Processing Institute will receive up to £22m, subject to business case, to support research and innovation in the steel and metals sector. 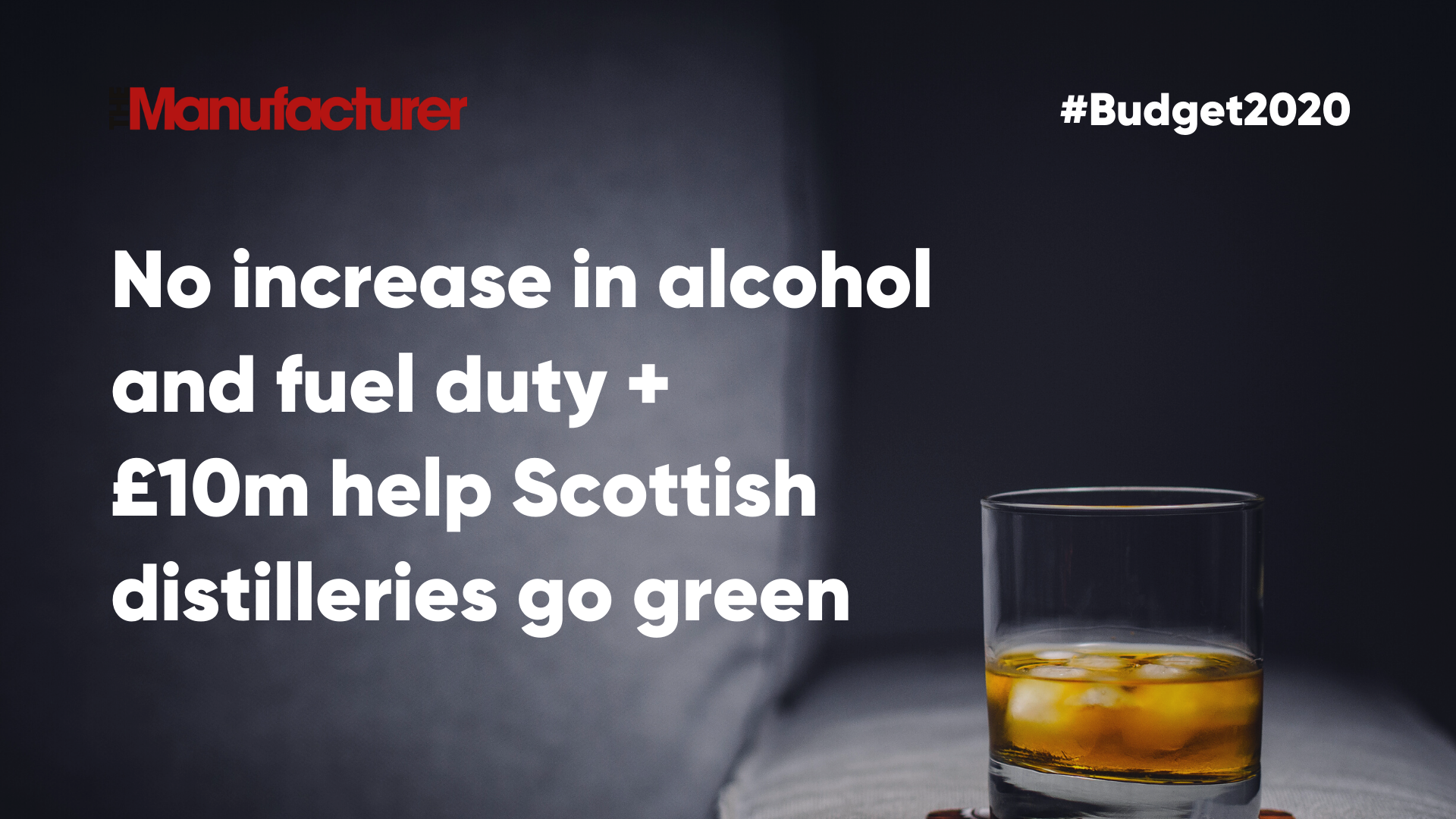 Spirits producers in the UK, particularly the export-generating Scotch whisky industry, are relieved that alcohol taxes remain frozen. Whisky exporters have been hard-hit since October 2019 by targeted trade tariffs by the US, so the Scotch Whisky Association chief executive Karen Betts was pleased by the measure.

“We welcome the fact that excise duty on spirits has been frozen for nearly three years and the Chancellor’s announcement today that excise duty will not rise further.  However, our industry needs continued support, through the upcoming review of UK alcohol taxation and while our exports remain subject to US tariffs.”

They will also benefit from a £10m R&D grant to help decarbonise UK distilleries, including the whisky sector, while the government will spend £1m promoting Scottish food and drink. 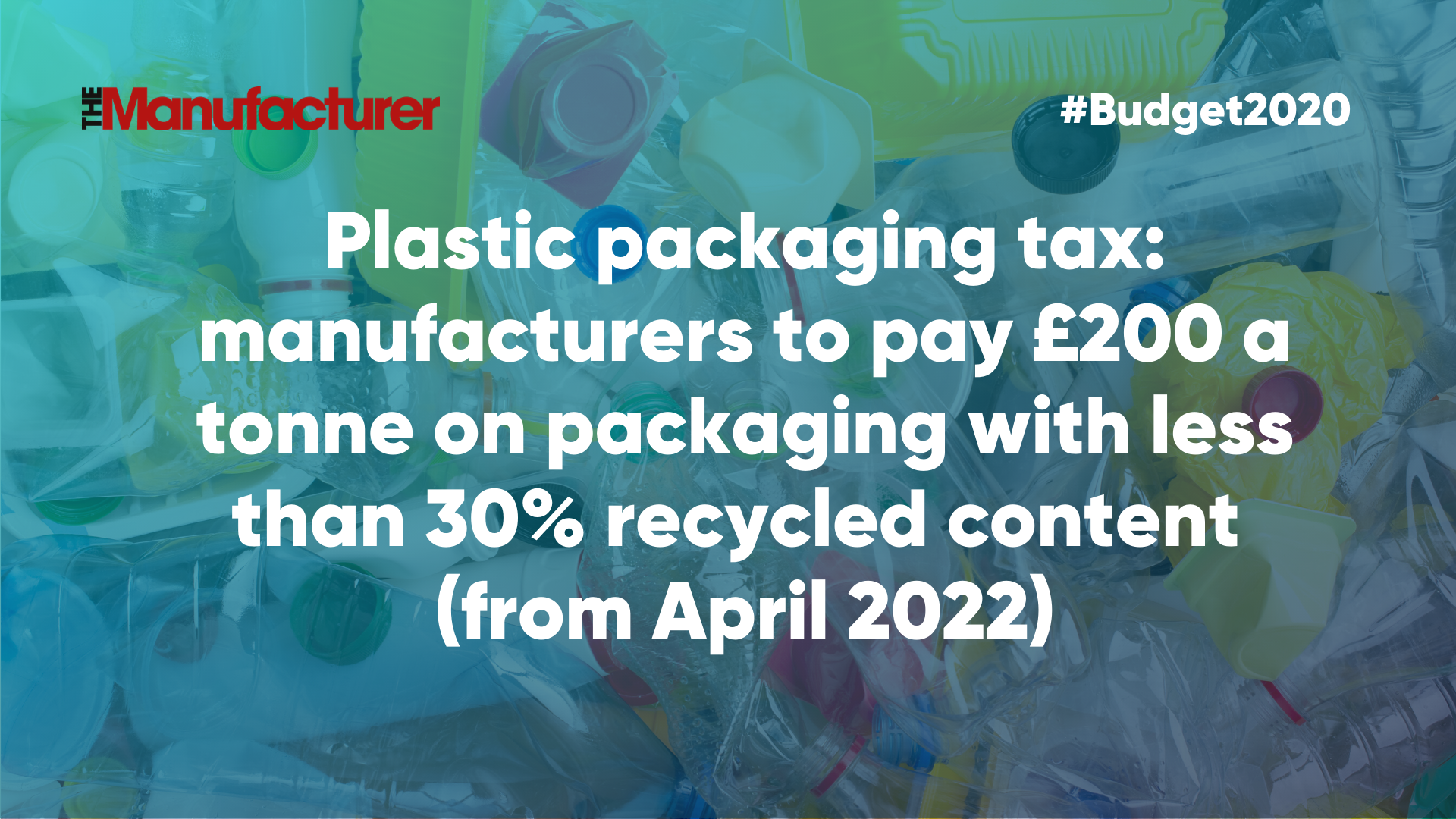 The plastics industry has been expecting the advent of a new tax on non-recyclable plastic since 2018. This Budget makes good on that with a new Plastic Packaging Tax from April 2022 to incentivise the use of recycled plastic in packaging.

It will be applied at a rate of £200 per tonne of manufactured and imported plastic packaging that contains less than 30% recycled plastic. There’ll be a minimum threshold of 10 tonnes of plastic packaging to ensure the smallest businesses are not disproportionately impacted.

Steve Trainor, managing director of UK Extrusion, who supply machinery, including recycling machinery, to the UK packaging industry, said. “This is a positive step to driving manufacturers and consumers towards the ultimate aim of the circular economy. It has been too easy in the past to send our scrap to landfill or export it to low-cost economies instead of dealing with the issue ourselves.

“It will be interesting to see how the policing of this new legislation will be handled by the government.” 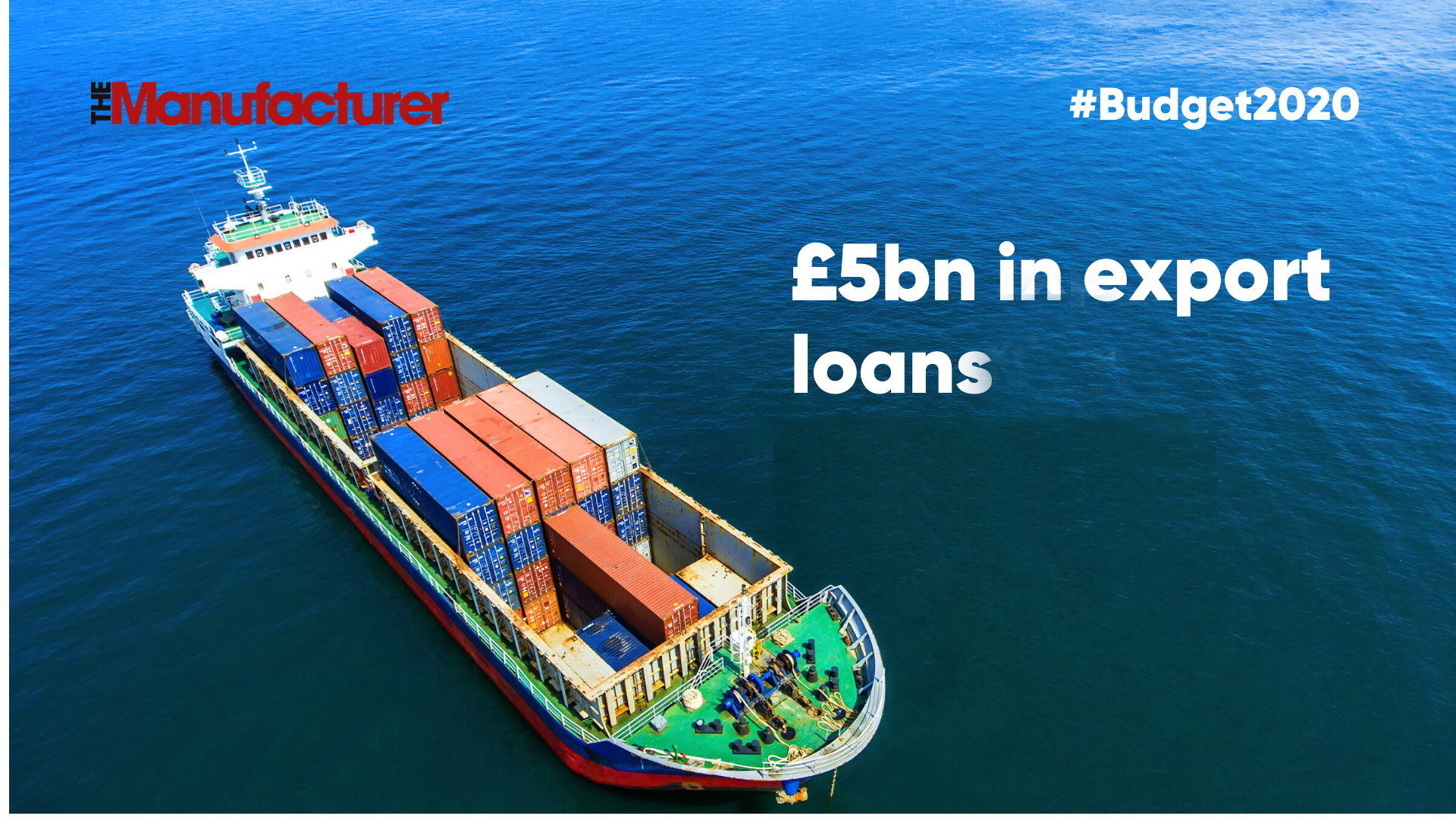 Exporters will cheer the announcement that the £5bn in export loans that was expected to be cut this year will in fact be retained. The loans go to foreign buyers to persuade them to buy British.

There is also a new £2bn lending facility for projects supporting clean growth and a new £1bn to support overseas buyers of UK defence and security goods and services.

The call for government to do more for skills and training appears to be getting through: the government will provide £120m to bring further education and higher education providers in England together with employers to open up to eight new Institutes of Technology.

There is £95m for providers in England to invest in high-quality facilities and industry-standard equipment to support the roll-out of T Levels. The government will also look at how to improve the working of the much-maligned Apprenticeship Levy and says it will ensure that sufficient funding is made available in 2020-21 to support an increase in the number of new high-quality apprenticeships in small and medium-sized businesses.