Posted on 5 Feb 2020 by The Manufacturer

Ensuring that manufacturers are investing in the skills they need to drive their businesses forward is not only critical for their own survival, but for that of the entire UK industry. 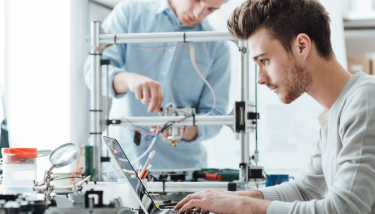 The task for making a career in manufacturing more appealing to a wider spectrum of school leavers and graduates is key to the success of that campaign, requiring a concerted effort by parents, educational bodies, schools and colleges, and the UK government, as well as manufacturing firms themselves.

Significant strides in this area have been made and current data suggests that 76% of UK manufacturers are currently offering digitally skilled apprenticeships, while nearly 70% have outlined plans to spend their training budget on technical engineering programmes, which helps to improve the wider economy.

All good news – but there is still more to do, especially in attracting new talent from state-funded schools and among female graduates.

That’s why case studies from successful school leavers entering the manufacturing sector are so valuable and why The Manufacturer has chosen to champion a handful of cases.

In this first article, 19-year-old George Abbott from Paulton near Bath discusses his Mechanical Engineering apprenticeship at adi Group in Frome, his resistance to the draw of university which he felt wasn’t suitable for his professional aspirations, learning to weld and then using that new skill to build a technology that estimates adi’s material costs, which he designed using CAD.

“I did A-levels at school and had originally wanted to become a golf professional. I was playing a lot and working at the pro shop at the golf club, but after a while I started to realise how difficult it was to build a career in and so decided to look at what else I could do.

“I’d always been interested in finding out how things work and wanted to play a part in something bigger. Engineering interested me because it is all about coming up with something different to what has been done before.

“Everyone at school was pushing me towards university, but I’m much more of a hands-on person, so I’ve always found it hard to learn from PowerPoint slides. I’d done OK at school, but I wasn’t interested in spending four years on something that might not be any use in the future.

“I looked online at apprenticeships and found that because of my A-levels, I could start with a level 3 qualification. I finished that in 12 months and now I’m doing a higher apprenticeship, which will finish at the end of next year.

“I’m mainly office based, but I also do some of the practical side, which includes learning to weld. It means that every day is different which I really like and overall I feel really inspired.

“My apprenticeship is actually quite unique. I don’t think anyone else is working in the region on the same scale as adi. There’s lots of standard manufacturing shops where you can learn to programme machinery, which is what most of the people at my college are doing, but because adi does specialist welding it’s a whole new skill set that I can put on my CV.

“It’s such a shame that schools seem to think the only way into a career is through university…I, for one, am glad I took the time to find out”

“I’ve already learnt so much, especially because I’ve been given a mini-project which will form part of my course work. It’s involved estimating the cost of the materials and drawing it on CAD, and now I’m building it myself using the welding techniques I’ve learned.

“This is my first job in a professional environment and adi have been very good. They’ve given me loads of support both locally and at head office. They have something called an ‘Apprentice Academy’ where all the apprentices across the group get together to learn more about the business, do team building activities, and understand more about opportunities for progression.

“I’d highly recommend an apprenticeship as a route into work. It’s given me the opportunity to progress in a career that I really enjoy and that will take me places. It’s unlocked a lot of doors for me and there are a few routes that I can go down in the future. At the moment I want to become part of the management, running jobs and leading a team. But to go into that it’s really important to understand how things work – otherwise you’re just transferring theoretical information from one place to another.

“It’s such a shame that schools seem to think the only way into a career is through university, and that I had to go out of my way to look at alternatives. But those opportunities are out there, and I, for one, am glad I took the time to find out.”