Posted on 6 Aug 2021 by The Manufacturer

China’s global market share has risen substantially in the past two years, despite calls from developed countries, particularly the United States, for a “decoupling from China”, a new research briefing reveals.

According to global forecasting and quantitative analysis firm Oxford Economics, the recent rise in China’s global market share is driven by gains in developed countries, due in part to the specific nature of the recent expansion of global trade.

However, despite the decoupling calls, China’s exports to developed countries expanded rapidly last year and in the first half of 2021. 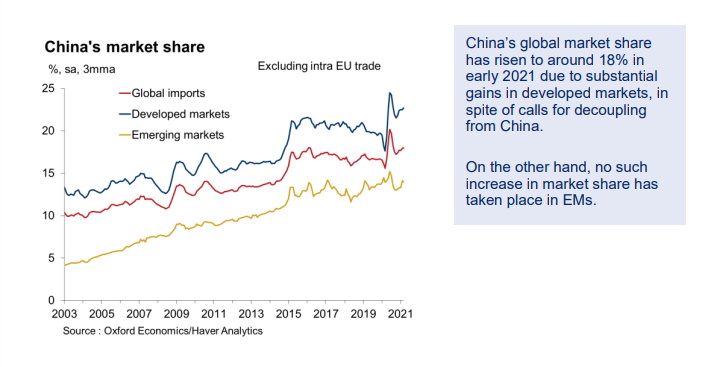 Report author Louis Kuijs, Head of Asian Economics at Oxford Economics, wrote: “while this implies that some of the recent increase in China’s share of the global trade pie will revert, the strong showing of China’s exports to developed countries confirms that there has been little decoupling thus far”.

The analysis showed the gains in developed nations partly came from the recent increase in demand for imports, fuelled by a temporary shift from services consumption to goods consumption and a surge in work-from-home demand.

“In any case, China’s strong export performance since the outbreak of the COVID-19 pandemic underscores that the global supply chains developed in recent decades — and in which China plays a key role — are much ‘stickier’ than many suspected,” said Kuijs.

The report added that the export strength reflected less transitory factors, stressing that “a supportive government has also helped.”

“In its efforts to ‘defend (the country’s) role in global supply chains’, China’s government took measures ranging from cutting fees to helping logistically to get goods to the ports, thus ensuring the availability of products at a time when global supply chains have been under strain,” said Kuijs.

According to China’s official data from the General Administration of Customs of China, trade with its top three trading partners — the Association of Southeast Asian Nations, the European Union, and the United States — maintained sound growth in the first half of 2021, with growth rates standing at 27.8%, 26.7% and 34.6%, respectively.

Kuijs said: “As the global recovery matures and the composition of global demand and imports normalise, some of the recent shifts in relative trade positions will be undone. Nonetheless, the relative strength of China’s exports demonstrates that so far, not much of the decoupling called for by some developed country governments, and expected by observers, has materialised”.