Business intelligence tools are estimated to deliver an £84bn boost to the manufacturing sector. The Manufacturer's IT editor, Malcolm Wheatley reports.

And in a tough competitive environment, such outcomes are hardly insignificant. That said, nor are they unique: time and again manufacturers hear impressive claims for what investments in business intelligence can deliver – claims that in recent times are increasingly linked to big data, predictive analytics, and the Internet of Things (IoT) of course.

No wonder, then, that investments in business intelligence tools allied to big data and IoT are predicted to deliver an £84bn boost to the manufacturing sector between 2015 and 2020, according to recent research by the Centre for Economics and Business Research, which states that big data analytics adoption is set to reach 65% of manufacturing firms by 2020. 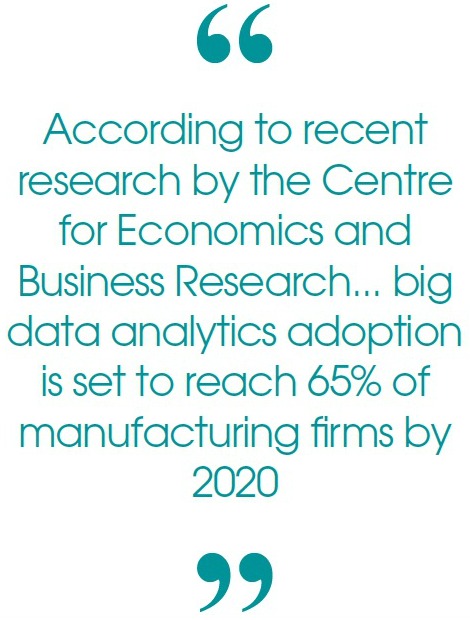 But an important question remains: to what extent are these outcomes truly transformational? Do they deliver sustainable competitive edge? Here, things are more nuanced.

And make no mistake: those returns are on offer. Back in 2012, for instance, an Economist Intelligence Unit report, Fostering a Data Driven Culture, found that 75% of companies which substantially outperformed their peers financially also reported that data analysis was “very important or essential” to their organisations.

But what sort of data analysis? Carried out how, and with what type of software? Will a reporting package deliver the requisite level of business intelligence-based data analysis, or is such a capability simply too basic to deliver anything meaningful?

And if so, at what point along the spectrum towards advanced analytics is a meaningful business intelligence capability found – one that will deliver a transformation in performance?

Talk to those close to the world of business intelligence, and some interesting perspectives on these questions emerge. Tim Clark, industry solution specialist at analytics firm SAS, for instance, points out that basic reporting systems rarely deliver a transformational step change in performance, simply because they’re backward-looking, rather than forward-looking.

“The value of advanced analytics is that it can extrapolate into the future, as well as pull in structured and unstructured extraneous data sources that a reporting solution won’t include,” he observed. “By definition, reporting is historic, whereas manufacturers’ challenges lie in the future.”

Rupert Naylor, senior vice-president at Applied Predictive technologies, agrees. “Manufacturers have hundreds of ideas a year on how to improve their businesses, and they all look good on paper,” he said.

This unique event offers a one of a kind opportunity for you, and your team, to see the premier enterprise software solutions, in one place at the same time!

“But it’s hard to tell in advance which will work and which won’t, and where to focus resources for the biggest impact. Capturing data is always going to be better than not capturing data, but the added value comes from analysing it, not just collecting it.”

Moreover, argued Chris Rothwell, Dynamics business group lead at Microsoft, analysing data can flag up business challenges that a reporting solution might not address – simply because it hasn’t been programmed to report on the issues in question.

That said, reporting solutions still have a role to play, even though their impact may not be as great. Executive dashboards, for example, have done much to make reporting timely and relevant, especially for senior decision-makers, argued Kate Delmitros, senior director of product strategy for supply chain and manufacturing at Birst.

“Our view is that you need both reporting and analytics, and so businesses should go for a solution that offers both,” she explained. “There’s a ‘sweet spot’ between governance and agility, and the reality is that if you don’t have to choose between the two, you shouldn’t.”

“In today’s world, competitive edge arises through the ability to be taking informed decisions based on near real-time data.”

That said, Martyn Williams, managing director of manufacturing execution system and analytics software vendor COPA-DATA, believes IoT is making it easier to take those informed decisions on a whole new set of real-time data – data coming from the factory floor.

Imposing a purely a commercial focus on business intelligence has never made much sense, he argued. “You have to include the data on the factory floor: you can’t just artificially exclude the factory from the value chain,” he said.

“And as more and more manufacturing businesses integrate their factory-based SCADA systems with their commercial ERP systems, there are definite opportunities to seize some very low-hanging fruit, such as using predictive analytics to identify potential equipment failures and the causes of low OEE levels.

“And if that helps a manufacturer to avoid the need to make significant investments in new equipment, then that surely is transformative.”

“Don’t be daunted,” he urged. “Take small, bite-sized steps in the right direction, and build momentum. Business intelligence doesn’t need to be a ‘big bang’.”