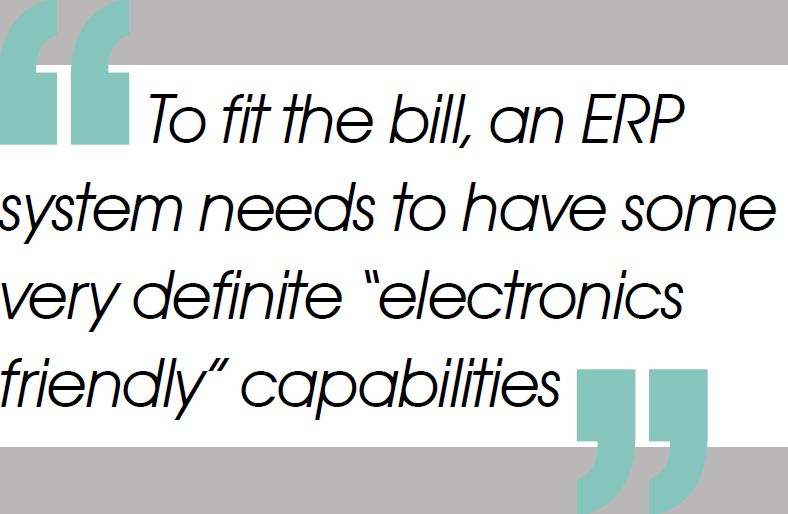 Meanwhile, at AccuSpec Electronics, Infor’s SyteLine ERP solution is being praised for delivering an annual ROI of over 400%, while driving up on-time delivery rates to 94% and reducing inventory by more than 25%.

Nor are such benefits exceptional: routinely, manufacturers invest in ERP for just these very reasons.

For with its roots in the MRPI and MRPII computer systems developed in the 1970s to meet the inventory control and production planning needs of assembly-based industries, delivering such gains very much lies at the heart of ERP’s mission.

Yet while superficially similar to a number of other assembly-based industries, electronics has some subtle differences, differences that are significant enough to prompt electronics manufacturers to add some very specific features and capabilities to their “must have” ERP requirements definitions.

“Time-to-market is a powerful driver: there’s a real need to be able to detect market changes and react to them quickly,” he points out.

“Consequently, ensuring the integrity and consistency of the information within the planning process is very important.”

Phil Lewis, senior director for solutions consulting at Infor, concurs, pointing to a direct link between the pressures faced by the industry and the capabilities that it’s looking for in its ERP systems.

“Compared to some other industries, electronics manufacturers have to be incredibly innovative, incredibly quick to market, and yet operate on razor-thin margins,” he notes.

“And they’re looking to ERP technology to help them address some of those challenges and alleviate some of the pressures.”

“Batch-based pricing—where each batch has a different price—is quite common, as is discount-based pricing based on product volumes, or usage of set levels of components from particular suppliers,” he points out. 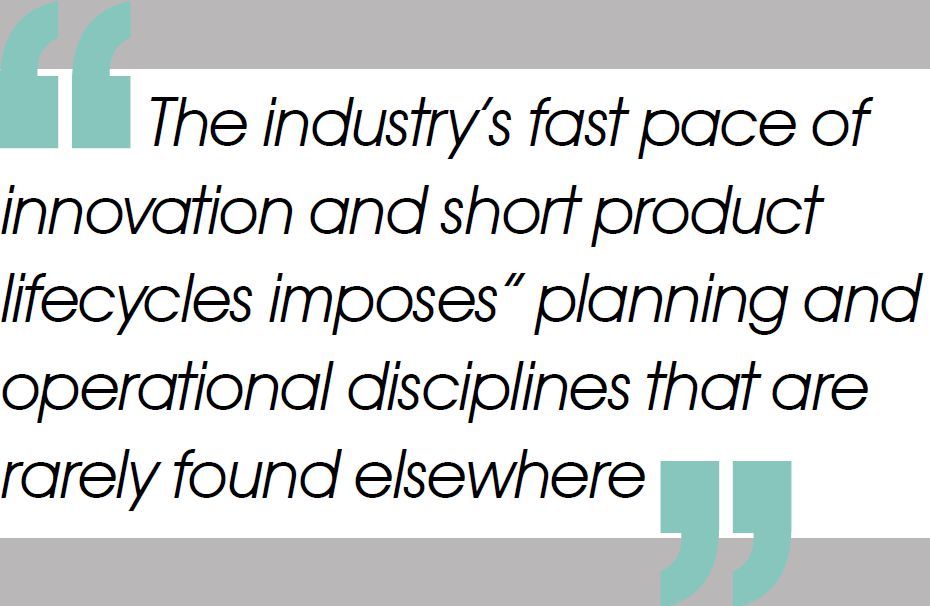 “It’s about negotiating deals with suppliers, back to back with customer orders, and saying ‘We’ll buy a set amount from you, for a period of time.’ In each case, an electronics manufacturer’s ERP system needs to be flexible enough to cope.”

That said, it’s at the operational level that some of the most specific electronics industry requirements occur. To fit the bill, an ERP system needs to have some very definite “electronics friendly” capabilities.

“Every industry has its peculiarities, but electronics certainly has a good number of peculiarities not found elsewhere,” adds Jonathan Orme, sales and marketing manager at Exel Computer Systems.

“Whether it’s testing, or serialisation, or change control, or the high level of order-specific documentation required, electronics manufacturing has some unique characteristics.”

Take the extensive use of “free issue” customer supplied parts, for instance, a practice commonly found in contract electronic manufacturing.

It arises because customers want to exert control over the procurement process, either because they can get better terms than the contract manufacturer, or to protect their own intellectual property, or in order to make sure that very specific components are used.

“The challenge is being able to work effectively alongside free-issue components, without generating confusion.”

Fairly obviously, for instance, free issue components don’t have to be purchased, despite being in a bill of material.

But they do have to be present before manufacture can commence, and accounted for afterwards, with any surplus returned to store for correct disposition—reuse, for instance, or return to customer. So again, ERP must be able to cope.

“Electronics manufacturers put through products hundreds at a time, each densely-populated with components,” he points out.

“Accounting for each of those components individually would be a significant challenge—it’s much easier to say: ‘We’ve built that many finished products, therefore we must have used the components that go into them’, and just backflush, based on the quantities in the bill of materials.”

Similarly, he adds, electronics manufacturers’ approach to Vendor Managed Inventory (VMI) is subtly different from that found elsewhere, in that it tends to be more granular, in part driven by that same back-flushing logic.

“With usage-based VMI, what you see is not manufacturers saying: ‘We have used a reel of capacitors’, but instead saying ‘Based on today’s production, we have used 176 from this reel of capacitors, and that’s the quantity that we will self-invoice you for’,” he explains.

And the industry’s fast pace of innovation isn’t simply taking place at the product level: components, too, are in a constant state of churn.

“Electronics is a strange world, in that the product is always changing,” reflects Infor’s Lewis.

“You’re always bringing in new components, and obsoleting old ones: change management is a huge issue—and again, an electronics manufacturer’s ERP system needs to be able to handle it.”

Along with, of course, the consequent challenge of traceability, and maintaining a correct “as built” record over a product’s lifecycle.

While semiconductor usage may be fairly stable, “as built” usage of other components—capacitors, resistors, diodes and so on—will reflect whatever pricing deals are available, given such components’ generic nature.

Roll it all together, and it’s clear that the electronics industry has pushed ERP vendors to stretch traditional MRPI and MRPII logic in some very interesting directions.

The good news for other— non-electronics—manufacturers is that for the most part, ERP vendors tend to make these capabilities available to all their customers, either on request, or as part of the standard product offering, but disabled in non-electronics environments.

So if—say—back-flushing or differential pricing appeals, it’s probably easier to achieve than you might imagine.