With inflation on prices hitting record highs and impacting the manufacturing sector harder than ever, according to Make UK, many businesses will be taking a long hard and not entirely comfortable look at their finances this calendar year-end.

We understand this uncomfortable task. We’ve been there. As a family-owned business in the north west, and one which manufacturers and supplies bespoke items for the construction sector among others, we know first-hand that the ebbs and flows in business cash flows are often not entirely within your control. However, there are ways we have learned to bridge them.

This lesson was learned the hard way – by having a business which was dragged under thanks to sluggish payments from our customer. Since then, we started over with Fortis six years ago, relying on as little external funding as possible. However, we quickly found our growth was capped at a certain point. The business was frequently encountering 30-day payment terms on contracts – but larger prospects and bigger deals demanded longer payment windows. Given the demands on our work to pay for materials and staff to keep projects ticking over and delivered on time, these bigger delays were often not something Fortis could take on. The gaps in the company finances were just too large and too scary for us to consider.

Enter our accountant, with a bold new suggestion. The business was no stranger to using invoice financing in the past, but we’d had really varying experiences. One provider locked us into a lengthy contract, and then refused to finance any submitted invoices due to their terms. We had to pay a hefty sum to be released from the contract. Another had actually contributed to the collapse of our previous business. So our experiences had been very mixed. But we were told about a new entrant to the market, which wouldn’t demand a long-term contract, allowed us to submit single or multiple invoices, and didn’t charge the sizable percentage of the cash returned back to the business for the privilege. Worth a go, right?

The real benefit when making this decision was that we were pitching for two sizable pieces of business – both coming along with the kinds of payment terms which would have previously had to be negotiated on, or let the business go. Together, the contracts were worth £400,000 – a sizable figure during the rebuild after last year’s COVID hit. This new solution – AREX Markets – allowed us to win both. Testing it on a one-off invoice saw the money back in our bank account in under a day, and with much lower fees than other providers. Previously, other invoice financing businesses could be slow, and needed us to do a lot of legwork in providing information on the customers behind the invoices. AREX Markets do all of this themselves, and in return we get more of our money back in the process.

But better than that, it has let us plan ahead. Instead of being held captive by payment terms, we now have the freedom to release a little or a lot of the money tied up in our invoices, on demand. Bigger contracts are on the table as a result, as well as longer running ones, spanning years instead of mere months. It’s given the company forecasting a certainty that it was never able to consider before as we are freed from constantly having to scope and sell smaller, short-term projects. We can be more confident in the new projects and tenders we are approaching. The business has not only been able to recover after a lean COVID year – we’ve actually doubled our turnover.

Everyone knows that listening to the accountant always provides sound advice. But we wouldn’t be where we are without trying out this new alternative option which was backed by our accountant. Forecasting has more stability thanks to the customers we are able to pursue, and we’re not just bouncing from small job to small job. Instead we’re building something much bigger.

So while price increases at the moment are eye-watering, that year-end look through the books doesn’t have to be as daunting as it may seem. There are new solutions entering the market which can assist with short-term liquidity issues, something which this industry sees frequently. However, better than that, by listening to your accounting advisors and trying something new, it could be the making of a new approach for your business and its future success. 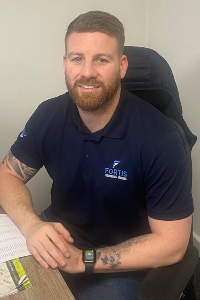 Craig Fletcher is Managing Director of Fortis Engineering, which works with many of the largest manufacturing and processing companies in the UK and Northern Ireland. Fortis is a family business, specialising in Design, Manufacture and Site Installation of a wide range of products in mild steel, stainless steel, aluminium and plastic including pipe work, bespoke fabrication and maintenance.