Posted on 4 Jan 2016 by The Manufacturer

Mike Rigby, head of manufacturing, transport and logistics at Barclays, explores the timely importance of investing in robotics and automation.

UK manufacturing has often been accused of under-investing in robotics and other forms of automation, compared to other developed economies.

In 2012, for example, the UK was ranked 19th worldwide in terms of robot density in the manufacturing sector, placing the UK just above the global average.

More broadly, there has been speculation that this somewhat modest investment could be one factor behind the UK’s weak productivity growth since 2008.

However, new research data from Barclays highlights that British manufacturers may in fact be investing more in automation than previous studies have suggested.

It also shows that there is still room for potential improvement, with the research suggesting that if the UK can stimulate an additional £1.24bn in investment over the next decade, then as a sector, UK manufacturing could produce £60.5bn more in economic output over the same time period.

Below, I will share with you some of the findings from our new research – Future-proofing UK Manufacturing – and also highlight the barriers that need to be addressed to increase investment and unlock the potential value of robotics and automation in the UK.

Our survey found that more than half of British manufacturers say they are investing in automation, something that our research shows could help the sector to grow and produce more in the future.

Yet these British manufacturers also identify a number of barriers that are potentially holding the sector back from more ambitious and transformative investment.

These barriers could explain why a quarter of British firms have not invested in automation or even considered it.

Convincing this quarter of British firms of the merits of investment in automation could be critical to the UK sector’s future.

Obstacles to investment reported by respondents include a lack of internal funds, external grants and other sources of finance. In addition, a quarter of manufacturers say they simply prioritise other capital expenditure projects over automation.

Of course, the uptake of automation isn’t uniform across all sectors. Our study identified that three quarters of companies in heavy industry, medical devices and building products are already utilising some level of automation, in contrast to just a third of businesses involved in printing and packing.

Quantifying the benefits – £60.5bn to be gained 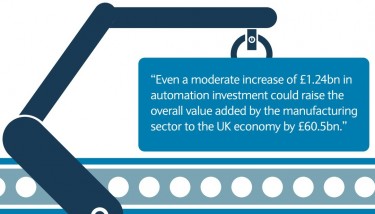 Our economic analysis suggests that even a moderate increase of £1.24bn in automation investment could raise the overall value added by the manufacturing sector to the UK economy by £60.5bn over the next decade, compared to anticipated business-as-usual investment levels.

In addition to the direct effects, accelerated investment in automation and robotics would also have an indirect impact on the supply chain and on the wider economy which could be expected to amount to a further increase in value to the UK of £2.5bn a year by 2020 and £3.9bn a year by 2025.

A moderate increase in investment should be seen as a realistic challenge for UK manufacturing to set itself in an effort to maintain and increase its competitiveness in the global market.

Impact on employment and skills

Such levels of increased automation would not only have a positive impact on output, but would also safeguard UK manufacturing jobs in the future – and should also have a knock-on benefit in creating jobs in other related industries.

This is contrary to the often-held view that increasing automation has a negative effect on employment levels.

In fact, our analysis shows it will go some way to mitigating anticipated future job losses in the sector as a more productive and successful British manufacturing sector will benefit the wider economy, creating new jobs across the manufacturing supply chain – from raw materials to logistics, and also through increased employee spending.

Overcoming the barriers to further investment

Given the clear benefits of automation how can UK manufacturers be encouraged to invest more?

More than a third of companies we spoke to believe there is ‘very little or no support’ available to their business when it comes to automation. For example, it seems many companies want more information from suppliers about the role automation can play in improving their businesses.

While there is help out there, the message from manufacturers is that more can be done by the Government and other interested parties to promote greater awareness of the benefits of automation, and the role it can play in the future success of the country’s manufacturing sector, perhaps through sustained national campaigns.

What is clear is that the UK manufacturing sector is at a critical turning point. However, there is clearly an opportunity for the sector to be more globally competitive through greater investment in automation and robotics.

This will not only benefit the manufacturing sector itself, but the positive ripple effect will be felt across the broader UK economy.

The Automation Advisory Board Thought Leadership Network’s annual conference, Automate UK will provide the opportunity to hear from industry experts not only making the case for automation equipment, but showcasing what is available and what it’s capable of.