The annual report from the German machine tool builders’ association VDW revealed production increased 9% in 2012 to a figure less than €120m short of the record level reached in 2008.

Considering orders increased an incredible 87% in 2010 and the record level reached in 2011, the 2012 drop means orders are still strong for the sector. 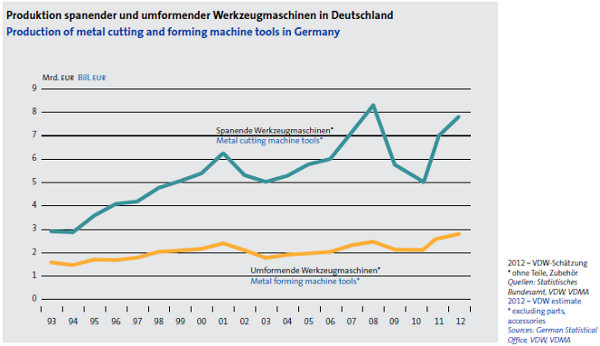 Demand abroad also rose significantly with exports highlighted as a strong driver behind development in the industry. Records were broken when exports reached historic levels with a 20% increase to  An order increase of 45% in 2011 sent numbers to a record level of €9.6bn, supporting increased production.

Emerging countries and China are expected to become increasingly oriented to higher quality products suitable for export, which will offer good opportunities for German manufacturers in future.

America was not to be left out, increasing its share of demand for German machine tool products to 20%.

Imports increased by more than 50% in total over the two year period for 2011/12. A 42% increase in 2011 was supplemented by a 14% rise the following year. This left Germany as the world’s third biggest importer of machine tools after China and the USA. 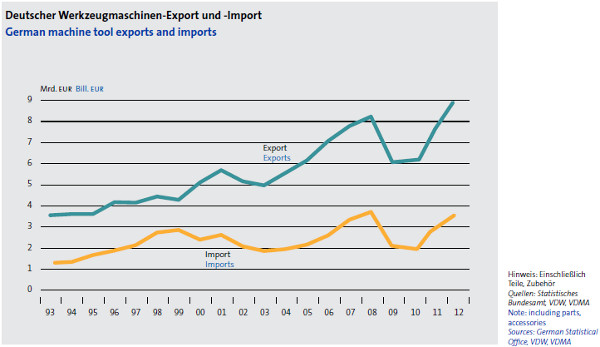 Flat growth is expected for 2013 with VDW expecting growth in production and export of about 1% each. That would allow production levels to reach the all-time record of 2008.

The current year is expected to be one of consolidation after two strong growth years in 2011 and 2012.