The Manufacturer’s Joe Bush speaks to Ken Williamson, COO of PragmatIC Semiconductor, a manufacturer of ultra-thin, flexible and low-cost integrated circuits (ICs) to find out more about the company’s alternative approach to manufacturing.

From TVs to mobile phones, almost everything we own in the modern world contains a silicon chip. Despite this convenience, the environmental impact of these devices depends on how they are manufactured. So, is there a better, more eco-friendly way?

Why does silicon chip production have such a significant environmental impact?

KW: Fundamentally the silicon chip is built into the core of a silicon wafer. Silicon is very dense and it’s a pretty solid substance. So, to get the parts that make up a circuit into the silicon requires a lot of energy. You start with a blank substrate, and to make the core of an integrated circuit, which is basically a process of manufacturing switches, you need to drive the elemental components that make up that switch, into the silicon wafer, which uses a lot of energy.

This process is called ion implantation, and it effectively damages the stability of the silicon. Therefore, to counteract that you need to heat up the silicon wafer approximately 25 times to anneal the damage – and we’re talking about temperatures up to 1,000°C.

However, you also need to make sure that the silicon is clean. If there’s any contamination, the heating process will drive that contamination into the silicon wafer. So, prior to any of the thermal operations, there needs to be a lot of intensive wet cleans, which involves a variety of chemicals and a lot of water. And that water, by definition, needs to be ultra-pure – a process which is expensive and relatively wasteful.

Has this process changed since the invention of the silicon chip?

It has become massively more complex. If we talk about the number of layers that are needed to make a chip, when I graduated, the basic chip that went into watches, calculators etc, required seven imaging layers.

As technology became more complex, and people worked towards faster devices and higher densities – more computing power, less power consumption – the actual chip itself became bigger, so geometries of the switches were shrunk so that more could be squeezed into a given square millimetre.

Modern technology that you would use to manufacture a microprocessor, for example, has 50 photo layers to image that chip. That’s nearly a complexity factor of ten. The equipment that’s required to do this is more complex, more expensive, and it requires more energy.

There are two main environmental contributors at play here – electricity and water – and having the ability to supply the vast amounts of each that are required. The last UK semiconductor factory that I worked in consumed 20MW continuously running, and 220 cubic metres of water per hour. To put that into perspective, a busy household will consume around one cubic metre a day.

How can we rethink the current approach?

To rectify this, we will need a whole new approach towards what we actually need from a technology standpoint, versus what is delivered. If you picture the average laptop, tech companies keep delivering more performance and power. However, this additional capability will only be required by a very small percentage of the community.

For example, my smartphone has five microprocessors, but for most of the day it just sits on standby. It’s very rare that I would use its full capability. It would make sense to me that we need to rethink what we actually need and deliver it through a combination of hardware and software. We need to get out of this cycle that every year or six months the next computer or smartphone must be faster and more powerful.

To get briefly philosophical, we have a society of waste where people regularly throw their phone away even though there’s nothing wrong with it. And so breaking that cycle is a huge challenge which comes down to the end users.

How much of a challenge will it be to implement change?

By making the chips smaller and more complex, you’re driving the never-ending cycle of requiring more energy and cleaner water. Therefore, change needs to happen around electronics that are fit for purpose.

The trouble is a high-performance silicon chip is too low cost. Devices such as phones and laptops need to be costed according to their capabilities. If we were to go down that road, consumers would be less likely to make purchases based around what the device can do, and more around what they need it for. If you can buy a laptop which can perform all the functions you need for £500, why would you spend £1,000 on one with extra capabilities that will sit idle?

That’s a massive freight train to try and redirect. Think about what we see on the TV almost every day, as consumers get targeted (particularly around Christmas), to change their devices to the latest model.

Who should be driving this change?

It’s got to come from global legislation. Water and electricity are too low cost, so there needs to be an offset for high consuming industries. Not to penalise them per se, but to make them pay a fair price for what they’re doing. Industry typically pays less for electricity than domestic users. It shouldn’t be that way.

We have an energy crisis in Britain, and often we need to buy energy from France or Ireland. We pay 17p a kilowatt hour for that, which is more than we charge. That’s absurd.

So having manufacturing pay the true costs of the environmental impact of what they do, needs to be the way forward. But that needs to happen in a global market. We’re living in a world where 80% of our semiconductors are made by companies in Asia, where they don’t have this kind of legislation being pushed on them.

It’s a massive challenge. Our approach has been to reduce energy and water, so that we are sustainable without government support. But we’re pretty much unique in that situation.

How can sustainability of chip manufacturing be maintained when demand is ever-increasing?

There are things that we can do, which are perhaps a little less direct. The semiconductor industry is pretty good around Scope 1 emissions, and we’re very tuned in to not leaking stuff into the environment. Scope 2 is the energy required to make a chip. Manufacturers are reducing this impact as much as possible, while also moving towards more renewable energy sources, to reduce the environmental impact, but fundamentally this is an energy intensive process.

However, by not having manufacturing locally, and not having the complete supply chain within the country, we have been bitten so hard over the last few years through a lack of components, gases and chemicals, and parts to feed the entire supply chain.

For almost any country who uses contract manufacturing – which inevitably means Asia – you have to ship material (which has got a carbon footprint), which then gets shipped back. And then you’re at the time dependent mercy of transportation and customs control.

A silicon chip could be manufactured in a factory in Ireland for example. Those chips then go to the Philippines for test and assembly (as there is no longer any test and assembly capability for volume manufacturing in Europe). And then, if they’ve got appropriate customers, they will distribute from the Philippines directly. Often, however, the chips will come back to a distribution centre. That all adds carbon, time and money to the supply chain.

At PragmatIC we perform our own wafer manufacturing, so we make our own core substrates. We then manufacture the chips, test and assemble them, ready for delivery. And we do that all within the same four walls.

By managing that entire manufacturing supply chain, we can become agile and have the ability to quickly switch to new products and designs, without having to manage six to nine months of inventory. Moving forward, this is very much the idea behind our fab in a box concept.

In the future we will be able to put a small semiconductor manufacturing facility inside an existing factory, meaning the site will only need to hold a couple of weeks of inventory. In 2019, you had to predict your silicon requirements six months in advance, now that’s closer to 18 months, because silicon supply is in such high demand.

So, having to only manage two weeks’ worth of inventory will be mind-blowing. Then, if that factory decides to make a change, because of the agility of our manufacturing technology, it doesn’t take five months to make a semiconductor, it takes three days.

That’s a game-changer – you can become lean, agile and if you see an opportunity to produce a disruptive product you can do so in a couple of weeks, rather than having to plan for it for 18 months. What we do isn’t going to replace silicon, but it opens up a whole new, huge domain where you don’t need a two gigahertz microprocessor, which is many, many applications.

Is the landscape changing?

Bringing manufacturing onshore again and having that supply chain on your doorstep makes sense. It will need governmental support but it should be remembered that offshoring manufacturing is nowhere near as cost effective as it once was. China is effectively beginning to ‘offshore’ themselves.

Products that used to be manufactured in Beijing and Shanghai, are starting to move to poorer, rural inland areas, and away from the more expensive and cost-prohibitive areas of the country. The cost of living in China’s biggest cities is now basically the same as London, and low-cost manufacturing has disappeared.

They’re also beginning to look at countries like Thailand and India, once the infrastructure is in place. So, environmentally all that will happen is that the problem will just be moved around the planet.

What lessons can other manufacturers learn from PragmatIC’s example?

We do not use a silicon substrate every time we make a chip. We basically have a low-cost flexible substrate which is a fraction of the cost of a silicon wafer. We use a carrier to maintain the planarity of the wafer during production, and the carrier gets removed and reused. The manufacturing process then consists of adding material on, rather than putting it into the substrate. Because of this we don’t have the need for these very high energy operations.

Not all applications need the power and performance of the bleeding edge silicon technologies we are producing. Designers need to take a step back and start with the simple question – could this be done just as well more simply? Because not everything needs the performance silicon can offer.

In reality of course, it’s unlikely that the industry will do anything different. Rather, it will try to deal with the current chip crisis by throwing money at it. That’s what’s already happening. New wafer fabs are being put up all the time with vast sums of money behind them.

There’s a wafer fab going into a fairly arid part of the US where they’re talking about moving the nearby town, because there won’t be enough water to serve both. It’s really sad and disheartening, but it is the short-term way of the world just now, which is: ‘we’ve got a capacity crisis, so let’s throw lots of money at it to resolve it’. It needs a completely different way of thinking, and that is what we are pioneering – scalable, modular production of optimised circuit designs.

Find out what other manufacturers are doing to implement and maintain sustainable production. 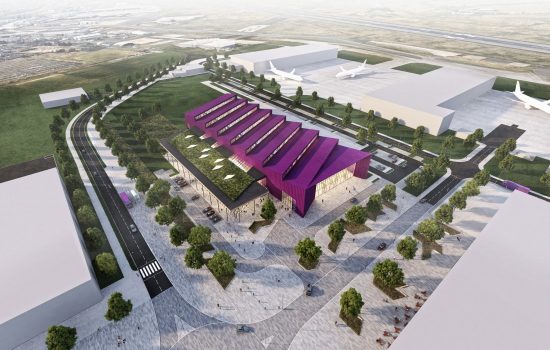