EEF CEO, Terry Scuoler examines Obama’s plans to cut carbon dioxide emissions in the US and how the EU should follow suit when structuring emissions targets in Paris in December.

President Obama’s new plan to force US states to cut the carbon dioxide emitted by their power plants was met with warm words last month, particularly from overseas.

The plan may prove to be a key step in reaching a global deal in the UN climate talks being held in Paris at the end of the year. But whether it can really be described as ambitious is less clear.

In 2030, the US power sector will still be emitting roughly the same amount of carbon dioxide as UK generators do now.

Figures from the US Energy Information Administration, suggest the carbon intensity of the US’s power supply was around 0.6 tonnes of carbon dioxide per megawatt hour in 2005, the peak year for US emissions and baseline it uses for all its climate pledges.

The UK’s electricity sector by comparison currently emits 0.4 tonnes of CO2 equivalent (which includes a small amount of other greenhouse gases) per megawatt hour.

However, the projections drawn up by the Committee on Climate Change see this being cut by 2030.

So why might the US’s role turn out to be so pivotal in Paris? For a start, there’s its share of total global emissions, which still stands at 14% to the EU’s 10%.

There’s also Obama’s ability to get China, the biggest emitter and traditionally keen to use its developing country status to avoid emission targets, on board too.

But some of the power of the US is also in the way it plays the game. In coming back to the table as the prodigal again, it has won far more kudos than the ever virtuous EU.

Meanwhile, other traditional troublemakers like Australia, India and Saudi Arabia are still holding their cards close to their chests.

EEF’s recent position paper on Paris argues that the EU, which negotiates on the UK’s behalf, must be much smarter about how it approaches the talks.

Desperate to get positive outcomes from such negotiations, it is often the one that makes concessions, going further than its original position to get others on board.

It turned up at the last big set of talks in 2009 in Copenhagen, as now, with shiny new targets (then for 2020) but ended up being sidelined entirely.

The EU’s focus for this next set of talks must be on bringing others up to its level as rapidly as possible.

This is important for the climate and for energy-intensive industries like steel trying to compete in global markets but finding the tables increasingly tipped against them.

If EU countries are smart about developing low-carbon technologies, a world with more ambitious climate targets should also bring more export opportunities for their firms along the lines of this £4.5bn UK solar export deal.

As the pledges currently submitted ahead of the talks fall well short of the EU’s level of ambition and are unlikely to improve substantially during the discussions, it is essential a mechanism is agreed not just for reviewing pledges over time, but also ratcheting them up. 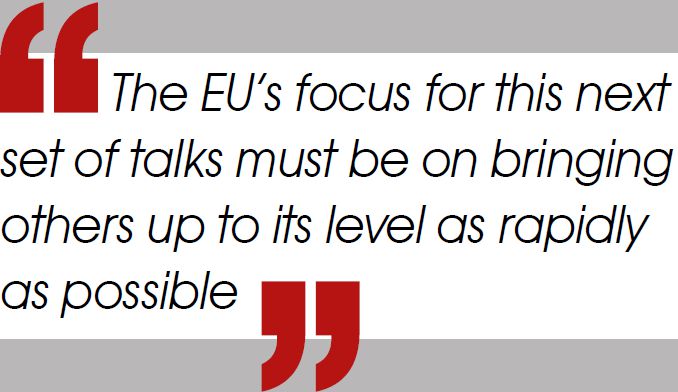 These later discussions are when our own national capacity to help extend the EU’s target, based on our more ambitious domestic goal, should come into play.

Arguably one of the strengths of Obama’s plan and an aspect that is indeed ambitious is its establishment of a structure that, like the UK’s Climate Change Act, can be used to increase ambition over time.

Paris negotiators should aim for the same.