Gripple: get a GRIP!

Posted on 15 Jun 2016 by Victoria Fitzgerald

Gripple doesn’t whinge about the struggles of being a UK manufacturer. It just gets on with it, as Victoria Fitzgerald discovered.

The original Gripple fastener was the brain-child of plucky entrepreneur and wire-salesman Hugh Facey MBE (who also happened to be in the TM Top 100 in 2014).

He devised the product as a response to the challenges posed by existing methods of joining fence wires. In 1988 Facey launched the product in the UK, and three years later Gripple Ltd was born.

A quarter of a century later and operating from three factories (one of which also houses sister company Loadhog), the award-winning Sheffield firm has developed more than 6,500 products for agricultural fencing, trellising and hanger systems; for installing mechanical and electrical services, seismic bracing and geo-synthetic turf mat anchors.

Its products hold together world-famous landmarks like Yankee Stadium in New York; the Atlantis Hotel in Dubai; the Great Dingo Fence in Australia; and Britain’s very own Loyn Bridge in Lancashire.

Since 1988, combined sales of agricultural and construction Gripple fasteners has reached 500 million units, with some 16,000 tonnes of zinc consumed in the process. The company’s 3,900 customers in the construction, agricultural and civils markets are spread across 80 countries and account for 85% of turnover. 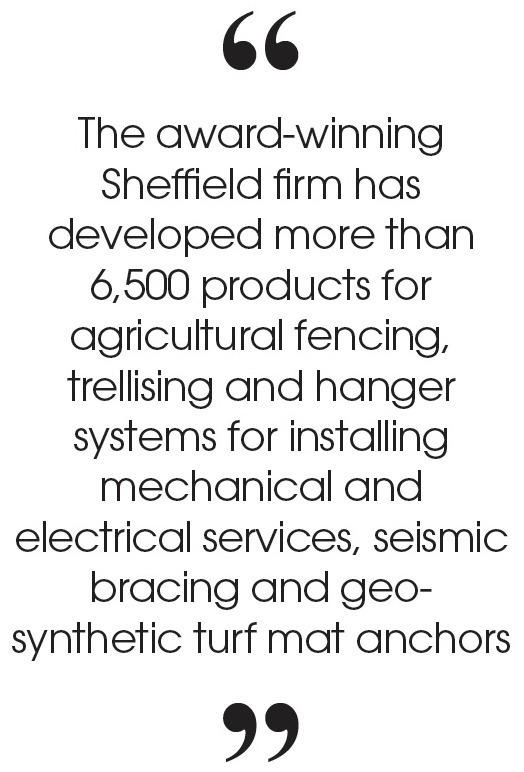 With a track record like that, I had to pay Gripple a visit.

I’d never been to Sheffield before, so naturally I was eager to get precise directions to Gripple HQ from Margaret Laver of Proactive PR, Gripple’s veteran PR guru.

“Taxi drivers will know where Gripple is – there is a huge spider on the wall, which most of them recognised,” she said. I had my doubts, but sure enough, at Sheffield station I supplied the taxi driver with these limited instructions and he got it at once.

After a short drive, the famous spider hove into view; a large metal sculpture clinging to the side of Gripple HQ, held together by those famous wire fastenings.

Gripple is based at The Old West Gun Works, which was as a gun making facility during both world wars. In spite of its age, the main building is the picture of a vibrant, modern factory, with optimised productions lines and a diligent work ethic reinforced repeatedly via visual cues around the site, a trend also seen at Gripple’s Riverside site and at The Hog Works, home to Loadhog, the pallet and container business Gripple owns.

From dazzling works of art incorporating multiple Gripple products to an appropriately placed trombone, deployed when employees have a eureka moment, these are interesting and engaging places to work.

Gordon Macrae, special projects manager at both Gripple and Loadhog, was my guide on a whistle stop tour of all three sites. From the outset it was clear that this is a company driven by innovation, what Macrae called “the beating heart” of the organisation.

“We aim to deliver 25% of our turnover every year from products less than four years old,” he told TM. “There’s a culture ingrained in us to constantly search for new ways of doing things and better ways to serve our customers. Our in-house 10-strong Ideas & Innovation team works to bring ideas to reality in a world class innovation environment.”

During my tour I managed to steal a moment with Ed Stubbs, Gripple’s 33-year-old managing director. He told me that the company’s eternal struggle was for continued growth every year.

It may be a challenge but they are rising to it. In fact, turnover has more than doubled over the last four years to over £48m. The company’s headcount has increased to 453 and its customer base has grown by over 45%. True to its beating heart, the firm has consistently innovated and has now turned its hand to creating automation solutions for other manufacturers.

“Gripple Automation will design and build a machine that meets the individual demands of the customer,” Stubbs said. “They are machines designed, engineered and built by manufacturers. The key to our success is undoubtedly the collaborative work we do with our customers; they are at the heart of everything.”

While quite new, Gripple Automation already has four orders on its books.

In light of this sustained success, it’s not surprising that Gripple has been recognised with a second Queen’s Award for International Trade. (It has three more, two for innovation and one for sustainable development, making it one of the very few to have been honoured across all these sectors.)

“It is fantastic that Gripple has been recognised again for its continued overseas growth,” chairman Hugh Facey said. “Hitting £50m turnover in 2016 will be a milestone as we continue to work onwards and upwards.”

The company is proud of its global supply performance. The company’s manufacturing base in Sheffield, which sources more than 90% of its components from the EU, has increased productivity by 30% since 2010, but such growth would not have been possible without its sales offices in Chicago; Obernai; Sheffield, and now New Delhi, which deliver more than 50 product groups and exemplary customer service to customers on a daily basis.

So what does the future hold for this incredible manufacturing tale?

“The aim is to launch enough additional products to increase turnover by 25%, as well as create more jobs in the sector,” Hugh Facey said.

When I asked him how the firm might achieve this, he replied, “By being open to every opportunity.” Not a bad mantra to live by.