Hit or myth for urban manufacturing?

Are the historic urban manufacturing areas undergoing a renaissance? A combination of incentives, tax allowances, technologies and sheer coincidence might be making it so. Ruari McCallion ventures into the cities.

Britain’s city centres have been revitalised and transformed, in ways that observers of the decline, decay and devastation of the 1970s and 80s could hardly have even dreamed of.

Government Funding – Annual Investment Allowance increased to £500,000 from April 2014 to December 31, 2015. Previously as low as £25,000. Full tax relief for nearly all businesses, including corporations and partnerships/sole traders (but not “mixed partnerships”). Use to help purchase a wide range of plant and equipment. See also Lombard’s Ready, Asset, Go feature.

R&D Tax Credits – A large fund available for IP and R&D. SMEs may benefit from cash fund – see what support is available for urban manufacturing?

Attendees at The Manufacturer Directors’ Conference and Awards presentations at the Birmingham ICC last November walked to and from their hotels through a clean, bright and really rather attractive modern plaza, retail, office and theatre complex that is a world away from the wealth-creating grit, grime and grind of the industrial past.

The city is humming but it no longer resounds to the noise of metal bashing.

But productive industry is not far away and breakthrough technology is bringing it back inside the old city limits. Once upon a time, operations like Ford at Dagenham made everything. They had their own foundries, they cast engine blocks, machined them and even made their own fasteners.

“A lot of that sort of manufacturing has been driven offshore by cost pressures – and a lot of low-value can still be made more cost-effectively overseas,” says Mike Kelly, director of business development for Innovate2Make, which is based at King’s Norton Business Centre – a bit more than a stone’s throw from the ICC – who is happy to talk of his company’s passion to bring manufacturing back to the UK base.

But it is a different kind of manufacturing. In the past, large lumps of metal, such as engine blocks, would be cast and then drilled and machined out; it was ‘reductive’ manufacturing, if you like.

The technology that enables Innovate2Make and other dynamic, smaller companies to compete is additive manufacturing – or 3D printing, as it is widely known. 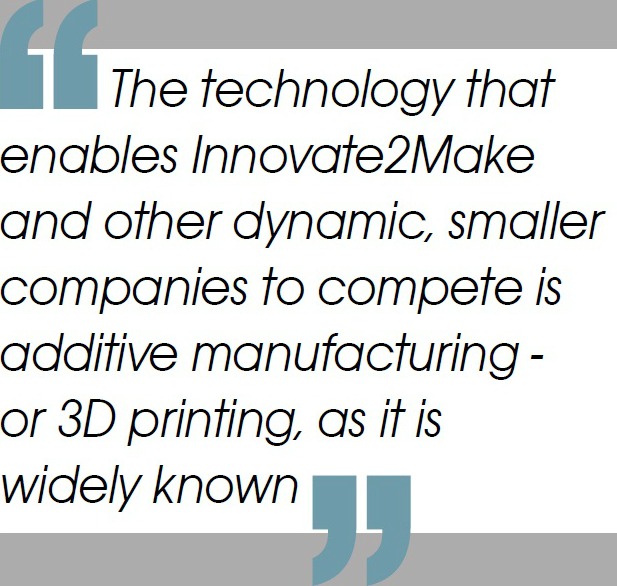 “It’s high-value, complex components that can be effectively manufactured in the UK base,” Kelly maintains.

“Companies have moved from mass production and are seeking to achieve mass customisation.” He mentions the example of a footballer who wants his initials in the upholstery of his Range Rover Evoque, say. That may not be the most widespread – which might be the point for the footballer’s pimped-out ride – but it illustrates at least one possibility.

Another is the 3D printed titanium mountain bike frame that was designed by Empire Cycles of Bolton, Lancs, and engineered and manufactured by Renishaw plc of Wotton-Under-Edge, which is headquartered on the site of a 19th Century woollen mill.

Its ultimate realisation of Empire’s vision is a frame that weighs only 1400g but retains the robustness needed for mountain biking.

The design and construction is claimed to have all the advantages of a pressed steel ‘monocoque’ construction but without the tooling that would be prohibitively expensive for a small manufacturer.

The bike is on show until April 19 at the Manchester Museum of Science & Industry (MOSI), along with more than 500 other 3D printed objects.

The same but different

“3D printing enables that goal of mass customisation,” Kelly says. It is the crucial breakthrough technology, at both ends of the value chain: OEMs and smallest suppliers, from bikes to aircraft, where even a gram saved can make a difference to fuel consumption and economic viability.

Blink Medical has teamed up with Andel Plastics to produce a mould tool that will allow a device used in eye surgery to be made out of plastic instead of ‘traditional’ stainless steel. The ‘Double Ended Marker’ is lighter, safer, and more cost effective to manufacture and the companies claim that it will help to achieve considerable savings for the NHS and health organisations across the rest of the world.

With strategic support from the Manufacturing Advisory Service (MAS), the new partnership will see production of the instrument moving from China to Birmingham, creating three immediate jobs in the process. Sales are expected to approach £100,000 in the first 12 months.

Andel Plastics, based in Tyseley, Birmingham, recently invested nearly £70,000 in a new clean room to assemble specialist instrument packs for the medical sector. It employs 20 people and had a £1.4m t/o in 2014. Blink Medical Ltd, based at Birmingham Business Park, was the UK’s first supplier of single use instruments and customise instrument sets, in 1994. It has a turnover of over £3.2m and employs 18 staff.

If a component can be improved, lightened, made more cheaply, the manufacturers won’t wait for a model change – they will put it on the next plane coming down the line.

“3D printing is the technology that plays into that. It allows a greater degree of complexity in component design and manufacture,” he explains and points out that couple of grams taken out of a seat buckle, for example, may be little on its own – but multiply it by the number of seats in the plane and by the number of miles flown and it adds up to millions of dollars in savings.

It’s a valid point but how does it enable revival of the urban manufacturing base? It’s all a matter of scale, Kelly maintains. “In the old days, a company like Ford would need a huge area of land to house its manufacturing capability.

3D printing is more of a cottage industry,” he says. As an example, he describes his own company’s machine. It is clean, it is small and it can be unmanned. “Last thing at night, before I go to sleep, I can use my iPhone to look at what it’s doing and leave it to get on with it.”

The Innovate2Make factory is small, it is flexible, it is adaptable, and it can undertake rapid prototyping or short run production at a commercial and economic level, for all parties. And it is essential to the revitalisation that he maintains is indeed happening.

Reach out – they’ll be there

“Back in the days of the old, large facilities like Fort Dunlop, people had to come to it, to work and to produce,” Kelly says. “We are now seeing networks of 3D printing operations – in the back garden, in sheds, in garages, in small industrial units – all linked together by the Cloud and providing services from basics to components for aero engines. It is hands-free.

People take 3D drawings, provide the printer with its raw materials – epoxy, plastic, metals, etc. – press a button and off they go, producing components.” The reason it works and is enabling the revitalisation of cities, along with the strengthening of niche manufacturing, is because of its flexibility.

In traditional manufacturing a tool had to be made for the part and it would usually be necessary to commit to production runs of hundreds of thousands of components. 3D printing allows a much higher level of individualisation.

If companies want to change parts rapidly, they can do so. And levels of quality are higher as well. The “democratisation” process that Kelly says it represents means that anyone with space for a 3D printer and access to the Cloud can become a manufacturer.

It offers shorter lead times and logistics channels but also the ability to make complex parts, which would traditionally have required a number of different components brought together, as a single piece.

“A typical large pump, for example, would traditionally have been cast, machined and broken down into several components,” says Kelly. “Using 3D printing enables part count to be cut from 50 to just five. This is what is already happening.