Business and regional bodies have said that improved connectivity can drive productivity growth in the advanced manufacturing sector across much of the UK, according to a new study published by HS2 Ltd.

Drawing on evidence from more than 100 employers, local authorities and universities, HS2: Getting the best out of Britain, highlights the regional strengths of highly skilled manufacturing clusters, universities and research centres, and cutting-edge technology entrepreneurs.

Greater connectivity could contribute to closing the gap between the best and worst performing areas, however, the report – published by HS2 Ltd – warns that more needs to be done to draw them together and realise their full potential in the modern economy.

Comparing London’s highly-efficient transport network with the connectivity that exists within and between city regions in the Midlands and the North, the study argues that there is a direct link between productivity and connectivity.

According to the chairman of HS2 Ltd, David Higgins, the high-speed railway is a “once in a generation opportunity” to join up and amplify the country’s world leading research and development centres and universities; something of particularly timely importance as the UK prepares to formally exit the European Union.

Higgins added that HS2 would offer businesses access to the skills, labour and services they needed to grow – both domestically and globally – and provide a greater contribution to the UK economy.

Secretary of State for Transport, Chris Grayling MP commented: “As Britain’s new railway, HS2 will deliver vital links between some of our country’s biggest cities, driving economic growth and productivity and helping to deliver the government’s Industrial Strategy.

“By bringing our major cities, regions and communities closer together we are encouraging business and innovation and building a Britain that is fit for the future with a stronger economy and fairer society.” 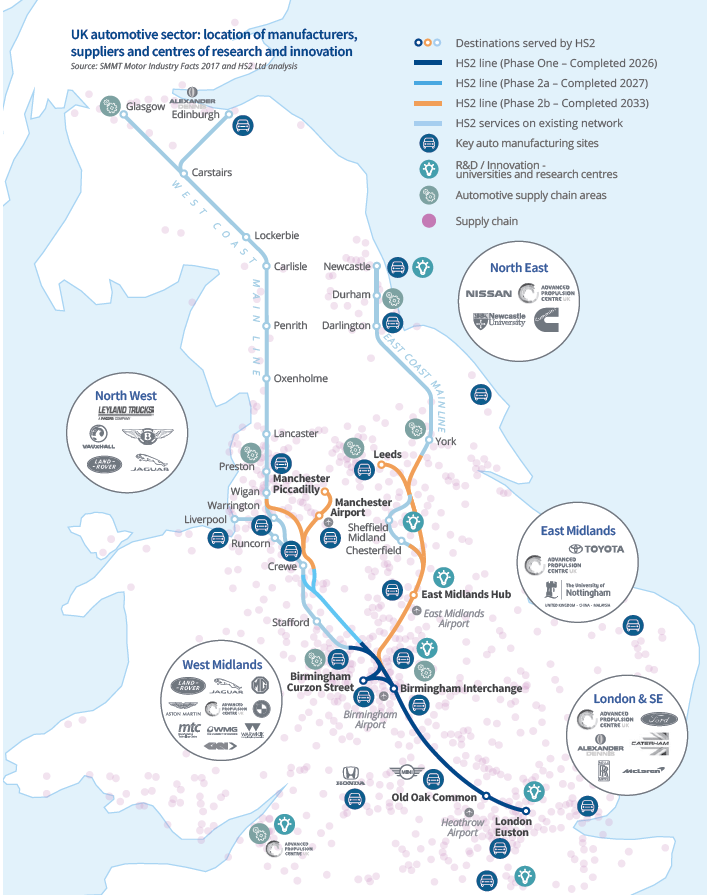 HS2 will reportedly serve around 30m people and directly serve more than 25 stations.

The combination of more capacity and better connectivity is hoped to improve accessibility, and, therefore, productivity in the Midlands and the North – at the same time as easing the pressure on London.

HS2 will enable engineers, researchers, scientists and suppliers to engage in the face-to-face collaboration and sharing of knowledge and ideas that underpins innovation and competitiveness in our advanced manufacturing industries.

One example in Britain’s booming automotive sector is The Digital Engineering and Test Centre, a centre of excellence within the Loughborough University London campus at the Queen Elizabeth Olympic Park.

The Centre is a spoke of the Advanced Propulsion Centre and brings together industry and academia from the automotive and digital communities to work collaboratively to develop next-generation propulsion systems. Automotive manufacturers, including Ford, McLaren, Jaguar Land Rover and Nissan, are affiliated and actively engage with the Centre.

These collaborations place a premium on fast, frequent and reliable transport connections between regions of the UK and HS2 will bring such research centres closer to automotive manufacturing clusters in the Midlands, North West and North East of England.

Marlies Rogait, member of the board for Human Resources for Bentley Motors, said: “Bentley’s headquarters in Crewe is home to the design, R&D, engineering and production of the company’s four model lines which are exported to 60 markets around the world.

“Infrastructure investments such as HS2 will bring improved connectivity to the region, with the rest of UK and worldwide, which we hope will attract suppliers and the best talent to support our business in the future.” 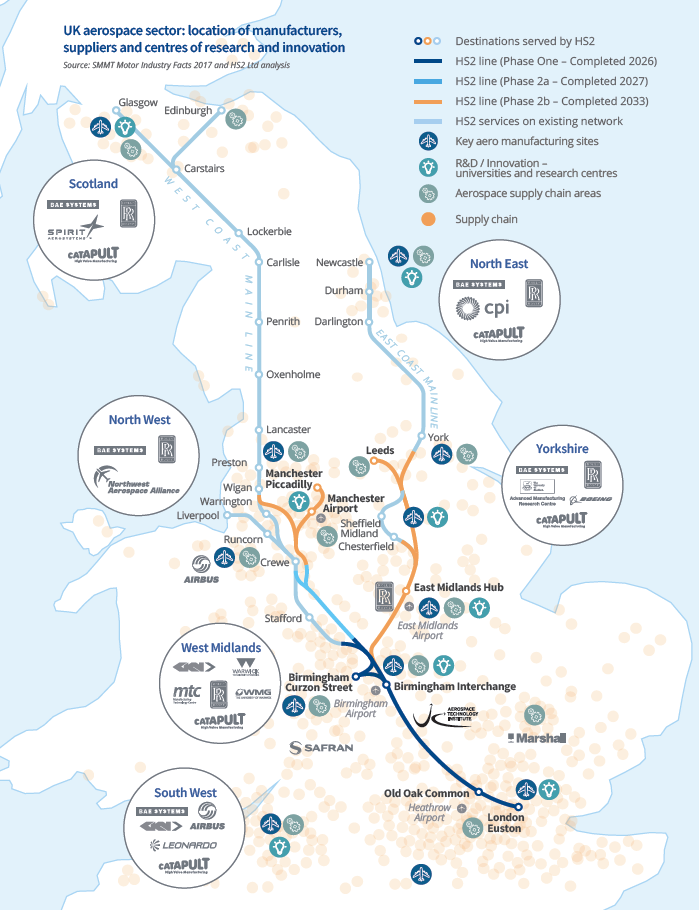 The UK aerospace sector is another example, with more than 250,000 jobs across the Midlands, Lancashire, Cheshire and Edinburgh, and over 3,000 businesses in its UK supply chain.

In the Midlands, HS2 is expected to cut journey times between the East Midlands and Birmingham to just 20 minutes, and Birmingham Interchange in Solihull to 17 minutes, bypassing congested roads and slow existing rail links.

This will benefit Midlands-based Rolls Royce, one of the world’s leading manufacturers of aircraft engines and suppliers of aircraft control systems in Birmingham, Wolverhampton and Coventry.

In the North West, HS2 will almost halve the rail journey time between Preston, which sits within the Lancashire aerospace cluster, and the West Midlands aerospace cluster – bringing benefits to more than 200 aerospace companies with a combined turnover in excess of £7bn.