Industry 4.0 and the Smart Factory

Posted on 4 Dec 2016 by The Manufacturer

This year, it’s been impossible to miss the buzz surrounding Industry 4.0, the ‘fourth industrial revolution’. And while the world of business is full of fads and fashions, most observers agree that Industry 4.0 has undeniable substance. But talking about Smart Factories is one thing, and building them quite another.

Most discussions of Industry 4.0 and the Smart Factory have centred on its bottom line business benefits in terms of new business models, hi-tech analytics, and exploiting the internet of things to create connected intelligent supply chains.

That’s understandable, of course. For it’s there that the biggest ROI is seen to be, generally in the form of selling more products to more customers in more markets and through more mechanisms. You’ll hear talk of Industry 4.0 enabling servitization, for instance, and equipment ‘calling home’ for maintenance and the replenishment of consumables.

But to be blunt, there’s a lot less talk about Industry 4.0 and the Smart Factory.

In one sense, this isn’t surprising. Talk of the Smart Factory goes back to the 1980s, with fanciful talk of ‘lights out’ factories, in which robots did all the work, and Automatic Guided Vehicles moved materials from workstation to workstation.

Turn the clock forward to today, and it’s clear that such talk was well-intentioned, but premature. The technology of the 1980s was good, but not that good. Most Smart Factories were demonstrators and proof-of-concept affairs, lacking in the flexibility for real-world manufacturing. 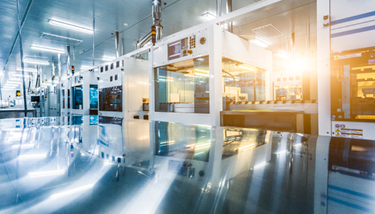 And yet – ironically – the technology that will deliver the Smart Factory is often older. Take 1970s-era internet, for instance.

In the shape of the internet of things, it’s connecting IP addresses belonging to factory-floor devices, rather than 1970s university departments and military locations.

Today’s microprocessors are a huge advance on the 1980s microprocessor in the earliest IBM-compatible personal computers. But they’d be instantly recognisable to a time-traveller from that era.

Likewise the clever analytics at work in a Smart Factory. The R analytics language, for instance, dates from 1993. Python – rapidly finding favour in real-world manufacturing analytics applications – is older, dating from 1989.

Ethernet – the basic building block of the Smart Factory’s LANs and WANs – is even older, dating from 1973, and commercialised in 1980. Today’s Ethernet is faster than a 1970s-era Ethernet, but is the same Ethernet that is enshrined in 1980’s IEE-802 standard.

Built with what we already know

The real message here is that the Smart Factory isn’t some giant leap into the unknown, representing an enormous risk that most real-world manufacturers will rightly be reluctant to take on. Instead—to repeat the phrase—it’s evolutionary, not revolutionary.

Read more manufacturing insights from Andy Gough, including his latest blog, Building the Smart Factory of the Future.

Put another way, each piece of the Smart Factory is a more-or-less broadly familiar technology, with which most manufacturers will be familiar.

And in that sense – unlike in the 1980s – the Smart Factory has a certain inevitability. It’s simply a smart idea whose time has come.

If you would like to know more, read my recent blog:  How Industry 4.0 will help to grow your manufacturing business.