GKN Driveline grew by 7% in 2012, more than the rise in the car market it supplies. This means the drive shafts manufacturer gained market share and the global company, headquartered in Redditch, can now claim that 40% of all the cars built today are fitted with GKN drive shafts.

Be leaders in your field: GKN’s four operating divisions

Outgrowing your markets is one of five strategic pillars for success devised by Nigel Stein, CEO of parent company GKN plc, and the GKN board. “Be a leader in chosen markets, have a global footprint with manufacturing in global locations. Have technology driving your margin. Have more than a commodity product to offer customers. Achieve operational excellence and outgrow your markets,” Mr Stein reels off the strategic points as if it were a simple shopping list.

But GKN appears to be delivering confidently. Strong 2012 financial results revealed that all four divisions – Driveline, Powder Metallurgy, Aerospace and Land Systems – posted record profits. Group dividend increased by 20%. Its shares are up 45% over the last 12-months and it was one of the FTSE’s top risers in late March. “But I learned a long time ago not to get seduced by the share price,” says Mr Stein. “Focus on the fundamentals – growth, technology, investment – and the stock will look after itself.”

On the flipside, the company’s pension deficit has increased this year, with the acquisitions, from £868m in 2011 to £978m in 2012. And GKN Driveline’s European market is falling, as is the military market for Aerospace. But the overall trajectory is upwards and forward.

GKN plc is an anomaly. A market leading manufacturer in both automotive and aerospace, globally dominant in both drive shafts and all wheel drives (AWDs) and more recently a top tier one supplier to aerospace engine manufacturers such as Rolls- Royce and GE. It has factories in 31 countries. It is British. And it is 250-years old, starting life as Guest, Keen and Nettlefolds, an ironworks formed in 1759.

“We spend about three per cent of sales on R&D. One of my stated objectives is to drive that up” Nigel Stein

The four GKN divisions at first seem disparate, but not when the five point plan is applied, Stein says. “These businesses are complimentary when you consider they each fulfil our five global leader criteria, with engineering at the core.”

Tall, polite and on the ball with all questions, Nigel Stein became chief executive officer in January 2012, moving up from running the automotive group and he has been with GKN since 1994.

He took the CEO’s mantle from Sir Kevin Smith, the aerospace industry heavyweight who is now a British trade ambassador. Big shoes to fill, but Nigel Stein wasted little time in getting his feet under the table. Under his captaincy GKN has grown steadily and he was the chief architect behind two of three substantial acquisitions made in the last two years. “We prefer organic growth but you keep your eyes open for opportunities and need to be ready to respond,” he comments.

Volvo Aerospace was acquired in July 2012. GKN had no aerospace engine division (GKN Aerospace focused on composite aerostructures) and Volvo’s engineering disciplines – lightweight engineering, working at high temperatures – were very similar to its aerospace division. “We’ve grown from the bottom up in this segment – build to print, fan blade repair – from small beginnings we’ve worked our way up the food chain. But it was only about 10% of our business. When Volvo came up we were fortunate to be able to acquire it.” The Swedish company has proved a good “cultural fit” with GKN says Stein.

Volvo was expensive, £633 million, and GKN’s shares suffered as the market feared the effect of this cost on company operations. “But once we did the deal and people could see what sense it made, our shares recovered to an extent.” More recently, further recovery in the car industry resulted in a resurgent share price.

Getrag, GKN’s second recent acquisition, was a Land Systems’ target four years ago, but the recession delayed GKN’s move until October 2011. “Their parent was keen to drive off, excuse the pun, into new products such as DCT clutch technology. Their all-wheel drive business was a great fit for us, as we were always strong in Asia and they were strong in Europe and North America.” Getrag helped GKN to become the world leader in AWD shafts.

The boss is keen put more resources into research and development. “We spend about three per cent of group sales on R&D which arguably is a bit lower than we’d like.

“One of my stated objectives is to drive that up. In similar companies, R&D spend is about three to four per cent, some companies spend more, though not many that are comparable to us [in size]. But we are focused about what we spend it on and making sure that we get the right returns,” asserts Stein.

“A lot of senior people in here understand our technology,” he continues, explaining that Richard Parry-Jones, Ford’s ex-chief technology officer who heads the Automotive Council is on GKN’s board, and Marcus Bryson, Aerospace and Land Systems CEO and a leader for the Aerospace Growth Partnership formed by trade body ADS, is an engineer.

GKN also has a group technology strategy board, which consults about how to share technology across the group and the group has global university partnerships. For example, a GKN Driveline technology centre in Germany has close relationships with Aachen University and the Powder Metallurgy division in the US works with Penn State University. “In the UK we would work more with institutions like the University of Bristol for aerospace,” says Stein.

One of the problems with fast growth is filling the job vacancies. Both GKN’s aerospace businesses, for composite structures and engine components, are growing fast and the aerostructures business is especially brisk. GKN Aerospace had to implement a special recruitment strategy to find the necessary skilled people to deliver these composite parts to Airbus and Boeing, which have massive order backlogs.

“As a CEO you must reserve a little nervousness, to avoid that dangerous complacency”

And competitors want the same people, especially those with experience. “We will overcome that, but we have to work hard at this. We train our own people. But there is competition for them and you have to ensure you have the right offering to attract them,” says Stein.

When UK car manufacturing was down in the 2000s, apprenticeships were neglected.

More recently GKN relaunched its scheme with gusto and now has about 160 apprentices in the UK at different stages. At the last apprentice open day in Bristol, about 1,000 people attended, including family, for 40 places. “The industry, both aerospace and automotive, has rightly worked hard on its image. Now with initiatives like the government’s See Inside Manufacturing school visits, which we were part of, it’s changing people’s perceptions.” Now GKN runs a series of school visits to its UK sites. 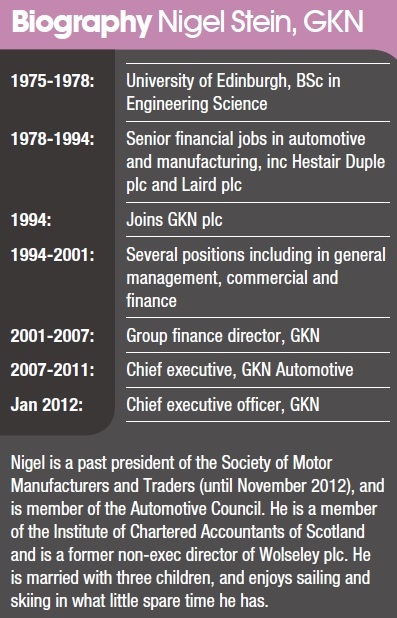 The challenge of running a publically quoted, global engineering business, apart from actually running a global engineering business, is finessing two often incompatible needs: investing in the business to be competitive and giving shareholder returns. “We have a very supportive shareholder base for our investment needs, they understand the GKN story,” Stein says. “We discuss investment intent. Generally the UK focuses far more on the short term than the German Mittelstand companies who take a 10 to 20 year view. In our business we keep saying it can take us three years from winning an order to actually going into production. You have to have that long vision to deliver the performance you set.”

Part of the solution is to be lean. GKN in the UK has built up a strong reputation for lean manufacturing. Today lean, or operational excellence, is implemented uniformly across all GKN sites globally and is one of the five strategic pillars.

“GKN was not a leader in this originally, but recognising it could do more it set off on a lean journey, adopting different ideas from different people,” says Stein.“About 10 years ago we saw there was benefit in adopting this across the whole group. Peter Watkins [a frequent speaker at TM’s conferences] had been running a lean programme at Driveline with very clear messages. And with customers such as Toyota and Nissan, Driveline was really familiar with the concept of operational excellence.”

GKN Lean Enterprise has spread across the company and today, visit any GKN factory in any of 31 countries, from aerostructures to metal sintering, you will find people who have done the same lean training courses practising the same GKN Lean methods.

Stein says he visits a factory “as often as I can” and estimates this would be around once every three weeks. “We visit and comment, it’s very important to show interest and even make suggestions for improvements. People see that they are being recognised.”

He recaps the five strategy pillars, and emphasises the “globalness” of GKN throughout the interview. The company is strong in China, for example, where Driveline recorded 23% sales growth and 6% market growth in 2012. Back to outgrowing your markets, Stein says neither GKN nor the UK must lose sight of this. “You are either winning or losing. You need to grow faster than your markets. If you stand still you are gone,” he states.

“Here we push as fast as we can to keep racing ahead. There can be a tendency to be complacent when you’ve done something well but then you will rapidly lose the advantages that got you to where you are.”

As a personal business philosophy, Nigel Stein says “Any leader in a business has to be a little paranoid. You have to be proud and confident about what you do and what you can do. But you must reserve a little nervousness, to avoid that dangerous complacency.”