Antony Sheriff, managing director of McLaren Automotive, is one of the key people responsible for for creating arguably the fastest and most comfortable supercar on the planet, the McLaren MP4-12C. Tim Brown meets the American brains behind the car and tours the stunning McLaren Production Centre. 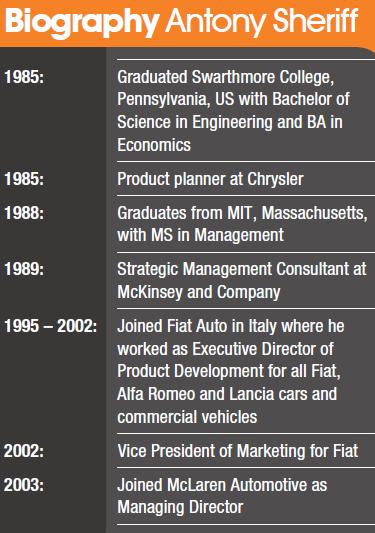 About nine years ago Antony Sheriff left Italian city-car manufacturer Fiat to head up McLaren’s fledgling automotive department. The aim was to create a road car division capable of semi-mass producing vehicles equal in performance to those driven on the race track by Formula 1 drivers Lewis Hamilton and Jenson Button.

In the years that followed Mr Sheriff helped to transfer the technical capability held by one of the most successful names in motorsport from the racetrack to the road. The result was one of the most talked about supercars of recent years, the MP4-12C.

“I love cars and have always loved cars. That’s why I’m in this industry,” says Mr Sheriff with complete conviction. A New Yorker, he says that although most of the cars he was familiar with during his childhood were bright yellow and came equipped with a driver and a meter, he was most certainly a petrolhead. He set about engineering his career with precision, the end game being a senior role at a high performance automotive company.

He completed a dual degree in engineering and economics at Swarthmore College, Pennsylvania, before going to work at US car giant Chrysler. From there Sheriff went on to study at the Massachusetts Institute of Technology (MIT), mainly in order to access a research programme into the automotive industry which was being run there. After completing a Masters in Management, he spent six years as a consultant to car companies at McKinsey before wanting to get more hands-on.

“I got fed up of telling people how to make things and decided to put my money where my mouth was and got involved in making cars,” he says. To me, this was about the most exciting thing that one could do. I ended up at Fiat in Turin, Italy, where, for most of the time, I was director of product development.”

“I spoke Italian before I took the job, and had actually done an apprenticeship as a designer with Italian car design and engineering firm Pininfarina a long time before. I’m a New Yorker and grew up in New York City but was fortunate that I was actually born in Switzerland and my family is half Italian.”

How it’s manufactured – the McLaren MP4-12C

The McLaren Production Centre (MPC) is designed to be environmentally efficient. The roof collects rainwater and is designed to integrate photovoltaic panels in the future, and the building uses a low-energy displacement ventilation system. No soil was removed from the site, where all the excavated material has been used to help conceal the building within the landscape. Set low to minimise its impact, you could miss it all together.

Taking 15 months to construct and at cost of £50m, is now in full operation having been officially opened by PM David Cameron in November last year. Components are delivered to the MPC where the cars are assembled, painted and then tested, passing through a rolling road and monsoon testing booth before leaving the building. Beneath this floor there is a full basement level for storage and plant and above is a mezzanine floor overlooking the production line.

The whole 34,500m2 facility is white, designed to highlight anything that is out of place. It is a serene, clinical environment and before anyone has a chance to mention it, what is so apparent is the absence of sound. An automotive manufacturing facility that is quiet is singularly impressive.

This trick was achieved partly due to the decision to not automate much of the line and to use electric tools rather than compressed air powered tools. “We don’t need the automation because we have some very sophisticated production controls that allow the line to move at a constant pace, even though we don’t have a physical assembly line moving it,” says Sheriff. “Also, because of the volume that we have, it allows us to remove significant investment and put those funds into things that make a difference to the performance of our product.”

Other than allowing McLaren to channel more resources into the car’s technology, benefits of this decision include a very clean and serene environment for its workforce, removing distractions and clutter to help hone the technicians’ focus on build quality.

Finally, it has provided McLaren with a great showcase for buyers and visitors to see how it builds its cars.

The body assembly line is very short; you can probably walk its length in 15 seconds. Sheriff says that this is testament to the innovation in the architecture of the vehicle and the way that the car ‘comes together’ which, he says, is unique in the industry. He believes that the McLaren Production Centre is the first ever car production facility that has been built around the architecture of the car.

“The MP4-12C has very unique architecture, as will our future variants,” he says. “When we built the Production Centre it took into account the level of complexity and differentiation there would be from one model and one variant to the next. One of the advantages of having a flexible system is that as we introduce new variants and new models we can add or delete work stations without a fundamental tear-up of the entire production system.”

Rolling off at a rate of about eight cars a day presently, McLaren says it is on track to produce in excess of 1,000 cars in its first full year. If you want to buy an MP4-12C, you’d be twiddling your thumbs for up to a year before delivery, such has been the demand.

A change of pace

With a zeal for four wheels, Italian ancestry and an education geared towards the auto industry a move into the supercar world was probably assured.

But 10-years ago, when the call came from McLaren to join them, the offer was welcome if a little disconcerting. “Coming from a relatively stable, high level position in Fiat, at a high level, there was a certain amount of risk involved in coming into a managing director role for something that didn’t really exist.”

At the time, McLaren had built the F1 road car and was well on its way to completing the first phase of the SLR programme, a car jointly developed with Mercedes-Benz, which was to be followed by six years of production in Portsmouth and at the McLaren Technology Centre in Woking.

“Coming from a stable, high level position in Fiat, there was a certain amount of risk involved in coming into a managing director role for something that didn’t really exist.”

McLaren did not have a firm plan to become a full-time road car manufacturer but was scouting for someone to build a team to assess the viability of such a plan, and Sheriff was chosen to guide the company down this new path following the end of the SLR production.

To some it may seem an odd transition from Fiat to McLaren – from a low cost, high efficiency manufacturer of compact vehicles to a maker of low volume, opulent performance cars, famed at the time for its $1m McLaren F1 powerhouse.

But this was far from the incongruous transition it might have seemed, says Sheriff.

“Fiat is excellent at designing very clever small cars that rely on innovative architecture,” he says. “The closest thing in the auto industry to designing a great sports car is designing a great very small car because it is all about packaging, minimising components, reducing frontal area, thinking of innovative ways to use space. All the same things you do to make a light weight compact sports car are done to make a light weight compact, inexpensive city car. The mentality is much more similar than if I had spent my life making SUVs.”

The McLaren Technology Centre, which houses the Formula 1 team and features a man-made lake providing water to cool the on-site wind tunnel, is one of the most iconic buildings in the UK. Designed by Sir Norman Foster, it represents much of what modern manufacturing aspires to be – clean, lean, high tech and ambitious.

It was certainly going to be a tough act to follow when McLaren Automotive needed a new building to manufacture its next generation of products. Local government restrictions meant that the new building – the McLaren Production Centre (MPC) – is, from the outside at least, nowhere near as iconic as its predecessor.

And then there’s the car

The MP4-12C is the company’s first wholly designed and built production car since the McLaren F1, the first series produced car by McLaren. It is 1,400kg of pure unadulterated power. Underneath its sleek curves sits some of the world’s most sophisticated automotive engineering, much of which has its roots in McLaren Formula 1.

Like a Formula 1 car, and all McLaren vehicles for the last 30 years, the MP4-12C is built around a carbon fibre chassis and is the only car in its class with this feature. It is powered by a mid-mounted 3.8-litre V8, twinturbo engine made by Ricardo, which reins in 592 horse power and has an incredible top speed of 205mph.

Combine that with the fact that it produces just 279g/km of CO2, provides a supremely comfortable ride thanks to its advanced suspension system and features F1 technologies including brake steering and you have one of the most impressive cars on the road.

“One advantage of having a flexible system is that as we introduce new variants and new models we can add or delete work stations without a fundamental tear-up of the entire production system.”

Its rather utilitarian name might appear odd but the ‘MP4’ has been the chassis designation for all McLaren Formula 1 cars since 1981. The ‘M’ refers to McLaren, with the P4 referring to Ron Dennis’s Project Four Racing which merged with McLaren in 1981. The ‘12’ refers to McLaren’s internal Vehicle Performance Index through which it rates performance criteria for competitors’ and its own cars. The criteria combine power, weight, emissions and aerodynamic efficiency.

Finally the ‘C’ is short for carbon and represents the carbon fibre MonoCell on which the vehicle is based.

The MP4-12C sits second on Top Gear’s Powerboard behind the V8 Ariel Atom and is faster round the BBC show’s test track than the Ferrari 458, arguably its closest competitor, by nearly three seconds. Despite this the car has had its critics. Most criticisms seems to revolve around the idea that the car lacks character because it is too perfect – a strange comment, perhaps, considering this was surely the aim. The nuances of supercar perfection are a mysterious art form.

“McLaren aims to support future growth and inject new life into high technology manufacturing and engineering jobs in the UK,” says Sheriff. “We want to inspire future generations of designers and engineers to work in these fields in the UK and I have no doubt that the bright young engineers working on our Formula 1 and sports car development programmes will continue to do Britain proud.”

Antony Sheriff has managed to successfully integrate a series automotive division into the F1 beast that is McLaren. With a promise of a new product every year for the near future, you can expect the roar of a McLaren engine echoing along roads and racetracks, home and abroad, to become a more common sound.