High energy prices are the bane of British manufacturing – or are they? Alex Mardapittas, CEO of EMSc (UK), a manufacturer of voltage optimisation equipment, has rather more ambivalent views on the escalating cost of energy which is bringing his company steady international success.

When the Climate Change Levy was introduced in 2001, the cost of energy in the UK was startled into a leap from around 0.4 pence per kilowatt hour to around 1.5p/kWh.

While many companies, not least high energy consuming manufacturers, choked and sputtered on the hike in running costs, Alex Mardapittas, CEO of EMSc (UK) saw an opportunity to put his technology to the use it had been meant for but never been valued for up to that point.

He explains: “Before the climate change levy, not many people were interested in investing in energy saving technologies. We had taken the Powerstar product £10,000 in maintenance costs by perfecting the voltage supply to your motors. Oh, and by the way we’ll also save you 50 quid on energy.” But the Climate Change Levy turned the business case on its head. “Overnight we saw the payback period for investing in our kit become 15 times less,” recalls Mardapittas. “Now we barely mention the equipment benefits in a UK pitch. All anyone is interested in is how much it will reduce their energy bill.” Energised growth And so 2001 marked the beginning of a period of sprightly growth for EMSc (UK). Energy prices continued to rise and, as organisations across the to market in 1999, but over three years we had been selling it to businesses as a problem solving device to mitigate the impact of either high or low voltage on their plant and equipment.”

This impact can be significant (see box opposite) but Mr Mardapittas originally developed Powerstar, based on a 1906 technology he read about at Pilkington Glass, as an energy saving device – not an efficiency problem solver.

“From day one I had always wanted to sell the energy saving benefits,” he says. “But it’s hard to make the business case from this point of view when the cost of energy is low. The pitch was more along the lines of, ‘We’ll save you £10,000 in maintenance costs by perfecting the voltage supply to your motors. Oh, and by the way we’ll also save you 50 quid on energy.”

But the Climate Change Levy turned the business case on its head. “Overnight we saw the payback period for investing in our kit become 15 times less,” recalls Mardapittas. “Now we barely mention the equipment benefits in a UK pitch. All anyone is interested in is how much it will reduce their energy bill.”

I like competition, it raises market awareness. ‘A lone wolf is always hungry, a pack of wolves always eats well’

And so 2001 marked the beginning of a period of sprightly growth for EMSc (UK). Energy prices continued to rise and, as organisations across the public and private sector caught on to the erosion of bottom line via energy consumption, orders rolled in. Between 2007 and 2012 the company went from £1m turnover to £15m.

While some manufacturers today complain that demand is present but growth hampered by a lack of skilled people, Mardapittas says he is lucky. “We saw our biggest growth at a time that others were in recession. So as other engineering firms in Sheffield were laying people off, I employed them – and there is nowhere better in the world to find engineering talent, particularly for steel product, than Sheffield,” he asserts.

Britain remains EMSc (UK)’s major market, but the product is rapidly building its export portfolio. Indeed its impressive growth in one market earned it the title of UK Trade & Investment Exporter of the Year for 2013.

Mardapittas explains: “We launched an attack on the Australian market in October last year and in six months saw 200% growth.” Prior to October 2012, EMSc (UK)’s Australian business was achieving revenues of around £250,000. “Australia has always been a market with a lot of potential for us,” says Mardapittas, “because the immense distances its grid has to span mean that the voltage is very high.”

The spur to the market however, was the introduction of carbon taxation in January 2012. “Just like the UK saw ten years ago, this is raising energy prices and putting investment in energy saving technologies at the top of the agenda,” observes Mardapittas.

Worldwide, the CEO is looking out for governments pushing out such incentives in order to find his next growth opportunities. “We have targeted another 100% increase in turnover within the next five years and, although the UK is still important to us, I know that we cannot achieve that step change here.”

The USA, certain European nations and China are prominent growth markets for Powerstar. There is also interest in the Middle East which is pushing through ambitious industrial rebalancing strategies to reduce reliance on oil & gas. But although some government incentives have been put in place in Saudi Arabia and Qatar to reduce emissions, energy prices are so low that EMSc (UK) tends to find itself selling on the old efficiencies model which used to be so prominent in the UK.

Although it is now primarily marketed as an energy saving technology, Powerstar is, at its core, a voltage optimisation product. This means it can protect plant and equipment from the impact of high or low voltage in the national grid, smoothing and perfecting supply to vulnerable equipment.

Voltage varies nationally and regionally. Sheffield’s high voltage is one of the reasons Mr Mardapittas chose to locate his business there. Its average voltage of 251V is 4% higher than the national average – a capacity hangover from a more virile industrial age.

High voltage is more common than low voltage and can cause a variety of problems for manufacturers. It can damage electrical equipment or cause equipment to shut down when a surge comes through the lines. It also causes heat problems in drives and motors which shorten life expectancy and increase the need for maintenance.

Incidences of low voltage a relatively rare but have one straightforward and debilitating effect. Machinery simply stops working.

Mardapittas says that EMSc (UK) has not historically sold many units designed to solve low voltage problems, but that recently this has changed in one particular market. “A few months ago we saw a big upswing in enquiries from Germany.

“Almost every enquiry was driven by concern about low voltage,” says Mardapittas, and the reason for the sudden sense of vulnerability to grid instability is very plain.

“Its a direct result of the move away from nuclear power and towards a heavy reliance on renewable energy,” observes Mardapittas. “There is a lesson in the concerns of German industry for the UK government as it forms its energy strategy,” he sums up.

Considering the potential obstacles which might stop EMSc (UK) achieving its next tranche of growth, Mardapittas is concerned by the difficulty of shipping his heavy products – Powerstar units range from 200 kilos up to 6.5 tonnes. Another worry is the cost and security of the copper which is used extensively by EMSC (UK). But what bothers Mardapittas most is the dearth of competition he sees globally. “I like competition, it raises market awareness,” he says. “If you go into a market alone it takes a lot of hard work and expense to communicate the benefits you can bring.

“I am a Greek Cypriot by birth and there is a Greek saying that goes: ‘A lone wolf is always hungry, a pack of wolves always eats well.’ It worries me that there is so little competition for us globally.” 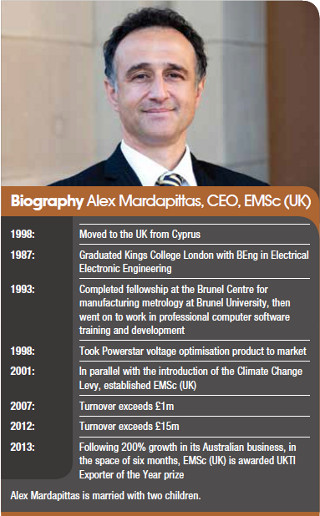 Mardapittas is not mollified by the idea that less competition means less threat to the company’s intellectual property. “I am not worried about IP. If people try and copy our product it means there is appetite in the market.”

With regards to China in particular, Mardapittas pours scorn on the idea that manufacturers should avoid the market for fear of counterfeit. “We have been identified by the Chinese government as a ‘champion product’ for energy saving. This is a great honour – there are just seven other products which have been given this champion status. What would it say about us as a company if we turned around in the face of this opportunity and said we would not sell to China in case someone tried to copy us?”

Having asked for competition, Mardapittas is also keenly aware of the need to keep one step ahead of it. EMSc (UK) invests around 15% of turnover annually in R&D and partners with Sheffield Hallam University and the University of Warwick on key projects. “The best thing we ever did was partner with Warwick to develop an algorithm which explained a certain aspect of our products,” says Mardapittas. “We could demonstrate the aspect but we did not understand it mathematically and as an engineer I believe that if you cannot simulate your product or process with a mathematical model then you do not fully understand it.

“I think this is overlooked by some manufacturers. It is time consuming to collaborate with universities, but knowledge is power,” sums up the CEO, who snubs common complaints about the UK as a manufacturing environment, optimistically embracing it as a knowledge hub and anticipating a rosy future as the Patent Box fosters innovation.

See ’s Energy reports 2013 for guidance on energy procurement, generation and optimisation. The three part series will be circulated
with the magazine or can be downloaded from the website.