Since 2012-13, the number of fatalities at work in Great Britain has remained broadly level, while non-fatal injuries have steadily decreased since 1986, showing an overall reduction of approximately 58%. Martin Dean explores the discrepancy.

Since its introduction in 1931, senior business leaders have been trained to regard lost time injury (LTI) rates as the tell-tale sign for latent fatalities and serious injuries. In fact, the model only appears valid for high-frequency, low-consequence activities, while high-hazard activities are in an unforgiving separate category.

Dropping LTI figures have been tricking companies into feeling safe, when fatalities are still occurring. Are serious injuries and fatalities, then, just random events that company executives are powerless to predict? Or is there a method to foresee and pre-empt them?

A few years ago, I was asked by a major paper manufacturing company to attend their annual board meeting and advise them on safety. I asked about the latest LTI. They told me about someone who had tripped over a loose carpet tile in the office and broken her ankle.

As a result, they carried out a thorough assessment of all carpeting and talked to their staff about trip hazards. Their actions were exemplary, and I told them so.

I then asked about the last near miss. They described their production process, the trees they grow that have to be brought into the yard with a grabber truck. A tree trunk had recently fallen off one of the grabber trucks onto a nearby pedestrian walkway, which had been empty.

I asked about actions taken. They shrugged. Nothing had been done. Right there was the potential for a much more serious injury than the ankle broken in the office.

The temptation is to focus on the actual incident rather than the potential; to look at statistics and hone in on the LTI rates rather than those events that with just one change could have been fatal or life altering.

In other words, we should be examining the ‘high potentials’, those that have the dormant capacity to turn into severe incidents. 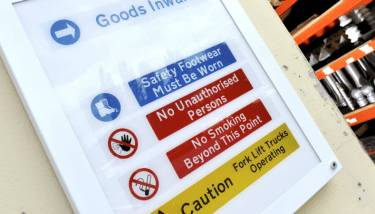 Business always has to balance cost with effectiveness and consider carefully where to invest time and resources, but, in view of the plateauing fatality rates British industry is experiencing, we may be getting that balance wrong.

Organisations need to understand the causes for worst-case scenarios, as they are frequently different to those for minor injuries.When we look at potentially serious injuries and fatalities, the stakes are high.

We need to understand the causes for worst-case scenarios, as they are frequently different to those for minor injuries. To address the underlying reasons, business leaders need to ensure that they have the right information at their fingertips to make informed decisions.

Senior executives should be asking themselves if they have a clear picture of the risks their people are exposed to and a thorough understanding of the potential consequences. Are employees and the general public fully protected and, if not, what systems are breaking down?

What needs to be fixed to protect, for example, the pedestrian on the pavement next to the paper company grabber truck?

Working with multi-national companies on safety over several decades, we have repeatedly witnessed the same barriers to effective avoidance of high-risk incidents.

1. Safety systems with tunnel vision: While many companies will claim they couldn’t have seen a catastrophe coming, indicators of impending disaster were often there, but read incorrectly or were simply not noted because of an overreliance on systems designed to focus on LTI prevention.

This failure to identify potential future disasters is likely to mean resources are not focused where they should be to prevent serious incidents from arising. A blinkered view of safety management that assumes prevention of unsafe acts, near misses and minor injuries will preclude serious injuries and fatalities and is likely to lead to a significant blind spot in safety management systems.

2. Accident investigations processes that aren’t as good as you think they are: Most organisations are now so thorough in their incident investigation that they apply the same rules and resources to everything from a manual lifting incident resulting in a sprain (an event with a low serious-incident potential) to a sprain caused when moving out of the way of a moving forklift truck (high potential for a serious incident).

Actual not potential outcome is dictating the level of attention paid during the investigation. If we consider that the most common causes for fatal accidents at work in the UK in 2016-17 were being struck by a moving vehicle, falls from height, people struck by a moving object, employees becoming trapped by overturned or collapsed equipment, contact with moving machinery and contact with electricity, it becomes apparent that causes for serious and minor injuries differ.

The most common causes of lesser injuries – slips, trips and falls, manual handling and lifting – don’t feature on the list of reasons for fatalities. In fact, only around 20% of minor injuries have the potential to turn into serious injuries or fatalities. With organisations endeavouring to give all events, whether great or small, the same level of resources, the result is a dilution of attention to those that bear the potential for a more serious event.

3. Failure to identify a pattern: Organisations often believe serious incidents arrive like bolts out of the blue. This is because they are unable to put together the data jigsaw pieces that would show them the bigger picture.

Since calamitous events are much less frequent than minor events, data analysis can be problematic. It is vital for organisations to understand the often-complex circumstances that can be seen as precursors to a serious injury or fatality, rather than treat them as unpredictable one-offs

4. Taking a silo approach to safety: In many organisations we visit, safety is regarded as separate to business objectives. If safety management is not well integrated into a company’s structure and mission, it risks being handled in isolation.

This creates a barrier for corrective action, which ought to go beyond fixing behaviour and focus on exposure. By integrating safety in operational practices and engaging business leaders to be role models for the correct attitude to safety, organisations can go a long way towards removing these barriers and introducing suitable controls to prevent serious injuries and fatalities.

Use controls appropriate to the risk level

The most obvious way to do so is to use the ‘Hierarchy of Controls’ to determine which controls are necessary to protect employees, as much as possible, from risk.

Ranked from most to least effective the list consists of:

The logic is simple. Use the highest level of control whenever possible, with the addition of lower levels of control as needed. This is the theory, but budgets and practical considerations such as the immediacy of the need for a control obviously play a role when putting the control in place.

Obviously, the highest control must be used when there is a high risk of a serious injury or fatality, but in certain cases, multiple controls are indicated. However, the controls are only effective if used.

Enable application of the controls

The application of administrative controls and the wearing of PPE is often down to individual behaviour, so it is important to communicate the value the company places on their observance and for senior management to lead by example.

Employees also need to feel empowered to apply controls if they see the need to do so. At DuPont Sustainable Solutions we use a ‘stop-work-authority’ process, so employees feel able to use the necessary controls and, if required, stop work in order to protect themselves.

Key to the correct application of the Hierarchy of Controls is leadership that promotes safety values, and employee awareness and involvement.

Some of this can be achieved by increasing the visibility of high-risk exposure, by changing the incident investigation process so everyone can visualise it vividly and by reviewing the serious injuries and fatalities prevention process regularly and systemically.

Serious injuries and fatalities deserve an intense focus and heightened awareness. To protect their employees and organisations from catastrophic events, business leaders need to take a differentiated approach to safety management and should bear in mind the critical high-hazard activities that present the greatest risk to their people.

The Hierarchy of Controls is a useful first line of defence, but it will only ever be effective if it is rigorously enforced and business leaders act as role models.

By educating and informing employees through two-way communication, leaders can create a heightened sense of ownership, greater engagement and achieve sustainable protection against operational risk and, most importantly, serious injuries and fatalities.