﻿﻿The benefits of machining with robots is making them an increasingly popular option for the manufacture of large, complex items across a wide range of materials and applications.

In addition, systems developed by the company have been used to replace many hand-finishing tasks, where robots can provide a faster, safer and more consistent approach than manual operations.

In many of the applications developed by CNC Robotics, a system based around a robot has been supplied at around half the price of a machining centre with a similar working envelope.  The superior rigidity of machine tools does allow them to work to higher levels of precision and to cut harder materials.  However, robots are capable of processing the materials used in industries as diverse as engineering, architecture and entertainment, and of working to the levels of accuracy required for most large-scale manufacturing.

The other key advantage of using robots is their flexibility, with a single unit able to be fitted with various heads and used at different stages in the manufacturing process.  For example, a robot can be fitted with an additive-manufacturing head to build up near-net-shape parts and then with a spindle to machine the final component.  Similarly, in composites manufacture, one robot can be used to create a mould or pattern, to produce the fixtures needed to hold the part during finishing, and then to trim and drill the parts made from that tooling. 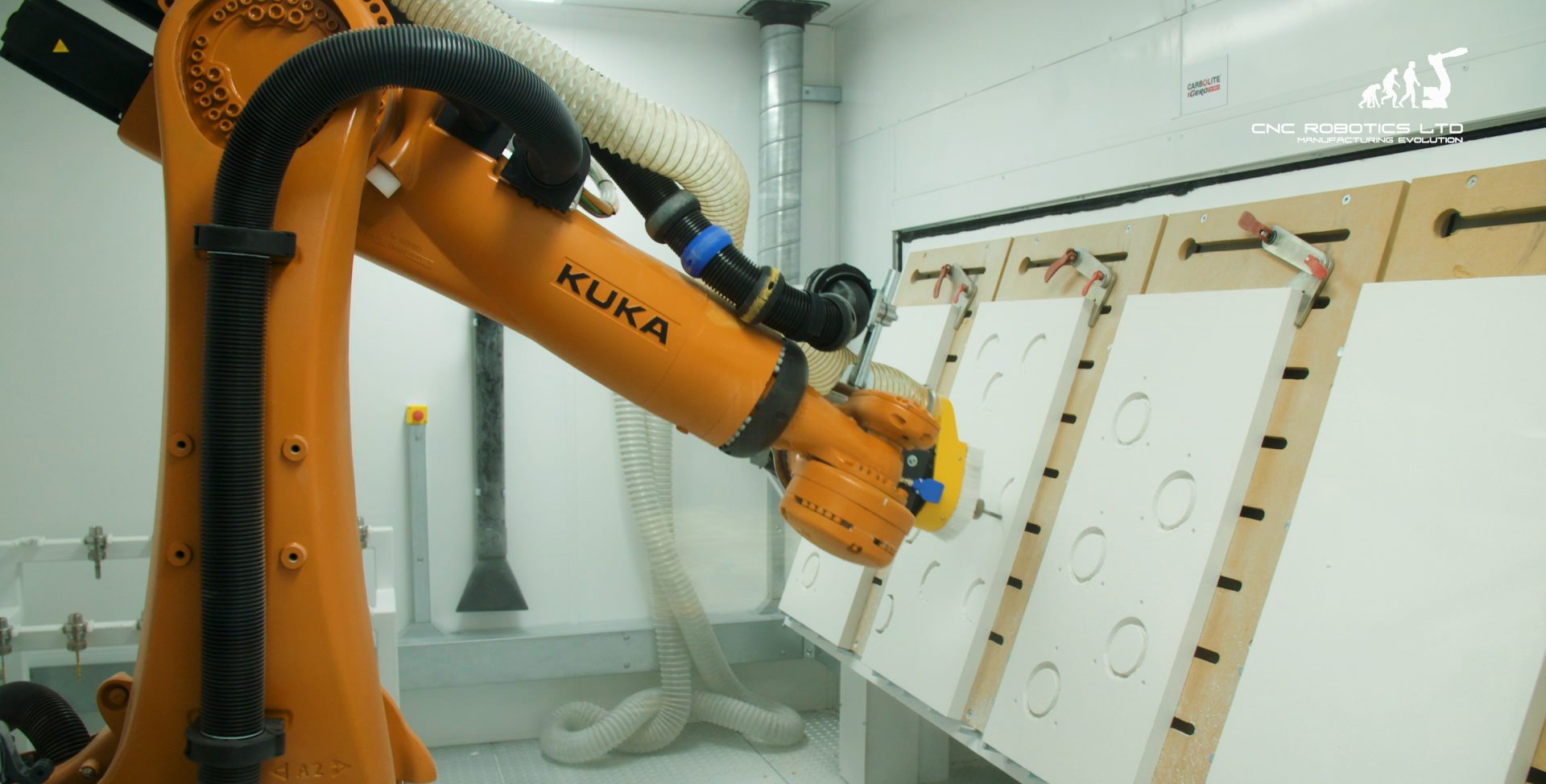 Indeed, using robots for finishing often offers the biggest cost benefits.  Tooling typically needs to be made only once, while many hundreds, or even thousands, of parts might need to be finished.  Using robots gives greater consistency than manual operations, as well as being quicker in most cases.

In cases where a few simple operations are needed, it can take as long to load and unload each item as it does to process that part.  A robot can be equipped to locate the part on the fixture, check that it has been positioned correctly, carry out the drilling and trimming, and then place the part ready for its next operation.

In addition, robots can be made even more capable with the addition of accessories like rotating tables, while the size of part they can handle can be extended by placing them on rails.  The latter approach is often the only way to process the larger items needed for wind turbines or for the marine industry.  These accessories also provide a relatively inexpensive way of increasing the robot’s capabilities as the user wants to take on larger or more complicated parts.

Other finishing operations that can be automated with robots include polishing and deburring.  Again, replacing manual finishing improves speed and consistency.  Another benefit is that using robots eliminates the health and safety concerns resulting from demanding and repetitive manual operations.

Programming anything other than simple movements used to be a major hurdle but that has been made much easier thanks to the growing number of companies that now provide software for the programming of robot operations.  The combination of the robot and the software gives the equivalent benefits to those gained when programming machine tools, including the ability to develop a wide range of toolpath strategies directly from CAD models, together with options to simulate and optimise the program on the computer.  These options help to ensure that the robot will operate efficiently and safely, giving the desired productivity across all types of manufacturing.

Another benefit of robots is their ability to work in challenging environments.  Robots are, of course, able to operate in more extreme conditions than humans but they are also more tolerant than most machine tools.  They are less susceptible to extremes of temperature and humidity, and are usually more resistant to dust or other contamination, making them less prone to problems in difficult manufacturing environments

The flexibility of robots, together with the broad experience of CNC Robotics over many hundreds of installations, means that the company can develop bespoke applications for projects where conventional machine tools are unable to provide a cost-effective solution.  The systems developed can involve a single robot undertaking multiple operations or a series of robots carrying out different stages of the overall process.

Whether the problem is large or complex geometry, an unusual material or a demanding environment, CNC Robotics can work with the customer’s staff to develop innovative approaches to solve complex manufacturing challenges.