Make it British: now on the high street

Posted on 27 Oct 2016 by Victoria Fitzgerald

Cost-cutting overseas supply chains are no longer an options for clothing manufacturers bending to the demands of fast fashion. Victoria Fitzgerald interviews Kate Hills on why the fastest fashion can only be manufactured in the UK.

Kate Hills is the tenacious founder and CEO of Make it British, an initiative dedicated to promoting, supporting and celebrating textiles and apparel companies manufacturing in the UK.

Through her consultancy work and the annual Meet the Manufacturer event, Hills is providing valuable contacts and advice for existing and start-up businesses in the textiles industry and beyond.

She has taken on a big challenge. In the 1970s, more than 900,000 people were employed in fashion manufacturing in the UK; by the end of the last century this figure had fallen by 85%. High street manufacturers had moved production overseas for two reasons: offshore production of large volumes was cheaper and there was a greater quantity of skilled labour and specialist workers outside the UK.

Previously, Hills had 20 years’ experience with the likes of Burberry, Marks & Spencer, Levi’s and Debenhams, so my first question was why? Why did she leave behind a successful career to pursue something that seemed dead in the water?

“I got disillusioned with working on the high street,” she told me. “Everything was sourced overseas. The prices were rising and it wasn’t sustainable in the long-term. Also, I didn’t necessarily agree ethically with their sourcing practices. That’s why I gave it up.

“I started researching what was left of the UK textile industry and found plenty of great businesses quietly getting on with making here,” she said. But Hills understood that if we didn’t begin to support them, eventually the UK would lose the skill of textile manufacturing forever. 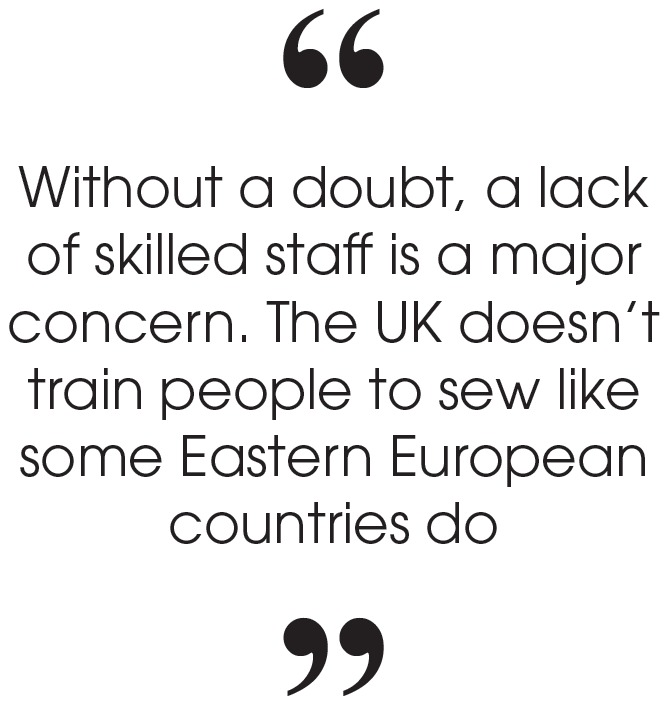 “I set up the Make It British blog to promote brands that are manufactured in the UK. The Meet the Manufacturer trade show and conference came about because I realised there was a big disconnect between buyers and manufacturers in the UK. I wanted to bring them together and give manufacturers a better platform for finding new business,” she added.

Now in its fourth year, Meet the Manufacturer is stronger than ever and Make it British is full of vibrant stories of firms trading all over the world and making in the UK.

“It’s amazing how many new manufacturers are popping up. Now we have other industries wanting to get involved, like furniture companies. We also had our first ceramics manufacturer this year, which garnered a lot of interest,” Hills said, adding that the ultimate aim is to be the sourcing show for everyone looking to make consumer products in the UK.

It’s clear from recent studies, in particular UKFT Industry Statistics Report, that the UK textiles and garment industry is gathering pace. Inward investment has increased, exports are growing and there has been a sharp rise in the number of textiles and apparel firms across the UK.

It’s also apparent that long distance and cheaper supply chains are no longer a viable option for manufacturers that want to capitalise on the immediate hype created by emerging fashion trends propagated by social media. So I ask Hills whether we should start rejoicing about the repatriation of operations.

“All sorts of manufacturers, across all different sectors are definitely bringing operations back. However, as far as the big fashion retailers are concerned, there has been a lot of hot air and empty talk by some of them, but there are others that are quietly getting on with actively sourcing a large percentage of their products in Britain,” Hills said.

As noted, it has been cheaper historically to source and produce outside the UK, but Hills said even this is no longer the case. “Recently, a sourcing director told me their firm is able to source knitwear in the UK cheaper and faster than they can buy it from Turkey.

“It’s a myth that it always costs more to make in the UK compared to overseas. Sure the cost price can be more expensive, but when you add logistics and potential logistics issues, then offset that against getting it made in the UK, it’s well worth it and this is what the likes of ASOS has found.”

Hills used swimwear as an example of how sourcing overseas can be a hindrance. “If you haven’t got swimwear in store when the weather is hot, you may as well not have it at all.

“If you buy it from China during a really hot summer and you run out, you can’t order more without a significant delay. You end up with empty rails. If you buy it locally, you can go back for it quickly,” she explained.

It doesn’t take a genius to understand both the rapidity and unpredictability of the fashion industry, so the quicker a retailer can react to demand, the quicker they can manufacture and get the product to the consumer, and all of this can now be done in the UK.

Hills said, “There are a lot of Instagram-only, fast-fashion businesses that are very clever about how they source. They will post a picture on Instagram, and if they get a good reaction they can make it in Leicester and turn it around in a few days.”

Those firms could not respond at that speed if they were producing in Turkey.

“So a lot of extremely fast fashion can only be made in Britain,” Hills continued. “Boohoo started at really low prices because it could react quickly and sell through 100%. The piece that gets the most likes is the one it asks the factory to make there and then. As long as you’ve got the cloth you can make the style.”

Kate Hills is optimistic about the future of the UK textiles and garment industry, but she knows that the sector is not without its challenges. “Without a doubt, a lack of skilled staff is a major concern and who knows what impact Brexit may have. With sewing skills, in particular, the UK doesn’t train people to sew like some Eastern European countries do.

“Of the majority of sewing factories I know in the UK, about 95% them have international staff. Following Brexit, all those people will be less likely to come over and seek sewing jobs. That’s why we need to train our younger generation and attract home-grown youngsters into the factories,” she said.

Hills is emphatic that manufacturing needs to be publicised more effectively and highlights the value of programmes like Inside the Factory. “Schools need to talk more about careers within fashion manufacturing, not just fashion design jobs.

“I was lucky, I did a course in fashion design and also worked in the industry, but so many of my course mates aren’t working in fashion and my course wasn’t that big. Very few go on to be the next Alexander McQueen or Stella McCartney. They ended up dropping out and working in shops, selling clothes.

“They would have been much better off going to work somewhere that was producing garments. It is positive that I am seeing more young British people in factories, but not at a speed that meets demand,” she said.

As part of her job, Hills is regularly out in the field, walking the factory floors of the manufacturers that ask for her expertise, and what she said was most encouraging for the future of the industry is the rise of the modern factory. 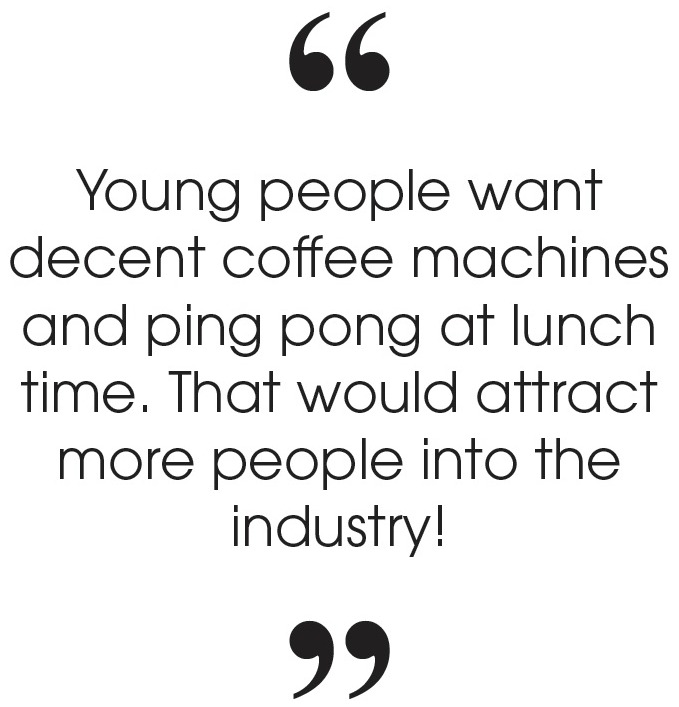 “More and more firms are focusing on the design of their factories and their working environments. Let’s face it, kids don’t want to work in a dusty old Victorian building with a leaky roof.

“There’s a fantastic company called The Albion Knitting Company in North London and it is architect designed. Lots of companies now are being set up by younger people and they make a concerted effort to make their buildings more attractive to work for. Young people want decent coffee machines and ping pong at lunch time. That would attract more people into the industry!”