Undoubtedly, the manufacturing sector is facing change and uncertainty, but it’s also seeking to take control of its own destiny. A new report from Sage, ‘Riding the wave of uncertainty: how process manufacturers are planning for a brighter future,’ discusses the issues, and offers several reasons to be hopeful for the future. 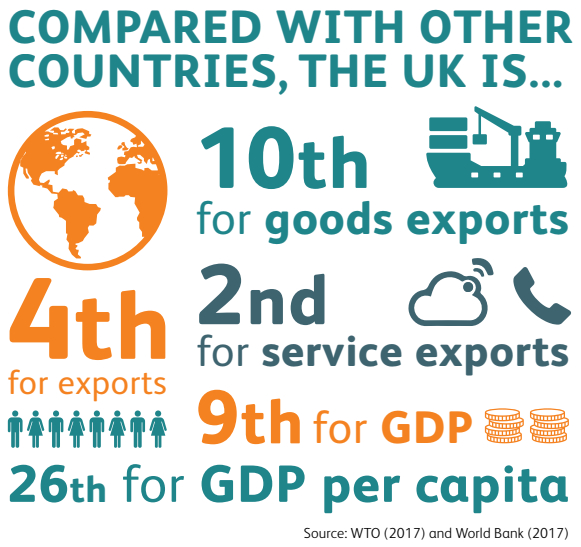 Process manufacturers are “taking control of their destiny, with 99% preparing for growth by investing in tools to help them remain in the driving seat”, and choosing technology that “keeps their eyes on the profit line”, according to a recent report from Sage.

“The most striking outcome of our research was just how confident this industry is, in both its own ability and the future it’s carving out for itself,” states the report.

“Manufacturing is the engine room for a healthy economy and, according toMake UK, contributes 11% to the UK’s gross value added (GVA), while accounting for 45% of total exports,” says Maggie Slowik, Senior Research Analyst at Manufacturing Insights, IDC, which collaborated on the report with Sage.

Maggie adds: “Governments realise that an economy based on service industries alone can’t survive in the long run. Manufacturers themselves are going back to basics, returning to their manufacturing roots, and putting a renewed premium on production knowledge.”

The report continues that by “taking back control, understanding how current affairs will impact their profit lines, and looking at the bigger, longer-term picture, the process manufacturers we spoke to are firmly in the driver’s seat. In fact, 85% of you told us that you believe the UK will be considered an industry leader by 2025”.

“These research findings are encouraging in that they show that most manufacturers are aware of the impending ‘global’ challenges, such as regulations, trade wars, and immigration, and are doing something about them,” says Predrag Jakovljevic, Principal Analyst, at Sage’s Technology Evaluation Centres.

The research shows that the top business priority for a third of UK, US, and Canadian process manufacturers is enhancing profitability, followed by increasing revenue.

However, it’s noticeable that there is a greater focus in the UK around fraud and risk, , states the report, which indicates it’s more of a challenge for UK executive leaders than their US and Canadian counterparts.

From a wider viewpoint, process manufacturers are seeing several different trends in the industry. There has been more focus on supply chain optimisation and data-driven production globally, which makes sense as these technologies can have a direct, short-term effect on profitability.

How does uncertainty around Brexit or USMCA (formerly NAFTA) influence your company decision-making around new technology? 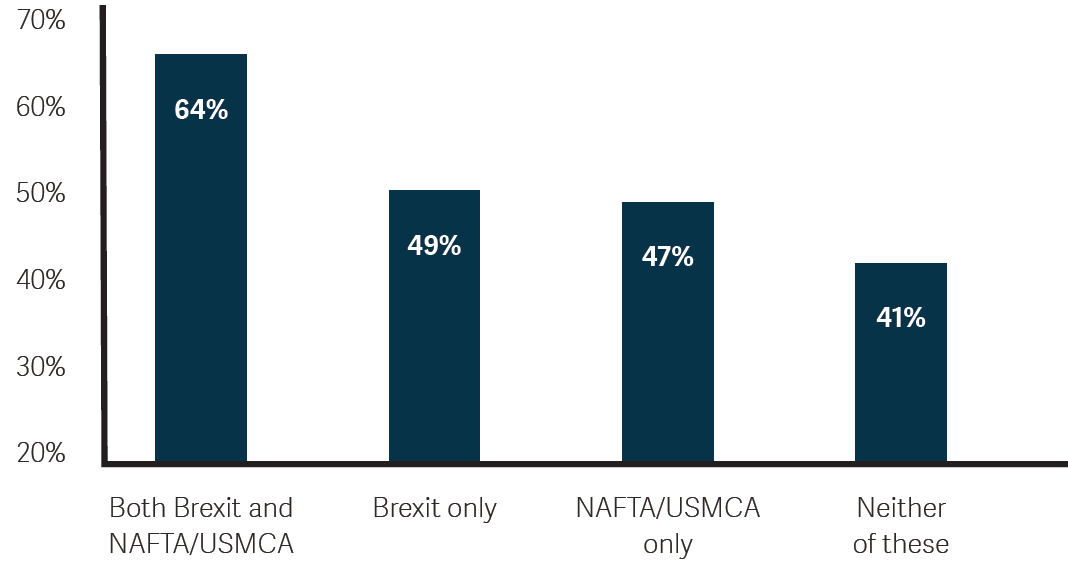 Cyber security threats were also highlighted, particularly in the UK, with businesses looking to protect their intellectual property from attacks over the web.

“The manufacturing industry has been forced to reinvent itself. Fueled by disruptive forces such as digital transformation and Industry 4.0, a major overhaul of key business processes is needed, across product innovation, production, and supply chain,” says Maggie.

“At the same time, the shift from products to services and the need to bypass traditional sales channels to exploit the value-added activities of the digital economy are blurring the lines between industry players and helping the creation of business ecosystems.”

Predrag Jakovljevic adds: “Ongoing market education about the benefits of deploying ERP and Industry 4.0 tools will still be needed, as some manufacturers still believe that outdated systems will keep them competitive in this fast-changing environment.”

So, what are process manufacturers investing in? The research has highlighted the challenges and opportunities around regulatory change, traceability, and the war on talent. For process manufacturers, the main perceived benefit of investment in emerging technology is the reduction of costs, with increased visibility of the supply chain and automation of repetitive tasks coming closely behind.

Again, risk mitigation was less of a priority, which suggests process manufacturers look at technology more as a profitability driver than as a way to reduce risk to the business. It’s about doing more for less – and quickly.

Which of the following trends are you seeing in the process manufacturing industry? (by job role) 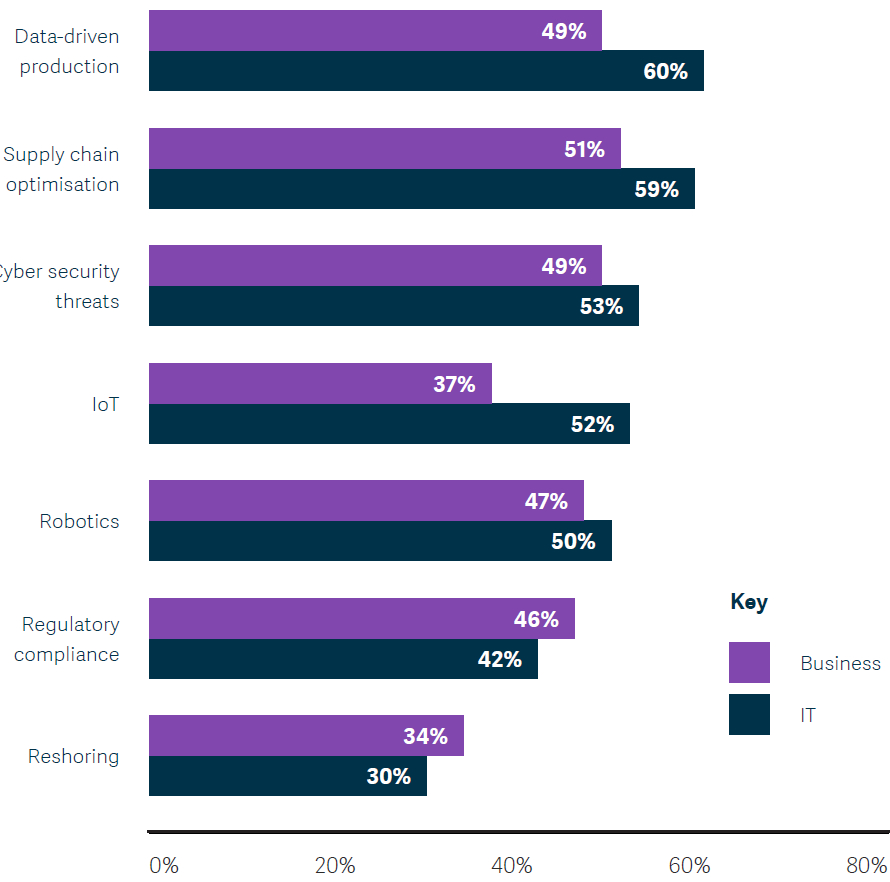 In every industry, finding the right skills is a challenge, comments the report. As millennials meet baby boomers in the workplace, we are for the first time seeing a “multi-generational workforce that wants and needs to be motivated and rewarded in very different ways”.

“Manufacturers in the majority of cases value technical skills over creative ability,” says the report. “But in an industry where more than half of companies state they will almost certainly be impacted by a declining talent pool due to regulations affecting immigration, there is an urgent need to address the war on talent now, in order to win the fight for continued productivity and efficiency.”

“Over half the process manufacturers we spoke with said that a lack of traceability posed a risk to their brand, and around a third went as far to say there was a risk to life,” comments the report. “As consumers become hyper-aware of what they are consuming, their demands to understand food provenance are increasingly being met by process manufacturers, who take safeguarding against contamination incredibly seriously.”

Industry 4.0 and emerging technologies are transforming the approach to the authentication and traceability of products, with the Internet of Things digitising supply chains and artificial intelligence providing faultless analysis.

Technologies such as automation, robotics, and blockchain, as they rise in prevalence, are proving to be more than a point of focus in Hollywood’s next blockbuster. These technologies are making a difference today by increasing productivity, and freeing manufacturers to focus on the important stuff.

“There is a continuing importance of humans in manufacturing despite the hype around robots, AI and automation, and this won’t change,” says Hazel Copeland, CFO at Woldmarsh, a farmer-owned agricultural buying group. “What’s important is that manufacturers audit their processes and identify which low-skill, manual, and repetitive tasks can be handled by these technologies, enabling them to establish what tasks should be left to humans.”

Hazel continues: “Automation isn’t new but will certainly climb in popularity over the next 12 months and, eventually, become ubiquitous among manufacturers. It can relieve teams from mundane and repetitive work to focus on higher-value and strategic activities, and it’s something we experience first-hand. Moreover, it is easier to access, expand and scale than other technologies like AI.”

Perhaps the biggest takeaway from the research is that it shows a sector undoubtedly facing change and uncertainty, but one that is taking charge of its own destiny, with professionals pushing forward with plans that will not only mitigate issues, but also help build for a brighter future.

Regulatory changes are of concern, but globalisation and expanding into new markets is still very much part of the game plan, suggesting confidence and a hunger for growth is widespread.

That said, with that global ambition comes a shift that does look inwards, as many are exploring more closely where materials are sourced, and supports a growing rise for onshoring. As part of the evolution, technology is seen by the majority who took part as playing a key role in shaping the industry of the future.

Its impact is not just being felt in terms of helping to optimise supply chains and paving the way for a more data-driven approach, but also shaping the workforce of tomorrow.

Opinions around the state of the manufacturing sector are never short. The public and politicians on both sides of the Atlantic can be regularly heard lamenting the ‘decline of our industrial sector’ or saying things like ‘we don’t make things in our country anymore’. Too often though, those opinions are based on hearsay and come from the outside looking in.

To gain an uncensored view from the factory floor, we invited more than 900 of your fellow professionals from mid-sized manufacturing businesses in the UK, US and Canada to share their thoughts and plans on business strategy, access to talent, technology adoption and how environmental factors are impeding their opportunity to grow.

We were interested to hear how in an uncertain world, the people that make some of the world’s most widely used and important products are coping as we step into the third decade of the 21st century. What challenges and opportunities are keeping them awake at night? How are they planning for change? 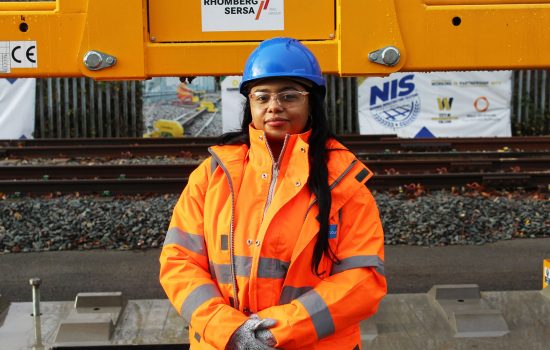