Flying over Douglas bay it strikes me that there’s a slight juxtaposition to the Isle of Man’s (IoM) reputation. On the one hand you have an island internationally renowned for offering unique outdoor experiences, combining adventure, heritage and culture – not least of which is the annual TT races, the world’s longest-running high-speed motorcycle event.

The stunning landscape on display – encompassing rolling hills, picturesque farmlands, dramatic coastal scenery and secluded glens – seems to be at odds with the Island’s other distinction, being a hub for high value, niche, precision engineered components.

But for many, this thriving status is of little surprise as engineering is most definitely in the Manx (native islanders) blood. There are numerous examples of the Island’s rich engineering history at sites such as the world famous Great Laxey Wheel, and associated working mechanisms, which drive the pumps that once cleared the surrounding mines of water.

This industrial legacy isn’t a feature buried in the Island’s long distant past, the innovation and skill on display today is just as striking, if not more so. The creation of the Isle of Man Aerospace Cluster (IOMAC) in 2006 builds on this legacy and provides a support structure for the Island’s aerospace sector to pursue even greater global recognition.

Chairman of the IOMAC, Adrian Moore tells me that the Cluster drives forward a sector which has had a presence on the Island for more than 60 years and whose members have a direct customer order book related to aerospace design, manufacture and service provision.

“The Cluster is a partner to every major civil and military aerospace product programme in the world today, including the Airbus A380 and A350; the Joint Strike Fighter; the Rolls-Royce Trent Engine Family, and the Curiosity Mars Rover,” he says.

A key early achievement of the IOMAC was the forming of a strategic partnership with Europe’s largest aerospace cluster, the North West Aerospace Alliance – headquarted in Preston, Lancashire. According to Moore; “This provides access to one of the most dynamic and important aerospace clusters, and though IOMAC contains several significant companies, this partnership has proved particularly beneficial for the smaller firms in the cluster.”

Having been established on the IoM in 1955, Manx Engineers falls into the former category. Following a management buy-out in 2009 and supported by Government machinery and training grants, the company has achieved an impressive growth rate in excess of 30% a year. 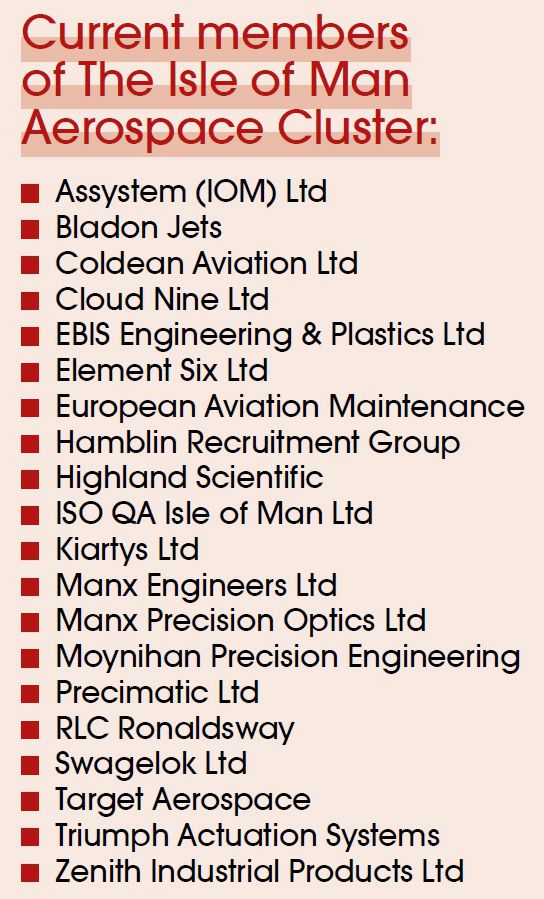 Manx Engineers is one of the founding members of IOMAC and its assertive investment programme has seen new Citizen and Mazak CNC millturn machines being installed and paying dividends. A similar proactive approach to staff development has seen the company achieve an average employee age of 35 – far lower than the industry norm.

The company’s Martyn Perkins says that being part of IOMAC allows the group to punch well above their individual weight, as well as pooling information and disseminating intelligence that members otherwise wouldn’t be aware of.

As well as being an engineer – a tool maker by trade, Moore is also engineering and space development manager for the Isle of Man’s Department of Economic Development. “I understand our member’s culture, business and, importantly, the challenges they face,” he says.

“The Government works with each business to ensure they stay ahead of the competition curve, and one of our most successful Government programmes ever has been the Financial Assistance Scheme. Governments providing money to companies may not be a new concept, but what makes ours unique is that it’s based on deep relationships and the fact that it isn’t a one-hit initiative, rather a long-term partnership.”

Moore goes on to say that UK Local Enterprise Partnerships (LEPs), for example, have to consider bids with outcomes measured on a much grander scale, such as the creation of dozens, if not hundreds of new jobs. The IoM Government focuses more on stability, protecting the jobs which already exist and creating sustainable jobs moving forward.

Thanks to this level of Government financial support, recent years have seen IOMAC invest in lean cellular manufacture, flexible manufacturing systems and in its R&D capability.

Rolls-Royce’s business improvement programme, Journey to Process Excellence, is currently being rolled out across the Cluster, and members have also benefitted from a number of joint purchasing agreements, enhanced marketing support, and increased purchasing power.

Government support is also what Nigel Brown, managing director of RLC Ronaldsway, cites as being the biggest opportunity the IoM offers. Having recently joined the aerospace manufacturer and system integrator, Brown notes that the IoM Government genuinely wants to help businesses develop and grow, and is keen to hear ideas to that effect.

When questioned about the biggest challenge facing business on the Island, Brown says that firms have to be prepared to invest in the training and development of their current workforce, alongside engaging with the local community to encourage the next generation through. [See Advanced Manufacturing Training Centre box] 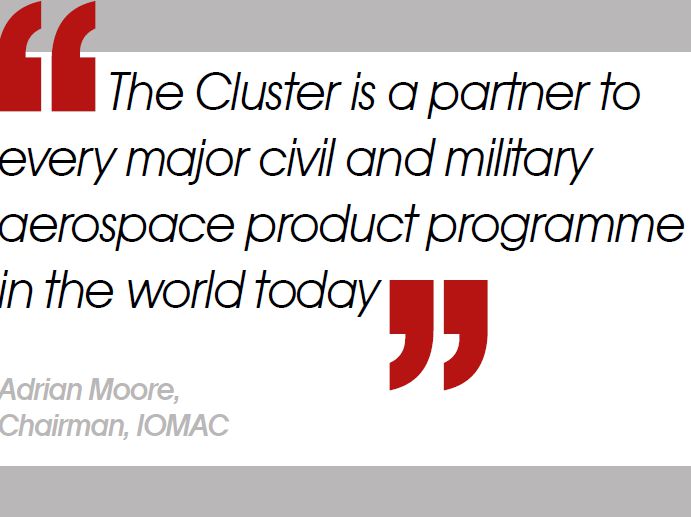 RLC Ronaldsway is typical of many IOMAC members, with around 70% of its output going into the UK, versus 30% going elsewhere. Brown describes the current relationship with the UK as important to the business, but anticipates that this will change with a number of new contracts expected to be signed imminently. One of which is worth £2.5m a year to supply into Poland and Germany.

With the aim of swelling the Cluster’s numbers, Moore explains that the focus isn’t explicitly on aerospace. “We called it IoM Aerospace Cluster, but we could have just as easily called it the IoM Precision Engineering Cluster as the vast majority of work undertaken is aero-related, but not every member is an aerospace company,” he describes.

Ultimately, it came down to the international standards for which aerospace is regarded, with the sector lauded as being one of the pinnacles of engineering. “If you can manufacture components for aerospace, you can supply almost any other sector. We chose Aerospace Cluster as we are working to that criteria and helping our members to understand that philosophy,” Moore continues.

When asked whether the stretch of water – narrow though it may be – that separates the IoM from mainland UK poses any issue, Moore is assertive in his reply. “Logistically we are rock solid, we wouldn’t be thriving as an island today if that wasn’t the case. The water can be a slight inconvenience, but the components IOMAC produces are high value, low volume and low mass, so shipping costs are typically a miniscule fraction of overall costs.

“The other consideration is that it’s far quicker to fly something from the IoM to London than it is to ship the same product by road from Glasgow because it goes direct,” Moore adds.

With the Cluster rapidly approaching its tenth anniversary, the questions remains – has it been successful? According to the latest IoM Government figures, more than 880 people are directly employed by the IOMAC, an almost 40% rise since the Cluster’s inception in 2006.

“With a five year strategy for growth in place, the Cluster has thrived because of its agility and adaptability. We have a clear vision and are committed to remaining a partner in excellence with our customers,” Moore concludes.

In 2006, IOMAC, the Chambers of Commerce and the IoM Government realised that they were facing a potential shortage of skilled engineers. Like many other nations around the world, the first task was to address the negative perceptions associated with engineering (and manufacturing).

The first step was to sponsor a Skills Champion who – since 2007 – has been holding sessions with every year group, in every school on the Island discussing what modern engineering is; what the industry means to the Island and to the world; what qualifications are required; what the typical starting salary is, and what opportunities such a career presents.

Dubbed Awareness of Careers in Engineering (ACE), the programme has been highly successful, perhaps too successful. Within three years of it starting, a company who was typically receiving 20 applicants for its six annual apprenticeship positons unexpectedly received 175 applicants.

The company filled its six places, but a large number of students who had shown a desire to become engineers had been left disappointed. As a result, the Island has recently unveiled two new advanced engineering training facilities, representing a combined Government investment of £6m. 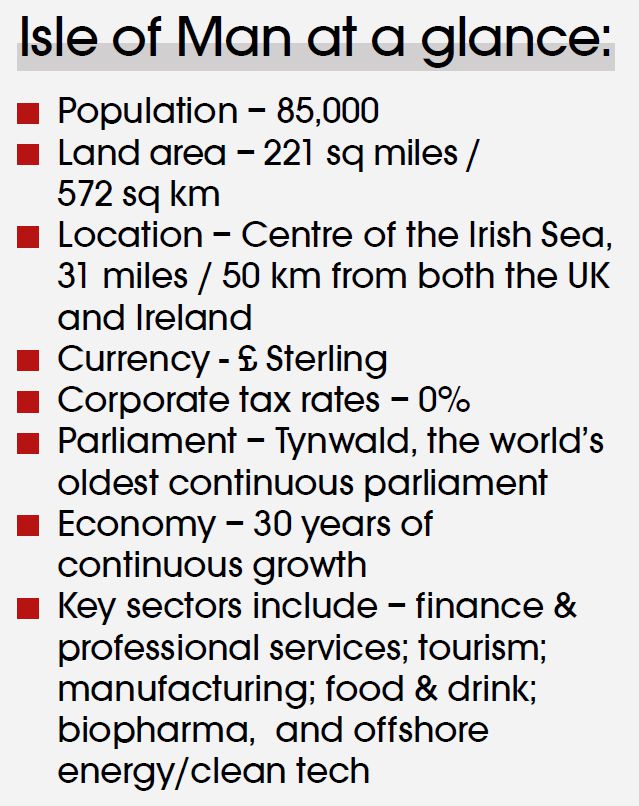 The Advanced Manufacturing Training Centre – located just outside the heart of the capital, Douglas – is dedicated to creating the next generation of precision machinists and engineers. The William Kennish Building concentrates on other areas including electronics; mechanical engineering; fabrication, and mechatronics.

The new Foundation Apprenticeship in Engineering offers 36 people each year the opportunity to study full-time for two years and enter a third year based in industry well-equipped to take on the challenges of this most demanding and dynamic of industries.

Thanks to increasing the range of vocational pathways offered by the Isle of Man College of Further and Higher Education – including a Foundation Apprenticeship in Engineering which takes students through the Advanced Manufacturing Training Centre – there are now enough talented young engineers being produced to fulfil immediate demand, as well as helping to meet future demand based on retirements, projected growth and inward investment.