The Manufacturing Automation and Robotics Symposium 2021 took place on 20th May and had a stellar line up of speakers. Over the next few days, we will be recapping the virtual event and bringing you the key takeaways to help you on your business on your own automation journey.

My afternoon’s virtual discussion room at this year’s Manufacturing Automation and Robotics Symposium included insights in to ‘How automation is changing the workforce.’

A simple fact of the manufacturing industry is that for advancement to happen, people must embrace new technology. Fears remain that robots will be doing everyone’s jobs in years to come, making workforces obsolete. However, workers are being told not to panic; people were not made redundant during the last industrial revolution, and even with the emergence of Industry 4.0 technologies like automation and robotics, they will not be made redundant now.

The benefits and switches to such technologies are obvious. Most manufacturers automate tasks that are repetitive, straining and time-consuming for people to perform. With automation, the human workforce can move to roles that require more soft skills, such as collaboration, communication and problem-solving. 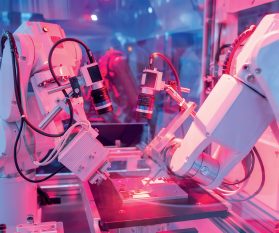 Automated dashboards and systems allow for better, more accurate data collection. Again, tasks like these are time consuming without the use of such systems. Previously, a department may have provided the same data, but a few days late.

Delegates from the day spoke about how the transition to such technologies does, at first, cause some trepidation within the workforce. However, manufacturers are asking their workers to understand what automation can bring to them and are encouraging them to change their ways of working.

The panel on the MARS virtual event were eager to point out, that improvement and training of skills that aren’t automated; soft skills such as interpersonal and emotional intelligence, will be key moving forward. Such skills are extremely useful to successfully working with robotics and automation systems.

One of the speakers referenced a success story where a former apprentice in his company had gone from an apprenticeship scheme, to the shop floor and on to a senior automation engineer role. The engineer’s communication and interpersonal behaviours were cited as being perfect for such a role.

While the implementation and improvement of soft skills is key, automation systems do also require hands on skills and knowledge, of course. The panel agreed that the application of training is key in such areas, but workers will find technologies far less daunting the sooner they’re in control of them. You can sit in a classroom all you want, but there’s no substitute for hands on experience.

Reflecting on what the panel had to say about how their workforces should be adapting, here are some key takeaways.

Automation and robotics are putting some of the workforce out of their comfort zones, but by no means are they putting them out of a job.

Other keynote events include: Implementation and Operating Strategies for Automation Projects